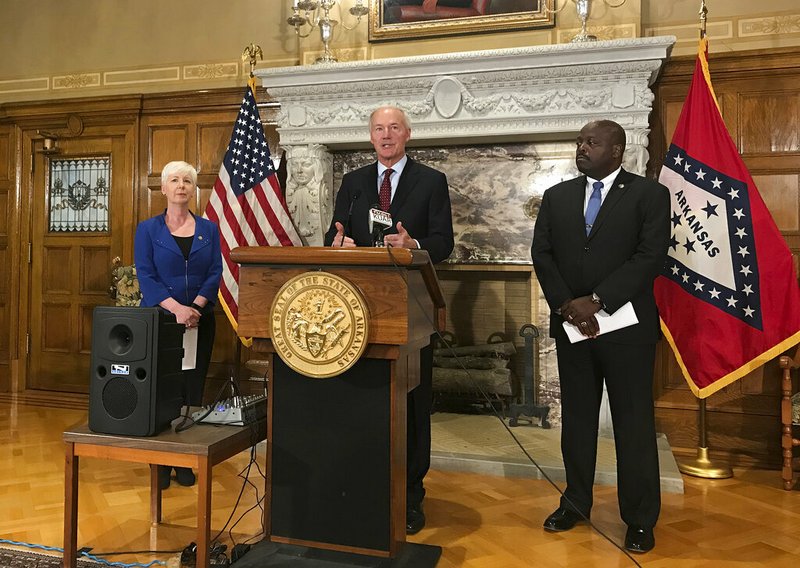 In this Sept. 12, 2018, file photo, Arkansas Gov. Asa Hutchinson, center, talks at a news conference at the State Capitol in Little Rock, Ark., about the state's work requirement for its expanded Medicaid program. Federal judge James Boasberg is blocking Medicaid work requirements in Arkansas and Kentucky, dealing a blow to the Trump administration's efforts to push the poor toward self-sufficiency.

The coverage losses stemming from Arkansas' Medicaid work requirement were "due in large part to the fact that participants could report compliance through an online portal only," federal officials said in a court filing Tuesday.

That issue was addressed when Arkansas "expanded the reporting options to allow reporting over the phone and in person," the officials said.

U.S. Department of Justice attorneys, representing the federal Department of Health and Human Services, made the argument in a filing in support of their request for expedited consideration of their appeal of a judge's ruling that struck down work requirements in Arkansas and Kentucky.

To stay in compliance with Arkansas' requirement, Arkansas Works enrollees had to spend 80 hours a month on work or other approved activities and report what they did using a state website.

The state added an option in December for enrollees to report over the phone.

Enrollees who failed to report for three months during a year were kicked off the program and barred from re-enrolling for the rest of the year.

Last year and in January, 18,164 Arkansas enrollees lost coverage for noncompliance. The March 27 ruling in the state's case by U.S. District Judge James Boasberg of Washington, D.C., prevented thousands more enrollees from losing coverage this month after they failed to report for the first three months of this year.

Kevin De Liban, an attorney with Legal Aid of Arkansas, said it's "factually and demonstrably false" that Arkansas added an option for enrollees to report in person on their compliance with the requirement.

Enrollees could access the website, access.arkansas.gov, at a Department of Human Services office, but they didn't receive any help creating an account on the site or reporting their hours or exemption status, said De Liban, whose Jonesboro-based organization is one of three advocacy groups that challenged Arkansas' requirement in court on behalf of several enrollees.

"What somebody would do is sit you down and turn the kiosk on, or help you get on the kiosk, and get you to access.arkansas.gov, and that's it," he said.

The phone reporting option, which often involved spending 45 minutes to an hour on hold and being transferred to multiple people, didn't improve compliance, he said.

In January and February, about 5 percent of the enrollees who were required to report hours of work or other activities did so, down from about 9 percent in December and 6 percent in November.

Most enrollees subject to the requirement were exempt from reporting hours, based on information in state records or that the enrollee reported.

In January and February, "the compliance rates were just as dismal as they had been before," De Liban said. "Clients had just as hard a time reporting as they did prior to the phone reporting option."

Arkansas Department of Human Services spokesman Amy Webb said employees were available at the department's offices around the state to help enrollees use the state website.

Even before December, she added, enrollees could designate a friend or relative as a "registered reporter" who could log onto the website on their behalf.

She also noted that insurance companies offering Arkansas Works plans had employees trained as registered reporters who could report through the state website for enrollees who called the companies to report hours or claim an exemption.

Arkansas Works covers people who became eligible for Medicaid through the state's expansion of the program in 2014 to adults with incomes of up to 138 percent of the poverty level. Most enrollees receive the coverage through private plans, with the Medicaid program paying most or all of the premium.

Boasberg ruled that President Donald Trump's administration, in approving work requirements in Arkansas and Kentucky, violated the federal law governing Medicaid by failing to consider the effect the requirements would have on the program's goal of providing health coverage to needy people.

Federal officials have argued that work requirements promote the fiscal sustainability of Medicaid by prodding enrollees to find jobs and move off the program. They also argue that people who work tend to be healthier than those who are unemployed.

Plaintiffs in the two cases argue that state and federal officials' attempt to overturn Boasberg's rulings don't warrant expedited consideration by the U.S. Court of Appeals for the District of Columbia Circuit.

In Tuesday's filing, Justice Department attorneys noted that the Trump administration did not object to having Boasberg consider them on an expedited basis at the trial level.

The judge's rulings are "of major significance with immediate impact on the state programs," the attorneys said.

A ruling hadn't been made on the request for expedited consideration of the appeal late Tuesday.