On base is place to find red hot Goodheart 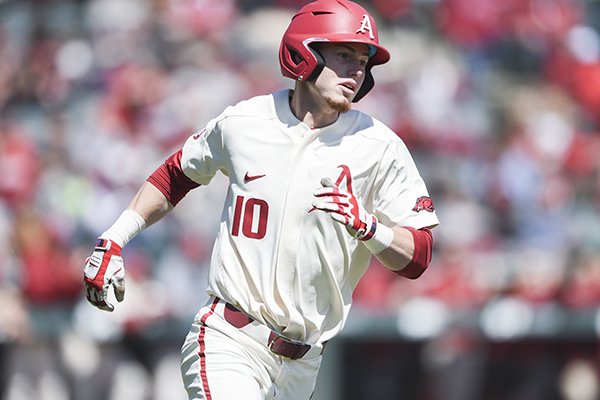 Arkansas designated hitter Matt Goodheart runs toward first base during a game against Ole Miss on Sunday, March 31, 2019, in Fayetteville. ( Charlie Kaijo)

FAYETTEVILLE -- When University of Arkansas designated hitter Matt Goodheart bats this season, there's a 50-50 chance he's going to get on base.

Matt Goodheart at a glance

NOTEWORTHY Has a team-high .404 batting average in 32 games along with 22 RBI and 16 runs. … Has 1 home run, 10 doubles and 1 triple. … In SEC games only, leads conference with .480 batting average and .574 on-base percentage. … Transferred to Arkansas this season from San Jacinto (Texas) Community College, where as a freshman he batted .355 with 7 home runs and 43 RBI. … Father, Steve, won 764 games in 23 seasons as Southern Arkansas University’s coach.

Goodheart, a left-handed hitting sophomore from Magnolia, has a .500 on-base percentage going into the No. 10-ranked Razorbacks' series opener against No. 2 Mississippi State at 8 tonight in Baum-Walker Stadium.

In SEC games, Goodheart's on-base percentage is .574 to lead the conference.

"His on-base percentage is through the roof right now," Arkansas Coach Dave Van Horn said. "It's because he's been patient. That leads to walks and getting better pitches to hit."

Goodheart improved his batting average to .404 (40 for 99) by going 2 for 2 in the Razorbacks' 16-4 victory over the University of Arkansas-Pine Bluff on Tuesday night. He also had three walks to raise his season total to 18.

Including Arkansas' series at Vanderbilt last week, Goodheart is 8 for 13 with 5 walks in his past four games.

"Just keeping the same approach and taking advantage of mistakes," Goodheart said. "Trying to stay off of the pitches out of the [strike] zone and trying to hit the ones that are very hittable.

"Whenever you get to two strikes, the approach shifts. You're trying to fight off the ones that are close -- and not leaving it up to the umpire is very important."

Goodheart, who batted .355 for San Jacinto (Texas) Community College last season, hit .241 (7 for 29) with 9 strikeouts and 2 walks in his first seven games with the Razorbacks when he was sharing DH duties with Jordan McFarland and Trey Harris.

Then Goodheart's father -- Steve Goodheart, who had a 764-406-5 record as Southern Arkansas University's coach from 1981-2003 -- suggested it might be a good idea to see whether he needed new contact lenses.

"I talked to my dad, and he said to maybe just run by the eye doctor to see if there's anything that's changed," Goodheart said. "You might not be able to notice anything, but just the little differences matter."

Goodheart got new lenses and wore them in a game for the first time when the Razorbacks opened SEC play against Missouri on March 15. He went 4 for 8 in the series against a Tigers pitching staff that is holding SEC opponents to a .220 batting average.

"The contacts that I had, they got really dry at night and I wouldn't be able to pick up spin [on the baseball] as easily," Goodheart said. "That carried over into, of course, your confidence."

"At the beginning of the year, he kind of struggled," Arkansas shortstop Casey Martin said. "But when he got new contacts, he blew up. I'm happy he's on our team, I can tell you that."

Goodheart said the change of lenses hasn't made as much difference as a lot of people might believe.

But how do you argue with the numbers?

"I don't know all the details," Van Horn said of Goodheart's transformation at the plate. "I just think he needed to get some things straightened out, and obviously maybe increase those lenses a little bit.

"The key to hitting is seeing the ball -- seeing the spin. Especially at night, you've got to be able to see. He's hit during the day, he's hit at night, and we're glad he's here."

Goodheart said going 2 for 3 against Missouri in his first game with the new lenses helped him feel more comfortable.

"It's definitely a confidence-booster being able to relax at the plate and hunt pitches," he said. "Pitches from good pitchers, especially. It makes a huge difference."

Arkansas showed interest in Goodheart when he played at Magnolia High School, but Van Horn said when he spoke with Steve Goodheart that it was mutually decided it would be best if he played at San Jacinto as a freshman.

"We had a veteran team last year," Van Horn said. "It would have been hard for him to get in the lineup as a true freshman."

Van Horn said he and pitching coach Wes Johnson -- who is now with the Minnesota Twins -- watched Goodheart play last season before the Razorbacks' series at LSU. They told him they wanted him to come to Arkansas as a sophomore.

Being able to start at San Jacinto rather than possibly see limited playing time at Arkansas last season, Goodheart said, was a huge benefit. He helped lead the team to a 52-15 record and the Junior College World Series.

"I decided to go the junior-college route, and I'm glad I did," he said.

"I mean, I can't expect anybody to hit .400," Van Horn said when asked whether Goodheart has surprised him. "I didn't expect these numbers.

"I thought he could hit, though. I don't want to tell you I didn't think he could do what he's doing, because he's doing it."

NO. 2 MISSISSIPPI STATE AT NO. 10 ARKANSAS

Print Headline: On base is place to find UA's DH