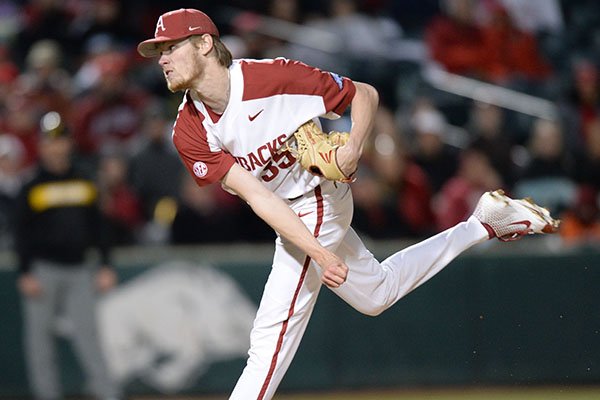 Arkansas reliever Jacob Kostyshock delivers to the plate against Missouri Friday, March 15, 2019, during the eighth inning at Baum-Walker Stadium in Fayetteville. ( Andy Shupe)

FAYETTEVILLE -- The University of Arkansas bullpen will welcome the return this week of sophomore Jacob Kostyshock just in time for a key series against SEC West-leading and No. 2 ranked Mississippi State.

The right-hander has not pitched since facing three batters in relief of Isaiah Campbell in a 5-3 victory over Ole Miss on March 29 and informing the coaching staff he had soreness in his right arm. He missed 11 games.

"He should be good to go this weekend," Arkansas Coach Dave Van Horn said after Tuesday's 16-4 victory over the University of Arkansas-Pine Bluff. "We're excited about getting him back. He's been going full go in his bullpens. He'll be ready to pitch."

Kostyshock has a 1-1 record and a 1.96 ERA in nine appearances, including one start in a scoreless five-inning stint in a 3-2 victory over Eastern Illinois on Feb. 17.

"Kosty is a guy that's huge out of the bullpen," Campbell said Tuesday. "He's a guy that can set it up to get to Matt [Cronin], or he can close a game. He's got electric stuff and he just has a lot of confidence this year."

The Razorbacks raised their team batting average by 12 percentage points to .299 over the past two games by piling up 38 hits and 30 runs. Arkansas outslugged Vanderbilt 14-12 on Sunday in Nashville, Tenn., then beat UAPB 16-4 on Tuesday in seven innings.

The Razorbacks had a team batting average of .287 after dropping the first two games to the Commodores. In the last two games, Arkansas is 38 of 81 (.469) with 14 extra-base hits, including 4 home runs.

First-year Mississippi State Coach Chris Lemonis has steered the Bulldogs (32-6, 10-5 SEC) to a No. 2 ranking and sole possession of first in the SEC West heading into their series at Arkansas.

Mississippi State joined Arkansas as one of the final four teams at the College World Series last year before being eliminated by Oregon State in the Bulldogs' bracket finals.

"They brought back a lot of guys that they had on their Omaha team last year," Arkansas right-hander Isaiah Campbell said. "So they're experienced and they're going to make it tough.

"If you walk them, they're going to make you pay for it and put runs on the board."

UAPB Coach Carlos James brought up Martin while making the bigger point that Arkansas teams under Coach Dave Van Horn heat up with the weather.

"You take Casey Martin," James said. "He's going to keep getting hotter. Coming into the season, he probably thought he had to be the star and was putting too much pressure on himself, and now he realizes he doesn't really have to because the rest of the lineup is pretty strong as well."

The No. 10 Razorbacks and No. 2 Mississippi State will start their SEC West series tonight at 8 p.m. (ESPNU), which will give the players Easter Sunday off from competition.

This will mark the second of four scheduled Thursday through Saturday SEC series for Arkansas. Their first such series, at Auburn two weekends ago, was hit with bad weather on Thursday night, forcing a postponement and a Friday doubleheader. The teams split those games, with Auburn winning 6-3 in the opener and the Razorbacks rallying for a 9-6 victory in 15 innings in the night game.

The Razorbacks and LSU are also scheduled for a Thursday-Saturday series starting on May 9, and Arkansas will travel to Texas A&M the next week on May 16 for another Thursday series start on the final weekend of the regular season.

"I know he was happy to see this come about and is a big supporter of both schools," UAPB Coach Carlos James said. "He obviously was a great player and is a great person, and it was great to have him here and getting to see this happen."

Hunter signed with the Razorbacks under Coach Norm DeBriyn out of Pine Bluff High School, but he wound up being taken with the 20th pick in the first round of the 1993 MLB Draft by Minnesota. He signed with the Twins and hit .277 with 353 home runs over the course of 17 seasons with the Twins, Angels and Tigers.