MOVIE REVIEW: 'Teen Spirit' is by no means great, but Elle Fanning’s performance makes it worthwhile 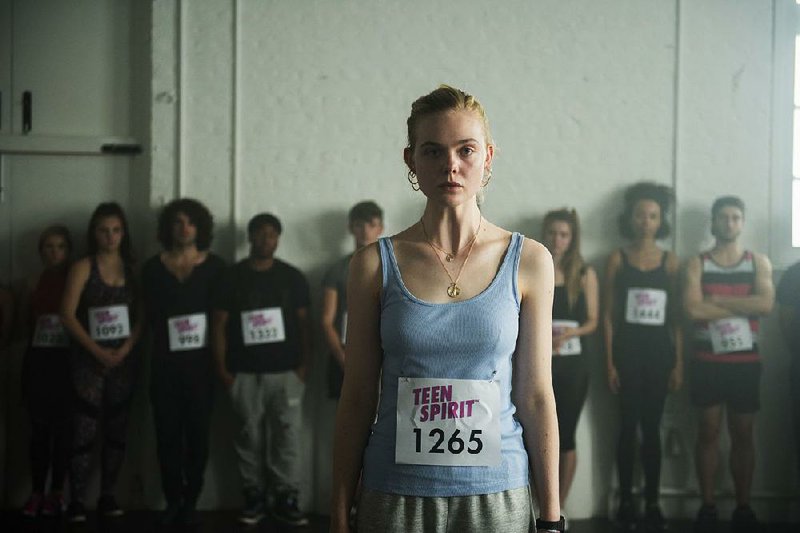 Violet (Elle Fanning) is a poor girl from a remote British island who seizes her chance when an American Idol-like TV show comes to town in Max Minghella’s Teen Spirit.

Max Minghella's directorial debut Teen Spirit is a trifle, a sweet cliche of a movie satisfyingly realized. Like cotton candy, it's not supposed to stick with you, and too much of it will make you sick, but it's difficult to dislike.

It's a retelling of Cinderella set in the absurd world of modern pop music, where televised competitions and larger-than-life Svengalis can make or break an "artist." But Minghella, the 33-year-old son of The English Patient director Anthony Minghella (who died in 2008), has an eye for detail that elevates the film above the usual underdog-teen-overcoming-movie and, in Elle Fanning, a star who is not only credible as a singer but revelatory as she takes on material from hit-makers Ellie Goulding, Tegan and Sara, Carly Rae Jepsen, Sigrid and Annie Lennox.

Rating: PG-13, for some suggestive content, and for teen drinking and smoking

Fanning's vocals are so confident and unforced that a nit-picker might take exception -- she's a lot better than the typical American Idol contestants in that she doesn't confuse impressive vocal gymnastics with artful singing. She's emotive but never over the top, with an offhand, breezy quality that rises above the whispering fashion model trope while steering clear of the eight-notes per vowel style affected by so many TV-centric belters.

As good an actor as she is, we might expect Fanning to understand the power of intimacy, reserve and nuance -- we might expect that she also has a pro-quality set of pipes.

It's ironic that Minghella, who reportedly has been planning this film since 2009 (when Fanning would have been 10 years old), was lucky enough to land her when any number of actors would have been good enough for the film's purposes.

Natalie Portman was perfectly fine as a resurgent pop star in last year's Vox Lux -- the movie called for her voice to be digitized into pop perfection, the vacuity was intentional. (Portman is a better singer, or at least a better artist, than her Vox Lux character Celeste.) And Teen Spirit would have survived with a lesser singer in the lead role, although it would have seemed a much more ordinary film.

The plot is predictable enough. Fanning plays Violet Valenski, a sensitive British girl living with her Polish immigrant single mother (Agnieszka Grochowska) on the poor side of the Isle of Wight (birthplace of Anthony Minghella). Violet is shy, sensitive and dutiful, supplementing the family income through farm labor and table busing. She loves horses, but music forces through her, and she lives an alternate fantasy out at the local pub, singing covers to bewildered middle-aged punters. She believes she's destined for stardom.

When a singing game show lights on the island she secretly secures an audition and nails it. She makes it to the second round and acquires a mentor, a bearish down-on-his-luck Croatian opera singer named Vlad (Zlatko Buric). He will sign the forms Violet's mother needn't know about.

Despite the usual conflicts involving the star-making machinery -- Rebecca Hall arrives as a distaff Simon Cowell type to snap the movie briefly into a more naturalistic mode -- it's not difficult to predict the trajectory of the film. Fairy tales end as fairy tales end and while Minghella, who's best known for his role opposite Elizabeth Moss on Hulu's The Handmaid's Tale, and Fanning have grown up immersed in film, they both understand what this movie is about. It's a first step -- not tentative, but no one's risking all that much either.

It's well shot by cinematographer Autumn Durald, who dresses it all in a soft-focus haze that gives way to oil slick neon in the performance scenes.

Teen Spirit is by no means a great film, but Fanning's performance is affecting and Buric makes an adorably gruff fairy godfather. It will be a crowd pleaser and will do well enough with the demographic that might buy -- I mean stream -- the soundtrack. 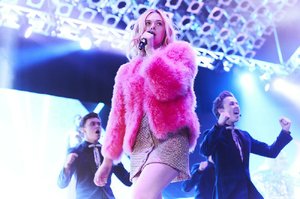 Violet (Elle Fanning) is transformed from an introverted teenager to a prowling vocal dynamo in Max Mingehella’s Teen Spirit.