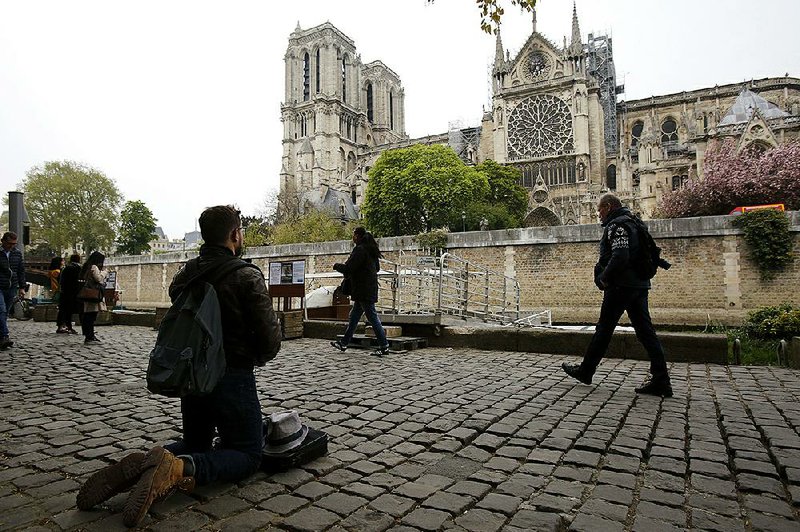 A man kneels as people came to watch and photograph the Notre Dame cathedral after the fire in Paris on Tuesday . Experts are assessing the blackened shell of Paris’ iconic Notre Dame cathedral to establish next steps to save what remains after a devastating fire destroyed much of the almost 900-year-old build- ing. With the fire that broke out Monday evening and quickly consumed the cathedral now under control, attention is turning to ensuring the structural integrity of the remaining building.

VATICAN CITY -- The soaring beauty of Paris' Notre Dame Cathedral as it echoed with Gregorian chants so moved French poet Paul Claudel on Christmas Day 1886 that the avowed atheist converted to Catholicism on the spot.

"In an instant, my heart was touched and I believed," Claudel, who remained a committed Catholic until his death nearly seven decades later, wrote of the religious transformation that is commemorated with a plaque on the floor.

While the imposing Gothic cathedral has become a tourist mecca, Notre Dame remains at its heart a place of worship, a powerful expression of religious reverence crafted from stone. A regular evening Mass was in progress Monday when a fire broke out near the top of the landmark church, and worshippers were evacuated quickly.

The global reaction to images of flames chewing through the roof, up the spire that pointed to heaven before the blaze brought it down, and threatening the entire cathedral made clear Notre Dame was bigger than any one faith still touched the nonbelievers.

Pope Francis and other religious leaders commented on this quality of transcendent universality while offering prayers and technical expertise to help rebuild.

That a cathedral Francis called the "artistic and spiritual patrimony of humanity" went up in flames during Holy Week, the solemn days before Easter when Christians commemorate the death and resurrection of Jesus Christ, intensified the sense of loss and devastation.

Some commentators saw the fire-ravaged structure that represented the height of French Catholicism as a metaphor for the demise of the Catholic Church in Europe, where secular trends long ago emptied pews and drained the priesthood of fresh vocations.

But the outpouring of grief and determined vows to bring Notre Dame back to life seemed to signal that for all the talk of a Catholic crisis in Europe, the French, at least, still see in Notre Dame the essence of themselves.

In a condolence note to Paris Archbishop Michel Aupetit, Francis called the church the "architectural gem of a collective memory." He said he prayed it would retake its place as an emblem of the French nation and its diversity.

Notre Dame draws 13 million people across its portals each year, a significant share of them tourists coming to admire the building's vaulted ceilings, flying buttresses and stained-glass windows. Many visitors also come to worship.

There are four Masses every day except Sunday, when there are five. The Sunday evening service is usually celebrated by the Paris archbishop and broadcast on Catholic television and Radio Notre Dame, reaching the faithful beyond the stone walls.

"Even though it belongs to the French state, it remains a living creature where they celebrate the liturgy, where they have meetings of faith and where even nonbelievers enter to have an experience of beauty," the Vatican's culture minister, Cardinal Gianfranco Ravasi, said.

But Ravasi also stressed that many of Christianity's holiest sites are in constant evolution. While Notre Dame "has a secret spiritual dimension" that makes it a place "where even a nonbeliever senses the transcendent," the spire that collapsed during the fire only dated from the 1800s, he said.

Representatives of religions outside Catholicism made clear the cathedral burning in the center of Paris carried significance for them, too.

An official of the Russian Orthodox Church quoted by state news agency RIA Novosti called the blaze "a tragedy for the entire Christian world, and for all who appreciate the cultural significance of this temple."

The church's secretary for inter-Christian relations, Hieromonk Stefan, also had concern for the safety of Notre Dame's most precious relic, venerated as the Crown of Thorns worn by Jesus Christ. Stefan called it "a sacred object for all Christians."

The Church of England's director of cathedrals and church buildings, Becky Clark, stressed that "no matter the destruction, the spirit of what it means to be a cathedral can and does survive such catastrophes."

"All have been rebuilt, sometimes taking on new forms, to stand as reminders of eternity and resurrection which are the foundation of the Christian faith," she said. 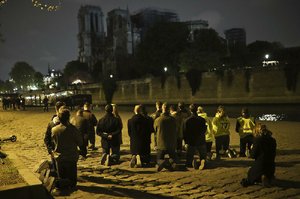 Photo by AP/FRANCISCO SECO
People pray on their knees by the Seine riverside in front of the Notre Dame cathedral in Paris on Tuesday. The inferno that raged through Notre Dame Cathedral for more than 12 hours destroyed its spire and its roof but spared its twin medieval bell towers, and a frantic rescue effort saved the monument’s “most precious treasures,” including the relic revered as Jesus’ Crown of Thorns, officials said Tuesday.