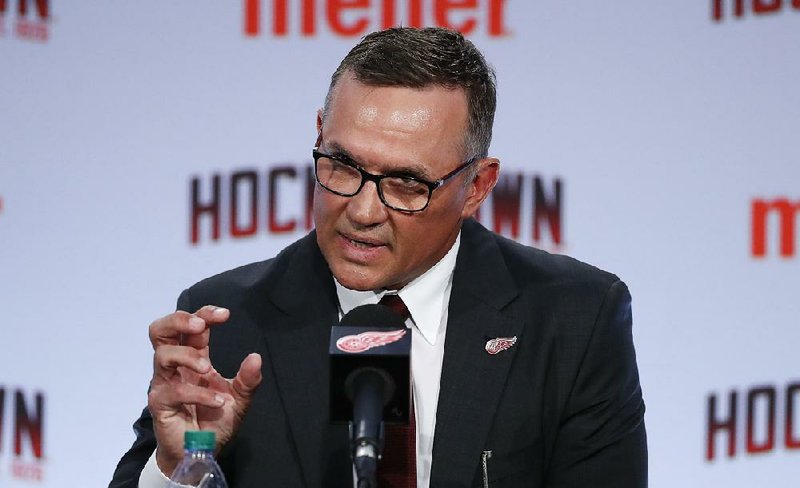 Steve Yzerman answers a question as the new executive vice president and general manager of the Red Wings on Friday in Detroit, where he was a member of three Stanley Cup championship teams.

DETROIT -- The Captain is coming home.

Hockey Hall of Famer Steve Yzerman was named general manager of the Detroit Red Wings on Friday, returning to the franchise where he was part of three Stanley Cup championship teams and a beloved captain for a league-record 20 seasons.

"I'm extremely excited to be back in Detroit," Yzerman said at a packed news conference at Little Caesars Arena.

For the Red Wings, who moved Ken Holland to senior vice president after more than two decades as GM, the return of their fierce, longtime leader whose No. 19 hangs in the rafters alongside those of Gordie Howe and other greats is a welcome sign of hope.

"I did have a feeling that someday we would be together again," said Marian Ilitch, the founder of Ilitch Holdings, which owns the Red Wings.

The man adored by fans and affectionately known in the Motor City as The Captain is back.

"Stevie's a fan favorite in Detroit like no other," Toronto Coach Mike Babcock told reporters as the Maple Leafs prepared to face Boston in the first round of the playoffs. "I remember one night in Detroit in overtime or the shootout, he jumped over the boards and the place started to shake."

Detroit drafted Yzerman No. 4 overall in 1983 and he helped turn around the franchise. As the general manager, he'll have a chance to do it again.

Yzerman is taking the reins of a team that has missed the playoffs three consecutive years in its worst stretch since the early 1980s when the team was known locally as the "Dead Wings" and needed to give away a car at each home game to get people to attend games.

"There's a lot of work to be done," Yzerman said. "We've been through this before."

The Red Wings have been rebuilding under Holland, who has created salary cap space, stockpiled draft picks and developed a core of promising young players such as center Dylan Larkin, 22.

"Kenny Holland has done a real good job setting up so when the general manager came in, he's ready to go contract-wise, draft-pick wise," said Babcock, who coached Yzerman in his final NHL season and worked with him when he led the Red Wings to the 2008 Stanley Cup and Canada to Olympic gold in 2010 and 2014. "He's set up and ready to go. They're good friends, they'll work well together."

Yzerman tried to tone down the excitement his hiring has generated.

"This is going to take time," he said.

Yzerman stepped down as general manager of the Tampa Bay Lightning last year just two days before training camp, triggering talk he would come back to run the Red Wings. Yzerman's contract with the Lightning expired when they were eliminated in the first round of the NHL playoffs earlier this week by Columbus after tying a league record with 62 victories. He built Tampa Bay into a perennial contender in eight seasons as general manager, making three trips to the conference final and an advancing to the 2015 Stanley Cup Final where the Lightning lost to Chicago.

Ilitch said the Lightning gave the Red Wings permission to speak with Yzerman in March about possibly coming back to Detroit.

Yzerman went into management immediately after retiring and Holland was his mentor in the front office. He began his post-playing career as vice president of hockey operations under Holland in Detroit and was part of the organization as a Stanley Cup winner in 2008 before leaving to lead the Lightning.

"[Holland] has been a teammate, way back in the day, a scout for this organization, my general manager and a great friend," Yzerman said. "He has been my mentor."

Yzerman spent his entire playing career with the Red Wings. He is regarded as one of the best leaders in NHL history and developed into a two-way player under Hall of Fame coach Scotty Bowman after breaking into the league as a skinny, 18-year-old kid from Cranbrook, British Columbia, who was talented enough to score 39 goals and have 87 points as a rookie.

His body broke down over time and his 22-season career ended with his retirement in 2006 after leading the Red Wings to titles in 1997, 1998 and 2002. His career ended with 1,755 regular-season points, a total that led all active players when he retired and trailed just five in NHL history.

"I knew he would want to get back home," Bowman told The Associated Press. "It has been nine years. It's time. Home is home."