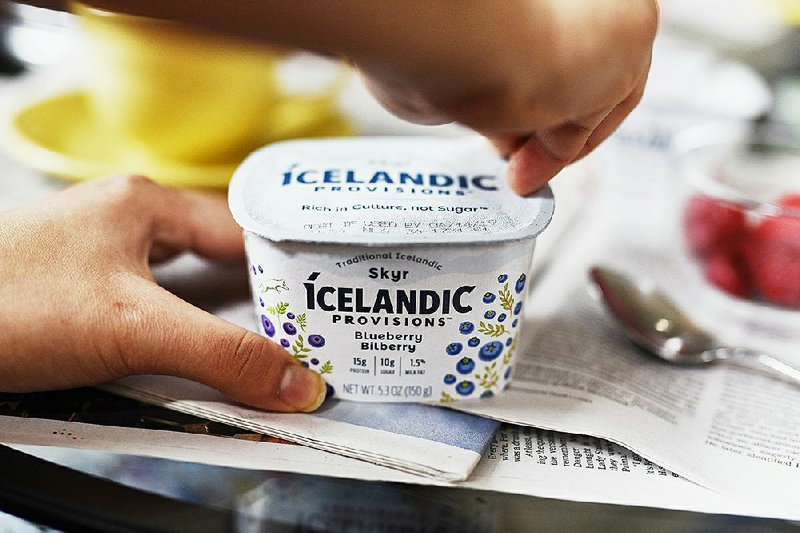 A container of Icelandic Provisions Skyr blueberry yogurt is arranged for a photograph in the Brooklyn Borough of New York, in late March.

It's high in protein, low in sugar and just right for the struggling American dairy industry.

It's Icelandic yogurt, also known as Skyr, and as the meteoric popularity of the Greek product fizzles, farmers are hoping the new variety will help lift them out of years of lackluster demand. A big reason dairy producers love it: Recipes for one pound of Icelandic yogurt call for four pounds of milk -- four times the amount needed to make traditional yogurt.

U.S. dairy farms could use some good news. For more than four years, retail milk prices have been disappointing, and farmers are reacting by slaughtering more cows than they can replace. In July, a gallon of whole milk cost $2.84 a gallon, the lowest price since at least 2007, according to the U.S. Department of Agriculture. In March, the price of a gallon stayed below $3 for a 15th straight month.

It's a different story for Icelandic yogurt. While U.S. yogurt sales dropped 3.4 percent in the 12 months ended in February, the Icelandic style jumped 24 percent to $173.9 million, Nielsen data show.

The Viking invasion is "one of the few bright spots," said Icelandic Provisions Chief Executive Officer Mark Alexander, who took the helm of the yogurt maker two months ago.

Alexander is a former executive at Campbell Soup Co., where he led the acquisition and growth of Plum Organics baby food. Now he says he plans to repeat that success at the three-year-old yogurt maker, whose sales last year doubled each quarter. The 20-employee company is backed by Boston-based Polaris Capital Management.

Siggi's, another maker of Skyr, is also hoping for big growth. The New York-based company buys milk from farms in upstate New York, Wisconsin and Pennsylvania.

Icelandic yogurt is thicker than Greek yogurt. That's accomplished by separating water and whey from the milk, leaving behind more solids.

"Greek yogurt breathed new life in the category, but since its introduction, there's been little innovation," said Darren Seifer, food and beverage industry analyst at research firm NPD Group Inc. "The yogurt category is in need of news."

Lack of excitement has hurt the dairy industry, analysts contend. At Star Rock Dairy in Pennsylvania, revenue has been down about 20 percent as shoppers opt for plant-based milks and non-dairy foods. Co-owner Rob Barley says he's supportive of anything that uses more milk. He says new high-protein items, like Icelandic yogurt, are the future of the dairy industry.

"That's just the way society is," Barley said. "They always want to try something new. That's a big disadvantage we've had in the dairy industry."

Skyr remains a niche item in a mature market, and it's too early to tell if it will help yogurt sales, which have waned since the bump of the Greek boom. Annual U.S. yogurt consumption has been declining since 2014, with the average American eating 13.7 pounds in 2017, the latest year data is available, according to the USDA. One-third of Americans don't ever buy yogurt and it's unlikely they'll start, according to research company Mintel.

With consumers, the thicker, creamier yogurts like Skyr have an edge over the sweet, thinner kinds. A 5.3-ounce cup of Dannon yogurt with strawberries on the bottom has 22 grams of sugar. The same size cup of Siggi's has half the sugar and three times the protein. That's an attraction for U.S. shoppers.

"Icelandic yogurt, it really follows the simply-better-for-you trend," General Mills Inc. CEO Jeff Harmening said in an interview late last year. General Mills is seeing growth with a newer French-style yogurt. But its Skyr offering, dubbed YQ by Yoplait, "hasn't been as successful," and the company is tweaking the formula, he said more recently.

"The idea, people like a lot," Harmening said. "But we need to make sure people like the taste."

With the success of Greek yogurt, producers have gone international in the hope that one of them will catch on. There's Bavarian Quark, made by Commonwealth Dairy in Vermont. Like Skyr, it's rich and creamy, a "marriage of yogurt and cream cheese," according to its maker's website.

There's also French, like the kind General Mills is making, and a Bulgarian variety produced by White Mountain Foods in Austin, Texas. It's packed in glass jars, which the company says preserves the flavor better than plastic.

Siggi's introduced a no-sugar-added line and recently began selling its yogurt with a side-cup of nuts and dried fruit. Icelandic Provisions is making a new extra-thick Skyr that it plans to launch in July that's 7 percent milk fat, compared with 1.5 percent for its regular variety.

The Upstate Niagara Cooperative in Buffalo, N.Y., with more than 300 members, began selling milk to Icelandic Provisions in January. John Gould, a dairy farmer on the co-op board, says capital for new products has been a "stumbling block" for the industry.

"As dairymen, we have to continually innovate to match consumer preferences," said Gould, a partner with the 200-cow Har-Go Farms in Pavilion, N.Y. "Icelandic yogurt is a great new entry. It's an excellent user of milk."

-- Information for this article was contributed by Deena Shanker of Bloomberg News.