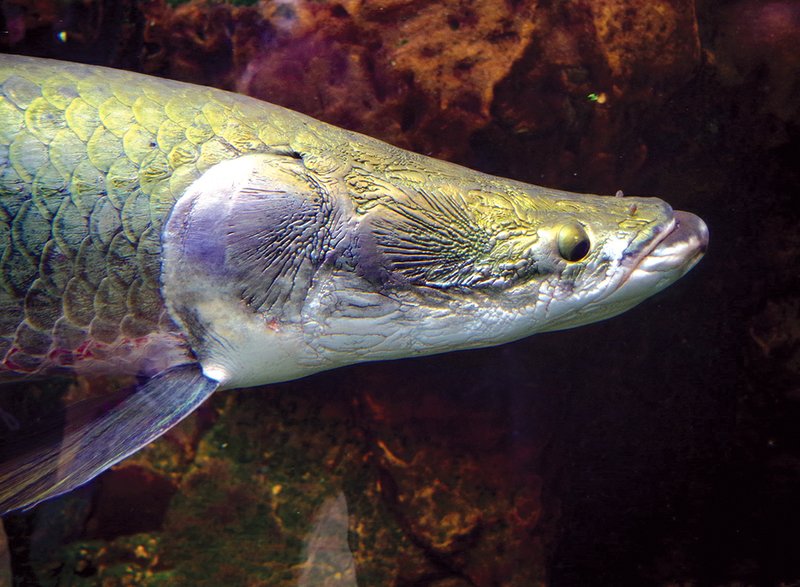 Each year, scientists discover scores of new fish species, like a new species of giant arapaima recently found in the rivers of Guyana. These discoveries are important in ways we might never have imagined.

Are there still new species of fish yet to be discovered? You might think the answer to that is no. But researchers scrutinizing unexplored waters are discovering hundreds of previously unknown species every year. Recent findings have ranged from the weird to the beautiful, from tiny to gargantuan in size and from deep-sea dwellers to jungle air-breathers.

Consider, for example, Lasiognathus regan, a previously unknown anglerfish found deep in the Gulf of Mexico. One writer described the 1- to 4-inch long creature as looking like “a hunchbacked, rotting old shoe with spikes, a scraggly mustache and a big mouth with bad teeth.” Growing from the fish’s head is a “fishing pole” with a bioluminescent lure. Bacteria cause the lure to glow in the perpetual darkness of the deep, attracting other fish that the weird angler eats.

The hideous-looking anglerfish contrasts greatly with the colorful dwarf snakehead (Channa andrao) researchers found near West Bengal, India. This long, slender fish exudes beauty, with glowing electric-blue fins and body markings. But what make the fish extra special are its abilities to breathe air and “walk” across land. Should the shallow waters it lives in dry up, it can wriggle over wet ground to another home site, surviving up to four days out of water.

The coastal waters of western Australia were the site of another new discovery in 2015 — the ruby seadragon, an unusual fish related to seahorses. A few specimens dating as far back as 1919 had been preserved in museum collections, but it wasn’t until a sharp-eyed researcher noticed differences in this unusual fish and its two known living relatives that DNA tests were run, determining that the ruby seadragon is an entirely new species. Using information about the original collection sites, biologists employed a remote-controlled submersible to find and film living rubies, which are so named because of their brilliant crimson coloration.

It’s easy to understand why an inches-long fish living deep in the ocean escapes notice for so long, but could a 10-foot, 400-pound air-breather also be among the new fish discoveries? It seems so. Scientists testing the DNA of giant arapaimas, fish that breathe air through a primitive lung, have found genetically distinct populations in Guyana’s rivers. These fish closely resemble one another, but analysis of their genetic coding reveals at least one new species — perhaps several — swimming in South America’s jungle waters.

Scientists have said there are many species of fish yet to be discovered, but the knowledge base is expanding faster than ever before. The United Nations Educational, Scientific and Cultural Organization reports that 1,565 new fish species came to light between 1999 and 2008, and scores more have been added to the list since then. In saltwater alone, roughly 150 new species are described each year. Add in freshwater discoveries, and the tally climbs into the hundreds.

Why is this important? Are there legitimate reasons why so much time, effort and money is spent on finding fish we didn’t know about?

Meg Lowman with the California Academy of Sciences summed up the answer nicely in an interview with San Francisco Chronicle reporter Kevin Schultz.

Every time we make a new species discovery, it may be a key to a future medicine, the glue that holds together an ecosystem or an important new predator,” Lowman said. “Half of the time, we don’t know these things, but that’s the purpose: to be this incredible Noah’s Ark of biodiversity for the researchers of tomorrow.”

Such concepts are not just the wishful thinking of scientists trying to justify their work. Their practical application is seen in many facets of fish study ongoing in different disciplines.

For example, toadfish, a group of seemingly unimportant creatures found in oceans worldwide, are proving important in medical research. Male toadfish can contract their swim bladders extremely fast in order to create sounds that attract mates. Researchers believe that studying these muscles may help them fight cardiomyopathy, a condition where the heart cannot pump blood properly because of its inability to relax normally.

Another unique toadfish adaptation scientists find interesting is their ability to regenerate the central nervous system. When cut, the spinal cord of the toadfish will regenerate completely, unlike humans’. Scientists believe this could lead to advances in prosthetic devices for people with central nerve damage.

Pufferfish have also been shown to provide important medical benefits. These fish secrete a deadly neurotoxin in some of their internal organs and on their skin. Researchers are developing new medications from that toxin that may help improve the lives of cancer patients suffering debilitating pain caused by chemotherapy treatments.

Could the discovery of new species of fish lead to more such breakthroughs? No one knows for sure, but it’s highly likely and one reason continued new species research is important.

Discovering new species also helps us sustainably manage fish populations that could be vulnerable to overharvest or other threats. Take the bonnethead, a small species of hammerhead shark. For decades, scientists believed there was just a single species of bonnethead that was abundant and widespread. Therefore, there were few regulations governing the harvest of this species, which is heavily targeted by commercial and recreational fishermen. However, when scientists recently sequenced the DNA of what they believed to be bonnethead sharks in Belize, they were shocked to find that they are likely an entirely different species based on large genetic differences between them and other bonnetheads in the region. The discovery that there might actually be two species with smaller ranges and overall numbers means scientists must reassess each of their vulnerabilities.

“Now we have to define the range of each of these species individually and assess them independently against where the potential threats are,” said Demian Chapman, the lead researcher of the team making the discovery. “For example, there are published reports that bonnetheads have nearly been wiped out by unregulated fishing in Brazil. We do not know which species this is, and our finding of a new species in Belize highlights that there could be more undescribed ones out there, each one facing a unique set of threats.”

Such discoveries are now more important than ever because species are dying off worldwide at alarming rates from habitat loss, pollution, climate change and other often man-made influences. The die-offs are happening faster than researchers can identify the species. Giving a species a name is the first step toward protecting it from extinction, as once it is identified, efforts to monitor and conserve the species can be put in place.

To create a better world for humans and other animal inhabitants of our planet, we certainly need to know as much as possible about all of the world’s creatures, including fish. Once we can understand what makes them tick, we can grasp how we can help them and how they can help us.

Yet even if new species don’t always have immediate benefits that make our lives better, we should strive to know and understand every living creature with which we share our world. In some ways, many new discoveries are like great works of art. They don’t have much practical purpose at all, but sometimes it’s just enough for fish to amaze and impress us the same way those artworks do. Discovering new species never before seen by any human eyes certainly serves that purpose.