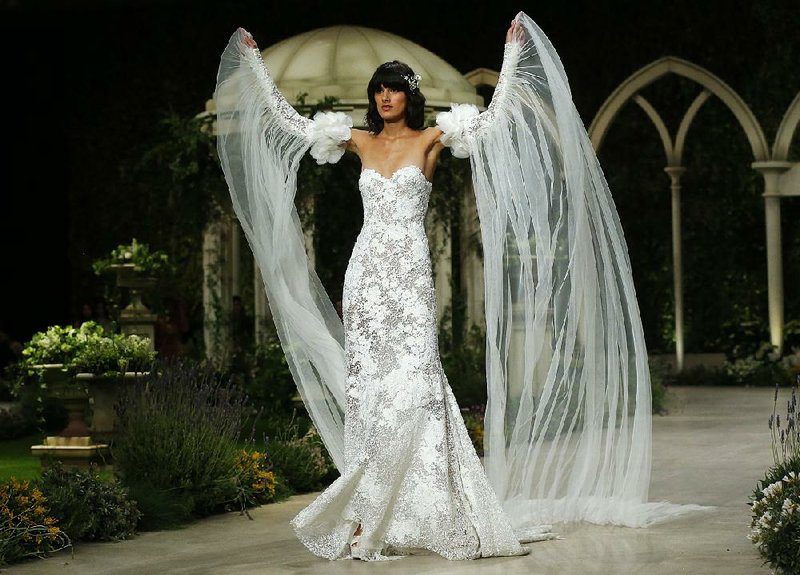 A model wears a creation from Pronovias in this file photo taken during the 2018 Barcelona Bridal fashion week in Barcelona, Spain. From dumping the bouquet and garter tosses to statement hats instead of veils, today’s brides and grooms are going their own way.

NEW YORK -- When Ashley Yore and Derek Ultican were planning their wedding, the question of the garter and bouquet tosses didn't come up.

"It just wasn't something I ever wanted to do," said the 33-year-old Yore, who lives in Tampa, Fla. "Maybe because a lot of our friends are married already. We're just not a super-traditional couple. We wanted everyone to be part of the party and enjoy themselves."

They're not alone. According to The Knot's 2018 Real Wedding Study, many couples are going their own way when it comes to longstanding traditions. They're incorporating more personal touches, paying closer attention to their carbon footprints, and embracing fashion trends that have trickled from the runways to wedding halls.

"I do think there's an element of women feeling empowered and saying, you know what, this bouquet toss for whoever's going to get married next is a little cliche, or the garter feels a little unnecessary," said Lauren Kay, deputy editor of The Knot. "Couples are just more focused on the guest experience."

Yore and Ultican, who is also 33, married oceanside March 2 in St. Pete Beach, Fla., with a reception at the pink, castle-like Don CeSar hotel. Their chuppah, the traditional Jewish canopy used during marriage ceremonies, was made of bamboo trees that were planted in their backyard a few days later.

"This really important piece of our wedding can now flourish in our home," Yore said. "That was really special."

Her mother made their party favors, little mason jars filled with mixed nuts flavored with cinnamon sugar. Each one had a photo label of the couple with the message: "We're nuts about you." They were special not only because they came from mom, but because Ultican loves the snack.

Such functional favors are hot on the handmade site Etsy. This year, couples are sending guests away with gifts they actually might want, rather than generic items of yore. According to Etsy, searches so far this year for such things as "wine favors," "soap favors" and "honey favors" were on the rise.

The 35-year-old Ivory Davis (formerly Weems) married 34-year-old information technology specialist Jonathan Davis in Cancun, Mexico, on Oct. 20. They combined their escort cards with their party favors -- shot glasses emblazoned with "We Came. We Conquered. We Cancuned," and "Viva Las Davis," which was the hashtag they encouraged guests to use when posting on Instagram and other social media during their celebration.

The best part: The shot glasses were filled with a tequila from Cancun and served throughout the reception at the tequila bar they set up.

"We wanted (guests) to take a shot to start the celebration of our union," said Ivory Davis, a flight attendant based in Los Angeles.

Etsy trend expert Dayna Isom Johnson noted a rise in sustainable wedding touches, with searches on the site for eco-friendly bridal items numbering more than 107,000 in the past four months alone, including for reusable straws, biodegradable confetti and vintage decor.

Bethany Pickard owns a boutique wedding and event planning company, Modern Kicks, in New York's Hudson Valley. She has seen a rise in couples looking to serve locally sourced food and cut down on paper products.

"They're doing chalkboard menus instead of one on paper for every guest," Pickard said. "And they're choosing vendors that can repurpose dishes and plates and things rather than trucking that stuff across the state."

A Brooklyn catering company, Purslane, guarantees carbon neutrality through reusable and compostable wares, the purchase of carbon credits and consumables sourced from nearby sustainable vendors.

"We do not send anything to landfills," said a partner, Amanda Braddock.

Johnson said alternatives to veils are increasing, from huge show-stopping hats and tulle turbans to smaller accessories, such as ornate hair clips.

"I'm talking about statement hats to a simple velvet bow that they're tying in their hair," she said. "They don't want that traditional, cathedral-length veil."

Wedding dresses with sleeves have been making a comeback for several years, but Johnson said it's all about statement sleeves these days. It's a way to bring a bit more glamour, romance and drama to a couple's big Instagram-worthy moment, she said.

"It's the '70s bell sleeve, the split sleeve and over-the-top lace. There are sleeves that are chiffony and whimsical," Johnson said.

Capes and capelets have also taken off, she said.

Many couples are also looking to honor each other in private ways, perhaps following the cues of Meghan Markle and, later, her pal Priyanka Chopra when Chopra wed Nick Jonas.

Markle revealed in September that her May wedding dress included a small piece of a blue dress she wore on her first date with Prince Harry. When Chopra married Jonas in December, donning two wedding dresses for separate ceremonies, she included a secret of her own: a piece of the dress Jonas' mother, Denise, wore at her own wedding sewn into one of Chopra's gowns. The gown was embroidered with messages, including Chopra and Jonas' wedding date (Dec. 1), her parents' first names (Madhu and Ashok) and her hubby's full name: Nicholas Jerry Jonas.

The custom Purple Label black tuxedo Jonas wore also had a secret message inside the lapel: a small piece of lace from one of Chopra's looks, embroidered with the Urdu "My Jaan," for shared life.

Johnson said brides can keep little secrets simpler through a tie bar, for example, with words of love on the back, or a private sentiment sewn into a seam of a dress.

"Today's weddings," she said, "are about letting the couple tell their personalized and unique love stories."