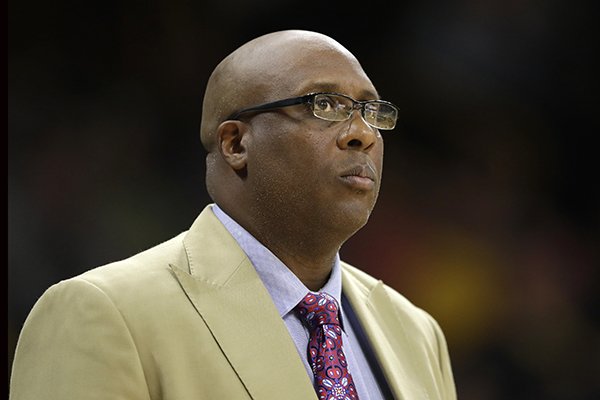 Stetson head coach Corey Williams watches from the bench during the first half of an NCAA college basketball game against Iowa, Monday, Dec. 5, 2016, in Iowa City, Iowa. (AP Photo/Charlie Neibergall)

FAYETTEVILLE — Arkansas coach Eric Musselman has made the first addition to his coaching staff.

Corey Williams, formerly a head coach at Stetson and a member of the 1993 NBA champion Chicago Bulls, has been hired as an assistant coach with the Razorbacks.

“I am looking forward to working with Coach Musselman,” Williams said in a release. “He is an unbelievable coach. He has a passion for Arkansas and is passionate about student-athlete success. This is a great time to be a part of Razorback basketball and I can’t wait to get started.”

Prior to his tenure with the Hatters, Williams served as a student assistant at Oklahoma State from 1993-94, was an assistant coach at Oral Roberts from 2000-2007 and a Florida State assistant coach from 2007-13 under Leonard Hamilton.

Williams, a native of Macon, Ga., played point guard at Oklahoma State from 1988-92. By the end of his college career, he ranked eighth on the school’s career scoring list with 1,320 points and led the Cowboys to back-to-back Sweet 16 appearances under coach Eddie Sutton in 1991 and 1992.

Following his one season with the Bulls, Williams spent the next year playing for the Minnesota Timberwolves and the Oklahoma City Cavalry of the CBA. He also played professionally in Taiwan from 1995-98 with the DaCin Tigers.

“We are excited and fortunate to have a coach of Corey’s caliber,” Musselman said in the release. “His experience as a head coach will be invaluable on our staff and he was widely respected as an assistant coach for building winning programs. Also, his knowledge gained playing at the highest level will benefit our players’ development. Corey will help Arkansas compete at a championship level.”

Williams is the first official hire to be made by Musselman since he was hired as the Razorbacks' head coach on April 7. Anthony Ruta, an assistant coach for Musselman at Nevada, has been working with Musselman in Fayetteville, but Ruta's job title is not known.