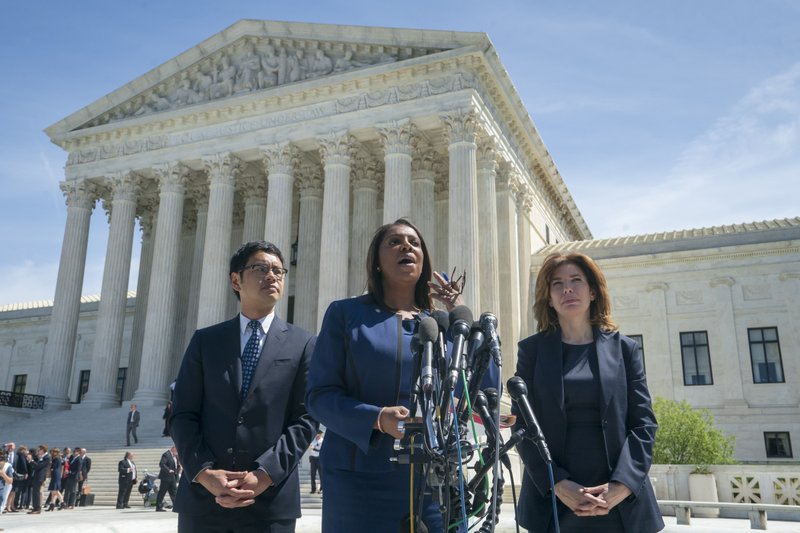 New York State Attorney General Letitia James, center, flanked by Dale Ho, left, an attorney for the American Civil Liberties Union, and New York City Census Director Julie Menin, speaks to reporters after the Supreme Court heard arguments over the Trump administration's plan to ask about citizenship on the 2020 census, in Washington, Tuesday, April 23, 2019. Critics say adding the question would discourage many immigrants from being counted, leading to an inaccurate count.

WASHINGTON -- The U.S. Supreme Court heard arguments Tuesday over the plan under President Donald Trump's administration to ask about citizenship on the 2020 census.

The case could affect how many seats states have in the House of Representatives and their share of federal dollars over the next 10 years. States with a large number of immigrants tend to vote Democratic.

Three lower courts have blocked the plan to ask every U.S. resident about citizenship in the census, finding that the question would discourage many immigrants from being counted. Two of the three judges also ruled that asking if people are citizens would violate the provision of the Constitution that calls for a count of the population, regardless of citizenship status, every 10 years. The last time the question was included on the census form sent to every American household was 1950.

Three conservative justices, Samuel Alito, Neil Gorsuch and Clarence Thomas, had expressed skepticism about the challenge to the question in earlier stages of the case, but Chief Justice John Roberts and Brett Kavanaugh had been silent.

However, over 80 minutes in a packed courtroom, neither Roberts nor Kavanaugh appeared to share the concern of the lower-court judges who ruled against the administration.

Kavanaugh, the court's newest member and a Trump appointee, suggested Congress could change the law if it was so concerned that the accuracy of the once-a-decade population count will suffer. "Why doesn't Congress prohibit the asking of the citizenship question?" Kavanaugh asked near the end of the morning session.

Lower courts found that Ross' explanation was a pretext for adding the question, noting that he had consulted early in his tenure with Steve Bannon, Trump's former top political adviser, and Kris Kobach, the former Kansas secretary of state.

The liberal justices peppered Francisco with questions about the administration plan.

"This is a solution in search of a problem," Justice Sonia Sotomayor said of Ross' decision.

Justice Elena Kagan said that "you can't read this record without sensing that this need was a contrived one."

Roberts offered a different perspective on the information the citizenship question would produce.

Census Bureau experts have concluded that the census would produce a more accurate picture of the U.S. population without a citizenship question because people might be reluctant to say if they or others in their households are not citizens. Federal law requires people to complete the census accurately and fully.

The Supreme Court is hearing the case on a tight time frame, even though no federal appeals court has weighed in yet. A decision is expected by late June, in time to print census forms for the April 2020 population count.

The administration argues that the commerce secretary has wide discretion in designing the census questionnaire and that courts should not be second-guessing his action. States, cities and rights groups that sued over the issue don't even have the right to go to federal court, the administration says.

Gorsuch, a Trump appointee, noted that many other countries include citizenship questions on their censuses.

Douglas Letter, a lawyer representing the House of Representatives, said the census is critically important to the House, which apportions its seats among the states based on the results. "Anything that undermines the accuracy of the actual enumeration is immediately a problem," Letter said, quoting from the provision of the Constitution that mandates a decennial census.

Information for this article was contributed by Jessica Gresko and Darlene Superville of The Associated Press.