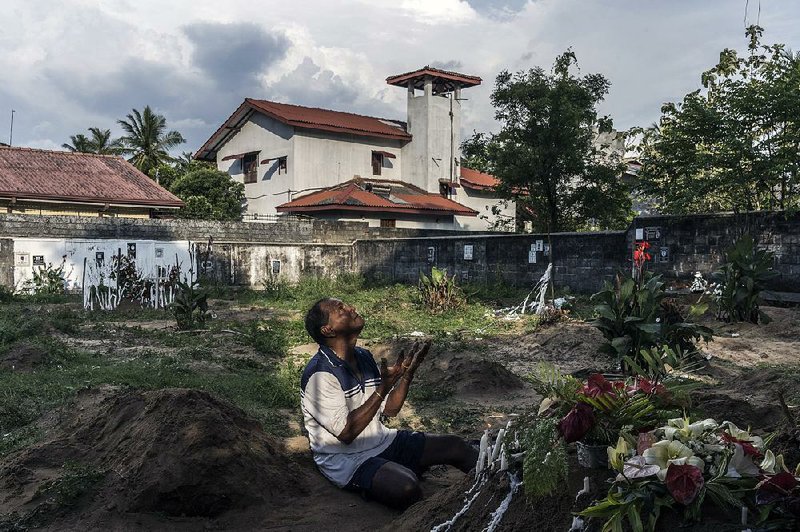 Mourner Melton Roy prays Tuesday among the graves for some of Sunday’s bombing victims during burials at Sellakanda Catholic Cemetery in Negombo, Sri Lanka.

The Islamic State claimed responsibility Tuesday for the Easter Sunday bombings at churches and hotels in Sri Lanka, as the government there raised the number of people killed to 359. The militant group's Amaq news agency called the bombers "Islamic State fighters."

A top government official said the suicide bombings at the churches, hotels and other sites were carried out by Islamic fundamentalists in apparent retaliation for the New Zealand mosque massacres last month that a white supremacist has been charged with carrying out.

The Islamic State's statement, which was disseminated on the group's chat rooms on the app Telegram, said the bombings had been intended to target Christians as well as citizens of countries belonging to the coalition fighting the Islamic State.

In a later statement, the group identified the seven suicide bombers by their assumed names and specified which of them had gone to which target on what it called "the infidel holiday."

Sri Lankan authorities have blamed the attacks on National Thowheeth Jama'ath, a little-known Islamic extremist group in the island nation. Its leader, alternately known as Mohammed Zahran or Zahran Hashmi, became known to Muslim leaders three years ago for his incendiary speeches online.

Later Tuesday, Amaq published a video showing eight men -- apparently the attackers -- pledging allegiance to Abu Bakr al-Baghdadi, the leader of the Islamic State, whom they called "emir of the believers." They held their hands up, index fingers pointed skyward, in a gesture that the Islamic State has adopted to refer to belief in one God.

The news agency also released an image purported to show the leader of the attackers, standing amid seven others whose faces are covered. The group did not provide any other evidence for its claim, and the identities of those depicted in the image were not independently verified.

If true, the claim of Islamic State responsibility demonstrates that the group still poses a threat, despite the loss of the territory it once held in Syria and Iraq.

"There seems to have been foreign involvement" in the bombings, Wickremesinghe said at a news conference. Investigators believe that some of the attackers "have traveled abroad and have come back."

Some of the attackers, including one or two of the suicide bombers, had been in Syria, Wickremesinghe said. But he stopped short of saying they had fought for the Islamic State, and he said their time in Syria was not necessarily tied to the bombing plot.

"We can't tell you immediately, definitively, to whom they had links," he said. But from the start, "there was suspicion that there were links with ISIS," he said, using an acronym for the Islamic State.

And now, he said, "some of the evidence points to that."

The prime minister said several countries were aiding in the investigation, and the United States ambassador to Sri Lanka, Alaina Teplitz, said that the FBI had joined it.

U.S. intelligence agencies have been tracking Islamic State recruitment efforts and how they might encompass Sri Lanka, current and former officials said. Of particular concern are the Sri Lankan men who left their country to fight with the Islamic State in Iraq and Syria, where they may have been exposed to the group's methods for making bombs and coordinating attacks.

A Sri Lankan official, who spoke on the condition of anonymity because he was not authorized to speak publicly, said that as early as 2017, the United States had warned Sri Lankan officials that the Islamic State was recruiting across Southeast Asia and that Sri Lanka could become a "hub" for the group's activities.

There was no indication that the United States had any warning about the Easter attacks, multiple U.S. officials said, also speaking on the condition of anonymity to discuss an ongoing investigation. Had the United States obtained information about an imminent strike, it would have been immediately shared with the Sri Lankans, current and former officials said.

Sri Lankan officials raised the possibility Tuesday that the bombers were hoping to avenge the killings of 50 Muslims in a shooting spree at two mosques in Christchurch, New Zealand, in March.

"The preliminary investigations have revealed that what happened in Sri Lanka was in retaliation for the attack against Muslims in Christchurch," a junior defense minister, Ruwan Wijewardene, told parliament.

Later Tuesday, Wickremesinghe put it more cautiously, saying that investigators were looking into a possible connection.

"It's possible it could have been because of the Christchurch attacks," he said. "We cannot say here."

Neither official said what had led investigators to think that the bombings might have been retribution for the New Zealand attacks.

The office of New Zealand Prime Minister Jacinda Ardern issued a statement responding to the Christchurch claim that described Sri Lanka's investigation as "in its early stages."

"New Zealand has not yet seen any intelligence upon which such an assessment might be based," it said.

The government said Monday that it had arrested 40 people in connection with the attacks, all of them Sri Lankans.

As for identifying and capturing all of the people involved, Wickremesinghe said, "We are making progress; that's all I could tell you."

Meanwhile, government officials scrambled to determine how they had failed to detect cooperation between National Thowheeth Jama'ath and outsiders.

In his first national address since the attacks, President Maithripala Sirisena announced major changes to the country's security apparatus.

"I must be truthful and admit that there were lapses on the part of defense officials," Sirisena said.

He said police and security forces "would be restructured within a week" and that he expected to change the heads of all the security forces. The president acknowledged that the government had information about the local terrorist group since 2017 but said there was insufficient evidence to take legal action against its members.

India provided the Sri Lankans with specific warnings about threats, even naming the group and its ringleader, in the days before the attack, Sri Lankan officials said.

Mahinda Rajapaksa, an opposition leader and Sri Lanka's former strongman president, ascribed the security failure to rivalries between the president and the prime minister.

"Don't take this as a joke," he said. "As long as the division between the president and the prime minister exists, you can't solve this problem. My security division knew about the advance notice [of the attack]; I did not."

As Sri Lanka's leaders wrangled over the apparent intelligence failure, security was out in force for a national day of mourning Tuesday.

In the city of Negombo, Cardinal Malcolm Ranjith, the archbishop of Colombo, held a funeral service in the courtyard of St. Sebastian Church, where more than 100 people were killed in one of the bombings. Hundreds of military and police personnel attended the service, and nuns, priests and community members were frisked as they arrived.

Because of the toll, the service lasted several hours, with caskets brought in three and four at a time, accompanied by sobbing relatives. The coffins were then taken to a mass burial site and covered by three earth movers. 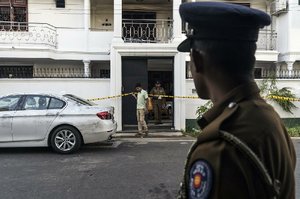 Photo by The New York Times/ADAM DEAN
Police work at a safe house Tuesday in Colombo, Sri Lanka, where suspects in Sunday’s bombing attacks were arrested in a raid. The government said Monday that it had arrested 40 people in the attacks, all of them Sri Lankans. 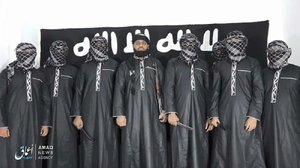 Photo by AP/Amaq news agency
An image posted Tuesday by the Islamic State group’s news agency purports to show the men believed to have carried out bombings in Sri Lanka and their leader, who stands with his face uncovered. 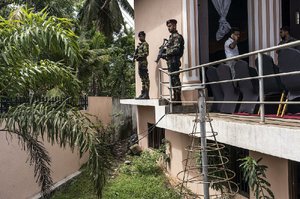 Photo by The New York Times/ADAM DEAN
Security forces stand guard Tuesday during funerals at St. Sebastian Church in Negombo, Sri Lanka, where 110 people were killed in one of the bombings Sunday. The service took several hours as caskets were taken into the church three and four at a time.