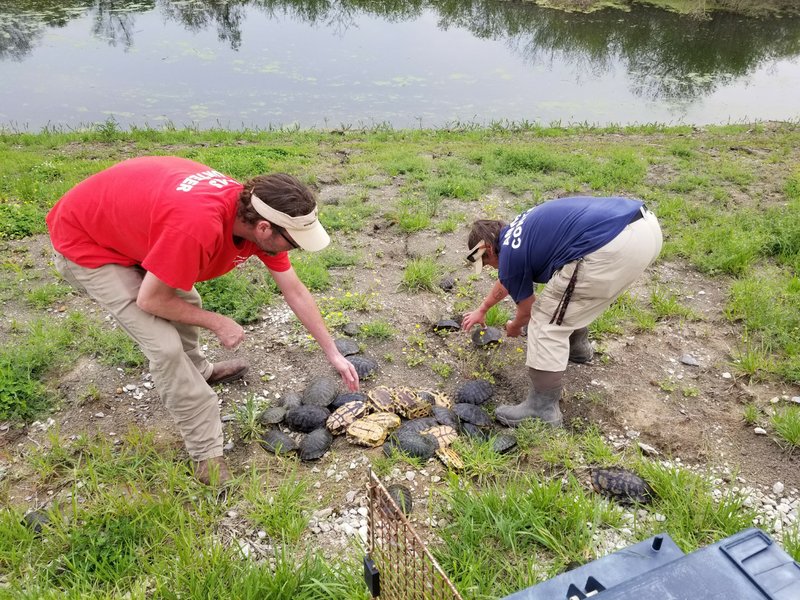 Dozens of turtles were rescued by animal control officials from a wastewater treatment filter over the course of two days recently in West Memphis, officials said.

However, plant employees said it was a "small incident" compared with numbers they've seen in the past.

The West Memphis Animal Shelter was notified by the neighboring wastewater treatment plant of the trapped turtles last Wednesday, said Wesley Burt, an animal control officer. By the end of Thursday, rescuers had pulled about 75 of the reptiles from the filter.

Turtles are common in the treatment plant's retention pond, said Paul Holloway, superintendent of wastewater for the city. The turtles find the pond a good place to live and breed, he said.

But during heavy rains, the sewage ponds are pumped to prevent overflowing, according to Burt. The pumped water flows into a concrete container about 20 feet deep before continuing on to the Mississippi River. That is where the turtles became trapped, Burt said.

Animal shelter rescuers assembled long extension poles with netting at the ends, scooped up the reptiles and took them to safety, officials said. The turtles were initially placed in kiddie pools, then taken to the banks of the Mississippi River and released.

"It was good to save the turtles," Burt said. "We couldn't just see them drown."

Most of the reptiles were box turtles, though one was a snapping turtle, he said.

Burt said this was the first time in the roughly four years that he's worked at the shelter that the shelter was notified of turtles trapped in the filter. But Holloway said trapped turtles "happens all the time."

"This happened many, many times before," he said. "Every time we bypass, this happens."

Holloway said that whenever workers find turtles in the container, they release them into the river. He said he's seen up to 400 turtles at a time during his approximately 12 years at the facility.

"This is nothing new," he said.

Efforts are being made to prevent turtles from becoming trapped in the future.

Burt said animal shelter personnel are now checking for turtles daily at the pond area. Also, the water department intends to inform the animal shelter whenever it expects to activate the plant's pumps.