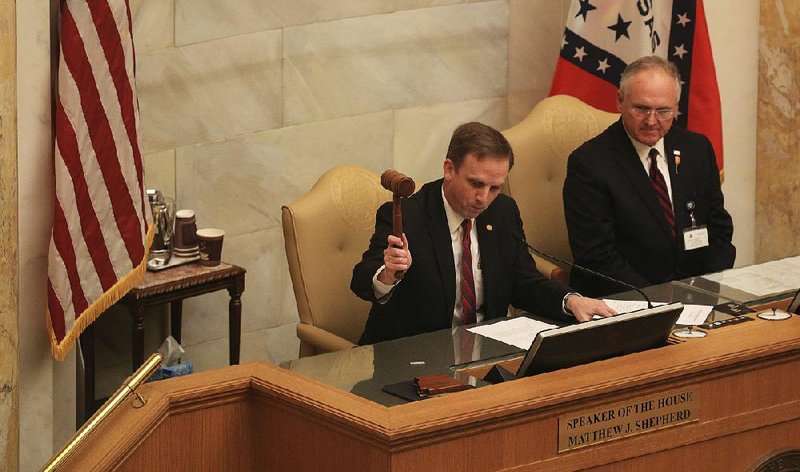 House Speaker Matthew Shepherd gavels the 92nd General Assembly to a close Wednesday after thanking lawmakers, constituents and others and praising colleagues for their work. “History will judge what we’ve done here,” Shepherd said. At right is House Parliamentarian Buddy Johnson. More photos are available at arkansasonline.com/425genassembly/

Just before adjourning this year's regular legislative session, the Arkansas Senate on Wednesday sent the governor a bill that would allow the Little Rock Board of Directors to propose changing the city's form of government.

The Senate voted 31-1 to approve SB179 after concurring with a House-approved amendment to the bill in a voice vote.

On the other side of the state Capitol, House Speaker Matthew Shepherd, R-El Dorado, wound down the session by thanking family, friends, lawmakers, constituents and House staff members, and commending representatives for working hard and efficiently for the 88 days that the 92nd General Assembly met.

He said Washington, D.C., could learn from the way members from across the state worked together during the 2019 session.

"I think that what we've seen is that we ran a very efficient session. We kept some of the drama to a minimum, and I'm very proud of the fact of how we worked and the fact we gave our best efforts," he said. "I realized at the end of a session that probably for each of us there's probably a few bills that we wished would've passed. There's probably a few bills that each of us wished had not passed. But at the end of the day, we came together to represent the people of Arkansas, and we did so with professionalism and civility."

On Wednesday, the final day of this year's session, Johnson surprised some colleagues by asking the Senate to suspend the rules to allow consideration of SB179. Johnson said the House passed an amended version of his bill after the Senate recessed April 10.

SB179 -- which does not name any specific city -- would allow the board of directors in cities with the city manager form of government to propose changing to the mayor-council form. The proposal would be an ordinance presented to the mayor that would set a special election.

Besides Little Rock, other cities with the city manager form of government are Arkadelphia, Hot Springs, Hope and Texarkana, said Lanny Richmond, an attorney with the Arkansas Municipal League.

Current state law requires petitions to be presented to the mayor to change the form of government from city manager to mayor-council. Before a special election can be called, the petitions must have valid signatures of voters equal to at least 15 percent of the ballots cast for mayor in the most recent general election with that race.

Sen. Linda Chesterfield, D-Little Rock, told senators that it would be unusual for the Senate to allow for the consideration of this bill on the final day of the session, but she and Johnson support the bill.

"It would be helpful to us for once in your life to do something a little different for me," Chesterfield said.

Johnson told senators that Little Rock Mayor Frank Scott asked for the bill to be amended by Rep. Fred Love, D-Little Rock, in the House to require the Little Rock board, rather than the Pulaski County Board of Election Commissioners, to redraw the boundaries of the wards.

Johnson said in an interview that he came up with the bill on his own, after there was discussion in the Little Rock mayor's race last year about changing the form of government. He said his intent is to simplify the process for changing the form of government. He said he favors eliminating the three at-large representatives on Little Rock's 10-member board of directors, which includes seven directors who represent wards.

Asked about the Little Rock mayor's position on the bill, Scott spokesman Stephanie Jackson said Scott isn't making any public statements about the legislation. She added that neither Scott nor anyone in his administration asked for the bill to be filed.

She confirmed that Scott asked Johnson to have the bill amended so the Little Rock Board of Directors, rather than the Board of Election Commissioners, would redraw the ward boundaries.

Asked whether Hutchinson, a Republican, plans to sign the bill, his spokesman J.R. Davis said Wednesday afternoon in an email to this newspaper that "he hasn't had a chance to review it yet" and "will study it more tonight."

The bill also addresses how terms would be handled of existing officials if a change is approved by voters.

Under SB179, at the time the mayor-city council reorganization would be effective, the mayor would continue to serve in office until his term expires. The same would apply to members of the City Council. The terms of existing officials would be handled the same when switching to the city manager form from city administrator.

The bill was approved by a Republican-majority Legislature.

House Democratic leader Rep. Charles Blake of Little Rock reviewed the session at a state Democratic Party news conference shortly after the Legislature adjourned Wednesday. He noted that the Democratic caucus -- being a super-minority party -- is often judged for fighting majority legislation instead of proposing its own. He said he was particularly proud that several Republican-sponsored bills aiming to roll back aspects of the state's new citizen-initiated minimum wage law failed.

He added that Democrats started conversations about important issues even though some pieces of legislation related to those issues didn't become law.

"I hope over the 90 days of the 92nd General Assembly we provided a clear alternative to what could be accomplishing in this state if we had more like-minded people serving," Blake said.

Shepherd implored lawmakers to continue to work efficiently as they travel to the state Capitol for committee meetings in between legislative sessions. As he gaveled the House out for the final time, several members shouted in celebration and stood in applause. 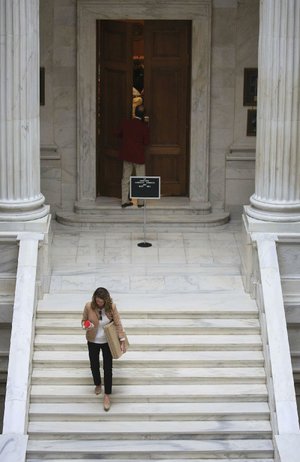 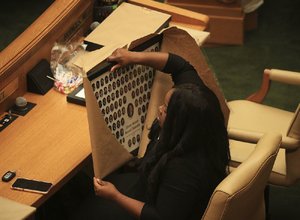 Photo by Staton Breidenthal
Rep. Jamie Scott, D-North Little Rock, looks at a framed photo collection of House members Wednesday as she waits for the House to meet to close out the 92nd General Assembly. 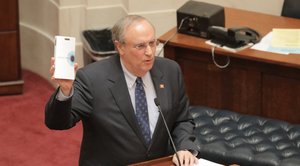