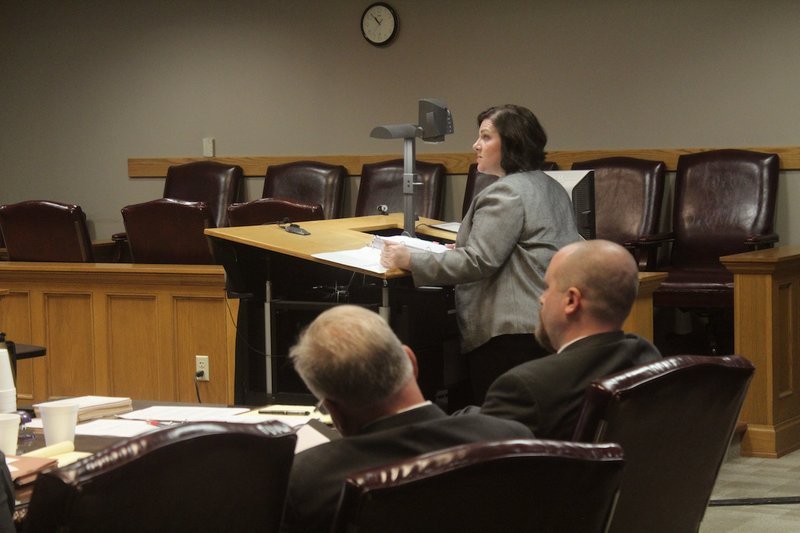 Assistant Attorney General Jennifer Merritt is shown at a court hearing in this file photo.

An Oklahoma pharmacologist testified Wednesday that midazolam, the first of three drugs administered under Arkansas' lethal injection protocol, is incapable of sedating anyone deeply enough to ward off "horrific" pain from the second and third injections.

Dr. Craig W. Stevens, a professor of pharmacology at Oklahoma State University in Tulsa, testified on the second day of a federal trial over the constitutionality of the three-drug protocol, which attorneys for 18 death-row inmates say subjects them to cruel and unusual punishment.

He is the second medical expert to testify on the plaintiffs' behalf, coming after Tuesday's testimony from a forensic pathologist who said his autopsy of one of four inmates put to death under the protocol in April 2017 indicated the man remained conscious after the injection of the sedative, allowing him to feel the second injection, vecuronium bromide, a muscular paralytic that can cause a feeling of suffocation.

U.S. District Judge Kristine Baker has also heard testimony from eight people -- lawyers and journalists -- who have witnessed midazolam executions in Arkansas and other states. They have described the condemned inmates lurching, curling their fingers, raising their arms, moving their heads, making fish-like mouth movements and emitting sounds after the injection of midazolam, which some said they believed were indications that the dying men were experiencing pain or struggling to breathe. All have acknowledged, however, that the jerking movements could be involuntary responses to the dying process and aren't necessarily consciously experienced.

Additional medical witnesses, for both the plaintiffs and the state, are expected over the next week and a half.

Stevens first testified before Baker in a preliminary injunction hearing in 2017, when the state had scheduled the deaths of eight inmates over 11 days, before a previous batch of midazolam expired. Half of the executions ended up being carried out, while courts halted the others.

No executions are currently scheduled, as the state doesn't have any execution drugs available.

"They have distinct methods of action. Very different," he said of the two types of drugs. He said he doesn't believe that midazolam produces anesthesia, an unconscious state that makes a person unaware of and unable to feel pain.

Stevens also testified that midazolam is widely known by pharmacologists to have a "ceiling effect," a point at which a stronger dose has no effect.

He used a chart to show levels of sedation, from basic sedation to a state of sleep known as "hypnosis," to anesthesia, to coma and finally, death. He said benzodiazepines can't take someone up to and beyond anesthesia, pointing to several scientific studies. With them, he said, "you can never get to an anesthetic state."

Taking a diazepine drug as an anaesthetic "is like taking an anti-diabetic drug to treat someone for asthma," he testified.

One study Stevens cited was conducted by David Greenblatt, whom he called "the world authority on benzodiazepines." It showed that of 18 patients who overdosed on benzodiazepines -- before midazolam existed -- none suffered central nervous system problems and none died.

The studies, Stevens said, "show us that they're very benign drugs, even at massive doses."

He said that the second drug in Arkansas' lethal injection protocol, vecuronium bromide, has no effect on the brain and no sedative effect, working only to prevent muscle movement. In a study published in the British Journal of Anesthesia, he said, some patients who had been given the drug to undergo an operation emerged from surgery "still being paralyzed, without anesthesia," and some later said they felt like they were being "buried alive."

He said the injection of third drug, potassium chloride, would cause "great pain," as known from studies in which people were inadvertently injected with it.

Overall, asked about the effect on inmates who are subjected to Arkansas' protocol, Stevens said, "I am certain there will be pain and suffering, masked by the paralytic, as a result of the second and third drugs."

He acknowledged, under cross-examination by Senior Assistant Attorney General Jennifer Merritt, that he is an "academic" who has never personally conducted studies on human beings using midazolam. He also acknowledged that a book he co-wrote with George Brenner called Pharmacology, first published in 2013, states that the main purpose of midazolam is anesthesia.

"It's not an anesthetic at all," he told Merritt, saying those words were written by Brenner, who died earlier this year, and that the latest edition of the book specifies that midazolam isn't to be used as an anesthetic.

Merritt also showed him midazolam labels required by the U.S. Food and Drug Administration that state midazolam can be used "for the induction of general anesthesia before administration of other anesthetics," and, depending how it is administered, it can cause respiratory depression, agitation and involuntary movements.

"We're not trying to use it as a lethal drug," she told him.

"I'm not sure why you're using it, quite frankly," he replied.