A Face in the Crowd,

This classic drama from 1957, available on a special-edition Blu-ray with 4K digital transfer from Criterion Collection, features Andy Griffith in his memorable film debut as Lonesome Rhodes, a philosophy-spouting country and western singer who -- after being discovered in a county jail by a TV talent coordinator (Patricia Neal) -- becomes an instant media darling and political demagogue. With Walter Matthau, Anthony Franciosa, Lee Remick, Kay Medford, Rip Torn.

The release includes an interview with Ron Briley, author of The Ambivalent Legacy of Elia Kazan, an interview with Andy Griffith biographer Evan Dalton Smith, the 2005 documentary Facing the Past; the film's trailer; an essay by critic April Wolfe, and a 1957 New York Times Magazine profile of Andy Griffith.

Destroyer (R, 2 hours, 1 minute) Nicole Kidman takes on a challenging, macabre, genre-defying role as LAPD detective Erin Bell, who started her career undercover with a gang in the California desert. That didn't go well. When the gang leader resurfaces many years later, she is focused on evening the score with him and the remaining gang members. Unlike many of the actress' previous roles, there's no glamour here; this suspense drama is difficult to watch. With Sebastian Stan, Toby Kebbell, Bradley Whitford; directed by Karyn Kusama.

Escape Room (PG-13, 1 hour, 39 minutes) A psychological thriller with a fairly decent amount of suspense, violence and terror in which six strangers, stuck in a situation beyond their control, must use their wits to survive. WIth Taylor Russell, Logan Miller, Jay Ellis; directed by Adam Robitel.

Strange Nature (not rated, 1 hour, 40 minutes) Comeuppance for mistakes of the past are revealed in this none-too-frightening environmental horror mystery in which a children's hiking group in rural Minnesota discovers several live mutated frogs along a pond, followed by creepy discoveries such as a disemboweled deer and the birth of deformed puppies. Are a hermit father and his daughter to blame? Or tainted water sources? With John Hennigan, Stephen Tobolowsky, Lisa Sheridan, Tiffany Shepis; directed by James Ojala.

Alien 4K (R, 1 hour, 57 minutes) In celebration of the 40th anniversary of the release of this nightmare-inducing and franchise-spawning space thriller from Ridley Scott ("In space no one can hear you scream"), this UHD Blu-ray release includes a theatrical version and director's cut, plus extras such as deleted scenes. With Sigourney Weaver, Tom Skerritt, Harry Dean Stanton, Veronica Cartwright, John Hurt, Ian Holm, Yaphet Kotto and a truly terrifying extraterrestrial creature with bad intent. The film won an Academy Award for best visual effects. 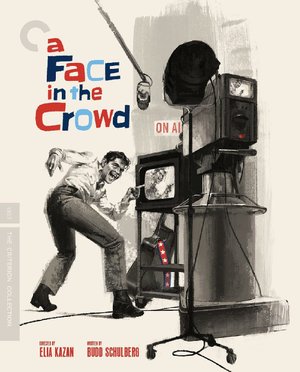 A Face In The Crowd