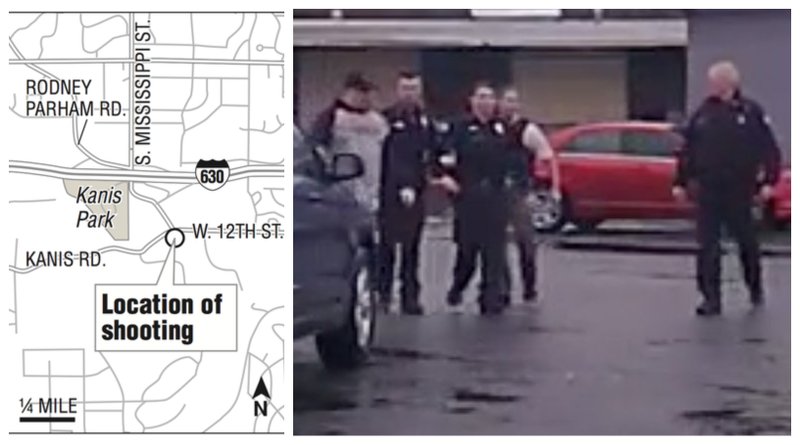 Left: A map showing the location of the shooting. Right: An image from a Little Rock police dashboard video camera shows officer Charles Starks being escorted from the scene of the Feb. 22 shooting that left Bradley Blackshire dead.

Methamphetamine, PCP, marijuana and cocaine were found in the body of a Little Rock man killed in a late February officer-involved shooting, according to an investigative file released Thursday.

The Little Rock Police Department released its 546-page investigative report into the death of 30-year-old Bradley Blackshire, who was shot by officer Charles Starks. Starks was investigating a stolen vehicle that Blackshire was driving.

The report shows that Blackshire -- who was shot eight times, according to the medical examiner's report -- had been acting in a paranoid manner in the days leading up the shooting. One witness told investigators that Blackshire believed police were following him.

Starks, who fired several shots into Blackshire's vehicle when it began to move toward him, said in an interview that he "blacked out" and does not remember details of the shooting. In other instances in the file, Starks recalls in detail his actions, his fear, and the scene as it played out around him.

The heavily redacted investigative file did not include the autopsy report and listed the release of the items -- among others -- as pending. Little Rock City Attorney Tom Carpenter said Thursday that the autopsy record is not subject to release based on Arkansas law.

Dispatchers sent officers to the scene, and Starks was the first to arrive.

Video of the incident showed Starks confronting Blackshire, ordering him multiple times to get out of the car. After Blackshire refused to comply, the car rolled forward, striking Starks. Starks fired at least 15 times, killing Blackshire.

Six days after Prosecuting Attorney Larry Jegley released a letter stating that Starks would not face criminal charges in Blackshire's death, the Police Department released the investigative file that had been turned over to Jegley's office.

According to the case file, investigators found a stolen .45-caliber handgun in the Nissan Altima that Blackshire was driving. Both the gun and the car were reported stolen on the same day -- Jan. 4 -- though the car had been missing from Bryant since at least Dec. 10, according to the file. The gun was stolen from a vehicle near 315 Rock St., according to a police report.

In the Altima, police also found multiple scales, a black mask, gloves, binoculars, an assortment of pills and nearly 18 grams of a "white substance," according to the file.

In a red bag in the vehicle, officers found the scales; a plastic bag containing the white substance, which Jegley said later was methamphetamine; assorted pills and Blackshire's state-issued identification, according to an evidence log.

Blackshire's former girlfriend, Desaray Clarke, 21, was a passenger in the Altima when the shooting occurred. In an interview with investigators, Clarke said Blackshire had been acting strangely.

Clarke said she wasn't familiar with the car Blackshire was driving when he picked her up that morning, but she did recognize the gun tucked under the passenger seat, according to her statement. Blackshire carried guns, she told investigators.

While she rode with Blackshire to a barbershop at South Rodney Parham Road and West 12th Street, he pointed out a car that didn't have any stickers on the license plate. He told her it was a police officer.

She said Blackshire had recently been paranoid, insisting that "the Feds" were following him around because of the charges he was facing. He'd told her he could face 30 years in prison and was worried about an upcoming court date on a charge of trafficking methamphetamine.

Clarke told Blackshire that he must be "high on that [expletive]" and "tripping," according to the file. She said she thought Blackshire and another man had smoked meth earlier, but she wasn't there at the time.

Toxicology reports listed at least four illegal drugs in Blackshire's system at the time of the shooting.

As the Altima turned into the barbershop parking lot, Clarke saw a police car with its blinker on behind them. Blackshire backed into a parking spot, and the officer pulled up in front of the Altima and turned on his lights, she said.

When asked why he decided to approach Blackshire's vehicle alone instead of waiting for backup, Starks said he thought that he could end the matter quickly.

"[A]s I come around the corner, it automatically dawns on me that if I just pull my car in front of him, this is over with," Starks told interviewers later. "There's nothing else that can take place from this because there's not gonna be a pursuit if, if, if I'm able to block his car in. I get him in custody. ... It's done."

Clarke said Starks immediately exited the police vehicle with his gun drawn, shouting commands as he moved to the driver's window. She said as soon as the officer gave commands she put her hands up.

"I could see her hands," Starks told investigators. "I could see what I would describe as sheer terror in her face. Um, and, and I could tell at that point she was not a threat."

"He had what I would call a ... a completely blank thousand-yard stare at me," Starks said. "Um, other subjects that I have placed at gunpoint for stolen cars and other things I can't ever recall seeing that look being given directly to me back."

Video footage from the shooting shows Starks ordering Blackshire more than 10 times to exit the vehicle, but Blackshire did not comply.

Starks said he decided to position his body square with the driver's door to reduce the force if the door opened onto him. Squaring his body in that manner, he said, also gave him better protection from his bullet-resistant vest.

"I know what he's not doing," Starks said later when asked what Blackshire was doing in the car. "He's not doing what I'm telling him to do and that's show me his hands in a clear definitive way so I know you are absolutely just as the passenger, you are absolutely no threat to me. And then all I'm, I'm gonna do is have you get out of the vehicle so I can place you in handcuffs and this is over."

Starks said later that Blackshire's noncompliance is "not unusual."

"I'm performing a felony takedown on somebody," he said. "It's not all that unusual for, for a brief moment them not to register what's going on and not, you know, not do what I'm telling them to. But normally there's a pretty quick transition to OK."

For a few seconds, however, Starks and Blackshire spoke through the open car window.

Starks told investigators he heard Blackshire say: "You're just gonna have to shoot me."

Clarke said that while Starks was giving Blackshire commands, Blackshire had one hand on the steering wheel and was reaching in his jacket pocket with his other hand. She described his hand in the pocket as a "digging motion" like he was looking for something.

Clarke told investigators that she believed Blackshire was looking for a revolver he carries to shoot the officer. Clarke said Blackshire had once told her that he had shot at an officer a couple of years ago.

Starks said he never saw a weapon, but he suspected Blackshire had one and began slowly backing away from the vehicle.

"And as I'm backing away I realized the tires are turned my direction," Starks said.

When the vehicle hit him, it wasn't violently accelerating, Starks said, but it did strike him.

"I don't recall at what point of that thought I started firing. I know the [entire] time as I was backing away I had him at gunpoint," Starks said in his interview. "Knowing that I'd, I didn't wanna die. I didn't want my child to grow up not knowing her dad at all. I began firing. I'm sorry."

Starks told investigators that he could not remember everything about the shooting. "I remember backing, continue to back away and the car is coming forward and then there's a large portion that I don't recall after that," he said. "There, there's, there's a, there's a, a, a space of time I don't know if I blacked out or if I'm just having problems remembering it or what happened."

Video of the shooting showed that in between bursts of gunfire, Starks moved from the side of the vehicle to the front of it, where the car that was rolling forward struck him and he fell onto the hood as he continued to shoot.

His decision to step in front of the car has drawn scrutiny in recent months. Starks said in his interview that he was trying to get behind the engine block of the car, where officers are trained to take refuge. He also said that if he was going to shoot, he wanted to shoot in the direction of the empty building wall behind Blackshire's vehicle, not toward 12th Street.

There were at least 14 apparent bullet marks in the vehicle, the report said.

As the vehicle rolled toward Starks, officer Michael Simpson approached the scene in his patrol car. Simpson said in a later interview that he had heard about the stolen vehicle and headed in that direction moments before he heard Starks yelling on the radio.

As he approached the parking lot, Simpson said he saw Starks in front of the Altima. Starks had his hand out, but Simpson couldn't hear what he was saying.

Simpson said he saw the car start to move forward slowly and said the front end of the car lifted up as it moved forward at a fast pace toward Starks. Other witness accounts also said the car was moving slowly.

"I saw it was going to run him over," Simpson told investigators.

For several seconds, Simpson said he ordered Blackshire to get out of the car. By the time officers pulled him out through the back passenger side of the car -- the driver's side door was blocked by another car in the parking lot -- Blackshire was barely breathing, officers reported.

There was a three-minute gap between the shooting and Blackshire receiving medical treatment, the report said.

At least three officers applied tourniquets and bandages to Blackshire's wounds, according to the report. MEMS first responders pronounced Blackshire dead shortly after.

Starks was immediately placed on administrative leave and was relieved of duty three days after the shooting. Starks is still being paid by the city.

In his April 19 announcement that criminal charges would not be filed against Starks, Jegley said the vehicle was a deadly weapon and Starks was justly in fear of his life when he shot Blackshire.

Little Rock police spokesman Eric Barnes said the internal investigation into whether Starks violated any department policy had been turned over to Police Chief Keith Humphrey for review. 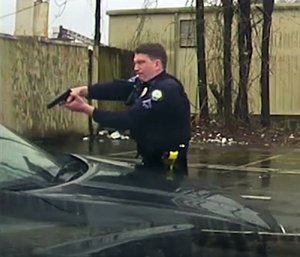 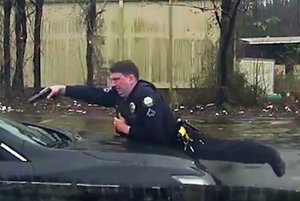