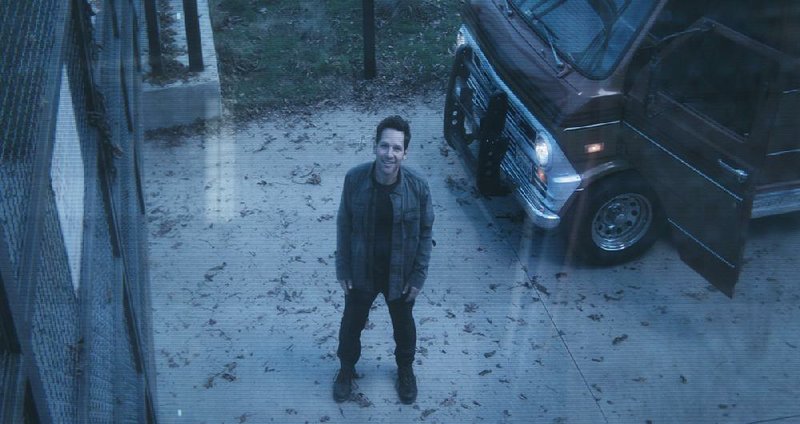 Scott Lang, aka Ant-Man (Paul Rudd) has somehow escaped the Quantum Realm by the time the action starts in Avengers: Endgame.

LOS ANGELES -- Over the course of 10 years, Marvel has built a reputation for delivering two inevitabilities: meaty post-credits scenes and spoiler-free press runs.

Case in point: At the hush-hush Avengers: Endgame news conference in downtown Los Angeles, Paul Rudd and Jeremy Renner (who play Ant-Man and Hawkeye, respectively) managed to talk about the Marvel Cinematic Universe while revealing absolutely nothing about the forthcoming superhero team-up.

"You don't want to ruin it because people spoil stuff, man," said Renner, who skillfully dodged every question that even alluded to the top-secret film. "It's terrible."

He was right to be cautious. Just over a week before Endgame was slated to hit theaters worldwide, five minutes of credible footage from the film was leaked online.

According to descriptions, the footage includes scenes from throughout the movie that reveal key details about the plot. Disney has not confirmed whether the footage is indeed from the film.

On Tuesday, the Russo brothers, who have directed four MCU titles including Infinity War and Endgame, issued a statement via Twitter urging "the greatest fans in the world" not to ruin the movie for other fans.

"Please know that the two of us, along with everyone involved in Endgame, have worked tirelessly for the last three years with the sole intention of delivering a surprising and emotional powerful conclusion to the Infinity saga," read the statement. "When you see Endgame in the coming weeks, please don't spoil it for others, the same way you wouldn't want it spoiled for you."

"It's a bummer that we are in this place where there are people who really want to find things out and then advertise that to get clicks and sell advertising dollars or whatever it is," said Rudd before the leak. "I always think it's fun to see a movie and not know anything about it."

"It's a better moviegoing experience not to know anything," Renner agreed.

Keeping fans (and journalists) in the dark is so emblematic of Marvel that it was surprising to find even the slightest hint about the film hidden in the form of Hawkeye's Endgame costume, which was displayed among a decade's worth of movie posters from 22 MCU films and mannequins sporting the Avengers' uniforms.

Not far from Ant-Man's familiar red, white and black suit was Renner's costume, which looked more befitting of a ninja, complete with a katana and a hood rather than the usual archer's bow and arrow.

The refreshed look, plus the few glimpses of the character in the movie's trailer, hint that Hawkeye will assume the mantle of Ronin, a persona multiple characters have adopted over the years in the comics. (The word Ronin means "lone samurai" in Japanese.)

"I'm not cleared to say anything," said Renner when asked about Ronin.

The finished product is so top secret that Disney even took the unusual step of not screening the film in advance of its press day, instead showing only a meager amount of footage -- something that was also done for Infinity War and a handful of Star Wars titles but is typically unthinkable in the world of studio press junkets.

That left the stars free to riff on things such as the costume display.

"My favorite one was Bruce Banner's," said Rudd of the character's dark blazer and jean-clad mannequin, which was positioned between Captain America's rogue soldier uniform and Okoye's Dora Milaje armor. "Because it was a dude standing like a mannequin at Macy's among all these super suits."

"So was [Tony] Stark's," said Renner with a laugh. "It was like fancy sweats and a shirt."

"Like at Barneys," Rudd said. The two burst into laughter.

Both Hawkeye and Ant-Man were notably missing -- briefly referenced as being under house arrest -- from the action of Infinity War, which saw Thanos decimate half the population of the universe with a single snap of his fingers.

Among the victims were Black Panther, Spider-Man, Doctor Strange, Scarlet Witch and Guardians of the Galaxy members Star-Lord, Drax, Mantis and Groot. Only a few heroes -- including original Avengers Captain America, Black Widow, Thor, Hulk and Iron Man -- survived to "avenge the fallen."

A post-credits scene in Infinity War teased the introduction of Brie Larson as Captain Marvel, whose solo feature arrived in theaters a month before Endgame and quickly grossed more than $1 billion worldwide. Her addition to the MCU marks an epic conclusion for the current phase of Marvel films, which collectively have minted more than $18.5 billion since Iron Man opened in 2008.

When the Russo brothers told Renner that his character, also one of the original Avengers, would be sidelined, "I was like, 'Great, I don't have to do press,'" he said with a laugh.

"That is the silver lining, isn't it?" Rudd said.

Infinity War was thus the first Avengers title without Hawkeye. He had even shared the screen with Ant-Man in the pseudo-Avengers installment Captain America: Civil War. The Russo brothers insisted that both characters were intentionally left out of Infinity War for plot purposes.

"Everything's always about storytelling," said Joe Russo, who added that it wasn't a matter of struggling to fit the characters into the already bloated cast.

Rudd was informed about the Infinity War details while shooting Ant-Man and the Wasp, released a little more than two months later with a post-credits scene that revealed Ant-Man's whereabouts during the snap.

Rudd says he was "excited" about the post-credits scene's Infinity War tie-in but wasn't especially upset about being left out of the superhero blockbuster either.

"I don't think in terms of 'Oh, I want to be in this,'" he said. "I'm more interested in making an interesting, unique story and seeing how it weaves in with the others. I was happy that we got to address it in the way that we did."

Hawkeye has been criticized for not being strong enough to compete with the rest of the Avengers. After all, there's only so much a skilled archer can do to assist a Norse god or a super soldier.

"To each their own, I suppose," said Renner of the criticism. "Tenacity is a superpower."

Besides Black Widow, Hawkeye is obviously the least physically strong Avenger. Despite this, Marvel revealed plans for Widow to receive her own solo movie after serving in a supporting role in six films.

Hawkeye reportedly will headline a limited series for the forthcoming Disney+ streaming service, but like much of the MCU plans following Endgame, that has not been confirmed by Marvel. And Renner, who has two Oscar nominations under his belt, said he'd be open to the idea of headlining his own film.

In the meantime, Renner is focusing on making music "because that keeps me home with my daughter," he said.

And though it seems inevitable there will be more Ant-Man adventures in his future, Rudd can only confirm he's set to star in a limited Netflix series called Living With Yourself that streams in the fall. But even with that, he'd rather play it safe. "I don't know if they have the Marvel policy; I don't know what I'm allowed to say."

As for the future of Marvel, what comes next is anyone's guess.

"I don't look back at the past, and I certainly don't have a crystal ball to look into the future," Renner said. "I always try to be present. I'm really stoked about where we're at with Endgame and really, really excited to see it. It's going to be a big, big event for us personally and for the fans. What happens after that is up to the Marvel gods."

But both actors are open to another 10 years in the MCU, "if they'll have me," Renner said.

"It's been incredible so far, and I certainly have no qualms with keeping them going," Rudd said. "I don't know if I'd fit in the suit in 10 years."

Renner laughed. "That's what I said when I signed on 10 years ago."