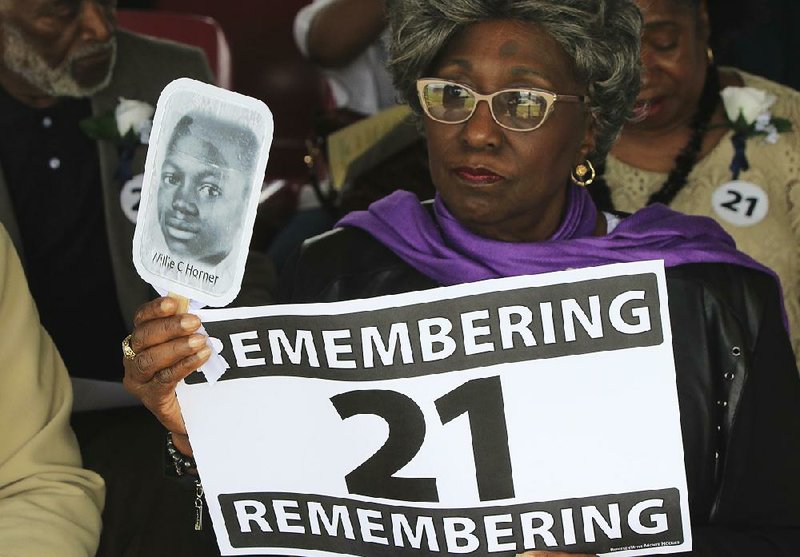 Malvestin Locke holds a photo of her brother, Willie C. Horner, during a dedication ceremony Thursday for a memorial to the Wrightsville 21. Horner was one of 21 boys who burned to death in 1959 at a state-run facility in Wrightsville for troubled black teenagers. More photos available at arkansasonline.com/426wrightsville21/

Arkansas prison officials unveiled a monument at the Wrightsville unit Thursday commemorating the lives of 21 teenage boys who died in a fire near the lockup in 1959, at what was then called the Arkansas Negro Boys Industrial School.

A small stone marker now at the lockup, and surrounded by a circular slab and landscaped plants, is capped with a metal plate engraved with the names of the boys who died in the fire.

Fourteen of the boys, whose bodies were unidentified, are buried at the Heaven of Rest Cemetery in Little Rock, where a marker was added last year to note the presence of their mass grave.

Arkansas Department of Correction spokesman Solomon Graved called it "a tragedy that, if we're honest with ourselves, should have never happened."

The tragedy at the so-called reform school came on the heels of the integration battles at Little Rock Central High School two years earlier.

Grif Stockley, a historian who wrote a book about the fire, delivered a keynote address at the memorial's dedication Thursday, noting that the "school" more closely resembled a prison farm, complete with whippings and poor hygiene.

Malvestin Locke, the older sister of fire victim Willie Horner, recalled seeing Gov. Orval Faubus on the front page of the newspaper holding a news conference after the fire. Faubus placed blame on the black superintendent of the school, according to Stockley.

"It made me feel angry, sad, because he wanted to have some type of payback for integration," Locke said of seeing Faubus' photo in the paper.

But, according to the Encyclopedia of Arkansas History & Culture, the school's board of directors concluded that the superintendent had acted properly. In the end, a Pulaski County grand jury investigated the fire and concluded that the blame for the conditions leading to the tragedy could be shared by many: school officials, the governor's administration, the Legislature, and Arkansans, for not demanding better.

A total of 69 boys had been locked inside their dormitory for the night March 5, 1959, when the building caught fire. There were no adults on duty and there was no means of escape, other than to claw their way out of the windows covered by screens. In that way, 48 children were able to make it out of the building alive.

That same night, according to the Encyclopedia of Arkansas History & Culture, a juvenile-offender institution for white boys near Pine Bluff had two adults on duty, and the doors were not locked at night.

"This is kind of like a closure to a funeral that should have happened 60 years ago," said Maedean Horner, another of Willie Horner's sisters.

Horner said she remembers her parents leaving their North Little Rock home at dawn the morning of the fire, after being told of an incident at the institution where their 16-year-old son was housed. Throughout the day, she said, officials would call out the names of the dead as they were discovered. When her brother's name was called, she said, her mother fainted into her father's arms.

The family later moved to Seattle. Horner and her sister, Locke, both in their 70s, were two of more than a dozen family members of the victims to attend the memorial ribbon-cutting Thursday.

In addition to memorializing her brother, Maedean Horner said she believed the state could do more to heal the "open wounds" of 1959.

She suggested opening technical schools for "troubled youths," recalling that her brother liked to assemble scooters from spare parts.

"Education is the only way they're going to solve these issues, these problems," she said. 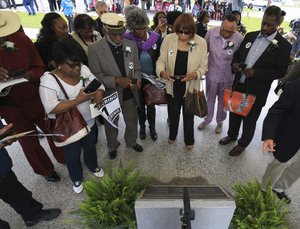 Photo by Staton Breidenthal
Family members take photos of the memorial to the Wrightsville 21 on Thursday after a dedication ceremony at the Arkansas Department of Correction’s Wrightsville Unit. More photos available at arkansasonline.com/426wrightsville21/