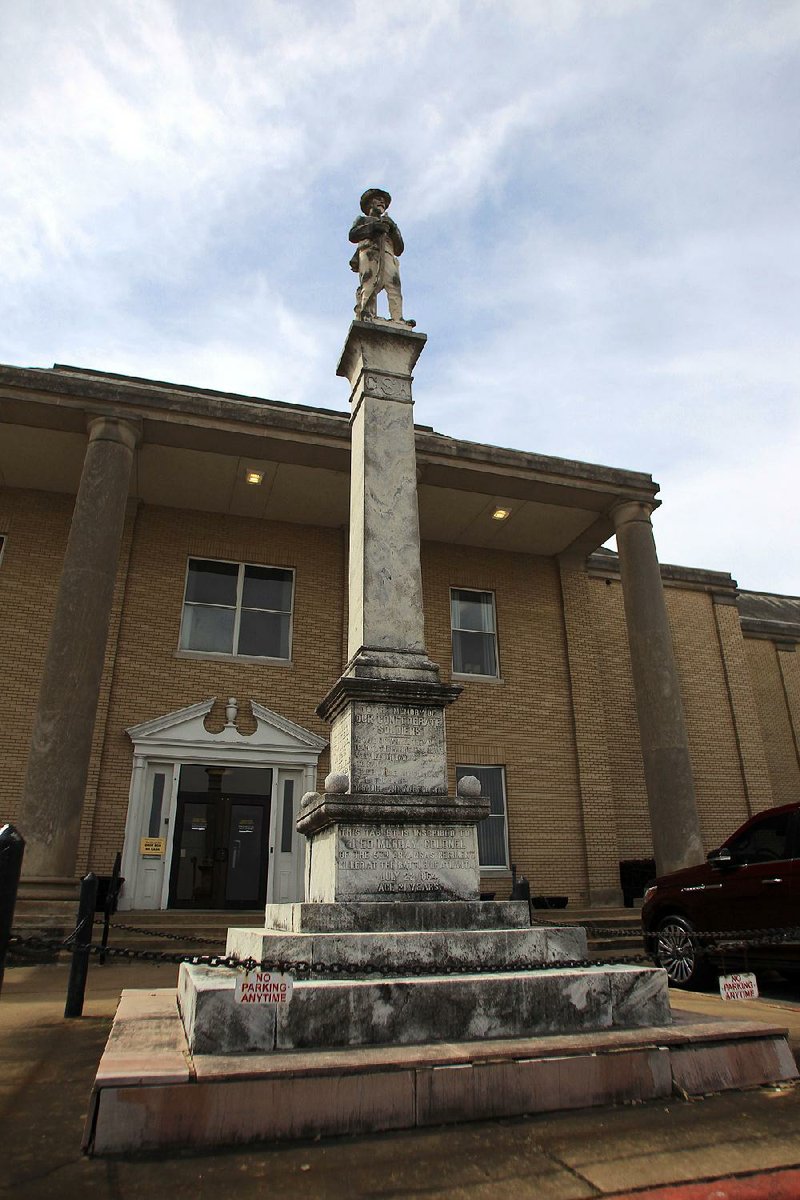 Gerald Robinson, county judge of Jefferson County, says a deal has been struck to move a Confederate statue that stands on courthouse grounds to a Confederate cemetery in Pine Bluff. ( Dale Ellis)

PINE BLUFF -- A deal has been struck to relocate a Confederate monument from the Jefferson County Courthouse grounds to a Confederate cemetery in the city.

Gerald Robinson, county judge of Jefferson County, said an agreement has been reached with the local chapter of the United Daughters of the Confederacy to move the monument to Camp White Sulphur Springs Confederate Cemetery on Luckwood Road in Pine Bluff.

The monument has been on the courthouse grounds since the 1970s.

DeeLois Lawrence, a member of the David O. Dodd Chapter of the United Daughters of the Confederacy, confirmed that the group has been in contact with Robinson regarding relocation of the statue. The organization commissioned the statue in 1907 and still owns it. It also owns the Confederate cemetery.

"When the article came out in the [Arkansas Democrat-Gazette] that Sunday, we called him the next morning," Lawrence said.

The 20-foot statue depicts a Confederate infantryman at the top of the monument's base. It was erected in 1910 and originally placed on the grounds of Pine Bluff High School, according to the Encyclopedia of Arkansas History and Culture. In 1974, the monument was moved to the north side of the Jefferson County Courthouse. It was listed on the National Register of Historic Places in 1996.

Robinson told the Arkansas Democrat-Gazette earlier this month that he was considering removing the statue because he believed it was an inappropriate symbol.

Confederate symbolism has come under scrutiny nationwide in the wake of the 2015 massacre of nine black churchgoers at Emanuel African Methodist Episcopal Church in Charleston, S.C. The mass shooting sparked a nationwide movement to remove Confederate monuments, flags and other symbols from public spaces and to rename schools, parks, roads and other public works that pay homage to the Confederacy.

Some 114 Confederate symbols have been removed across the country since the Charleston killings, according to a report by the Southern Poverty Law Center. More than 1,700 such symbols remain, the report said.

The Jefferson County monument's relocation is estimated to cost between $10,000 to $12,000, according to the county judge.

Former County Judge Henry "Hank" Wilkins IV said Friday that he also had worked with the local chapter of the United Daughters of the Confederacy to get the statue moved before his resignation in March 2018, after a federal prosecutor revealed Wilkins had admitted to taking bribes while he was a state legislator.

Wilkins said he had secured funding for the project and had talked to a company in Little Rock that specializes in moving large monuments. He said the estimate he was given to relocate the statue was $30,000, nearly triple the amount Robinson gave. Wilkins said he was told that was due to the complexity involved in moving the statue.

"They explained that in order to not damage it, they would have to take it apart in pieces," Wilkins said Friday. "In fact, the way it was designed and put up, it actually is in pieces, so they would just use the original architecture to disassemble it, move it, and put it back together without damaging it."

"I'm tired of talking about that statue," Robinson said. "I've got budget stuff on my mind right now. That statue is the least of my priorities."

Lawrence said she was unaware there had been an earlier estimate that was higher than the amount Robinson has quoted.

"I've not heard that figure at all," she said. "When we were working with Judge Wilkins that figure was not mentioned."

Lawrence said her group had no objections to the statue being on county property, but said if it were a cause of controversy the chapter would prefer it be moved.

"We were raised in Pine Bluff," she said. "We love Pine Bluff, and we don't want any controversy. If the statue is going to cause controversy being at the courthouse, then we want it on our private property."

Lawrence said the chapter is working to raise money to help cover the relocation cost. Robinson would not say Friday if the county had raised any private funds toward that expense, or whether he would consider asking the Quorum Court for an appropriation if sufficient private funds could not be raised.

Wilkins said, if asked, he would put Robinson in contact with the donors he had secured pledges from before his resignation.

The county could cover a portion or even all of the cost of returning the statue if necessary, according to an Arkansas Association of Counties representative.

Mark Whitmore, the association's chief legal counsel, said there are many privately owned monuments and artifacts that are erected on public property, and that the cost of returning those objects to their owners would be considered a legitimate expenditure of county money.

"If someone loaned you a firetruck or some other piece of personal property, it stands to reason that the county could legitimately bear the expense of returning that property," Whitmore said.