Pentagon set to expand role of soldiers at border 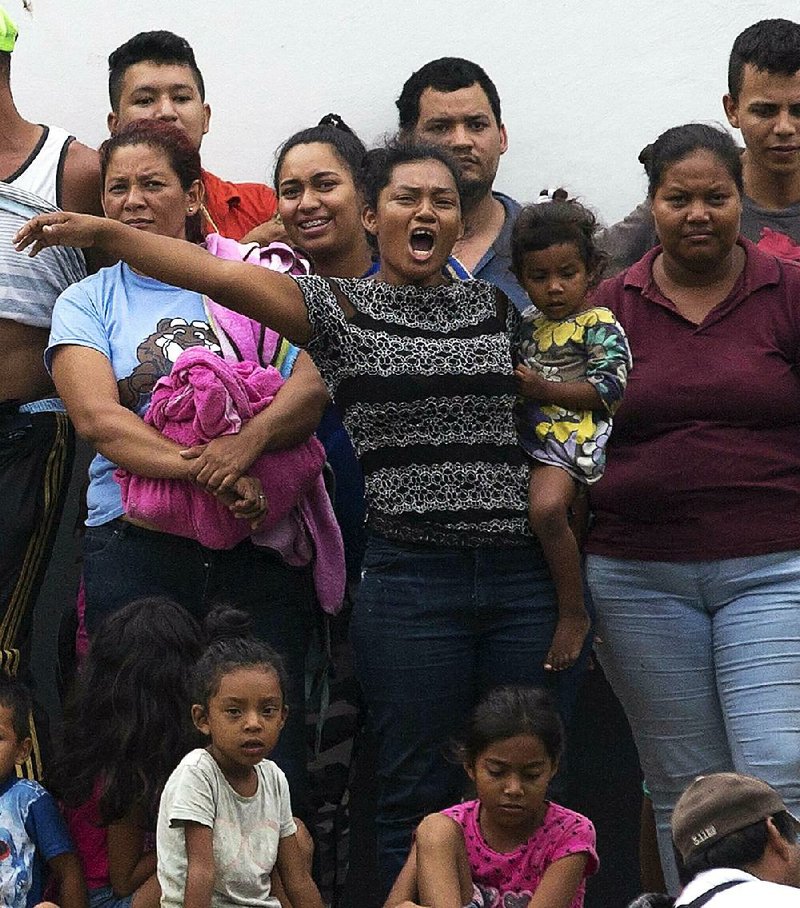 Migrants at a detention center in Tapachula in Mexico’s Chiapas state demonstrate Friday to demand better conditions or transfer to another facility. The surge of families arriving at the U.S. border is pushing plans for expanding the military’s role in dealing with the overwhelming numbers.

WASHINGTON -- The Pentagon is preparing to loosen rules that bar troops from interacting with migrants entering the United States, expanding the military's involvement in President Donald Trump's operation along the southern border.

Charles Summers, a spokesman for acting Defense Secretary Patrick Shanahan, said Shanahan was expected to approve the proposal, which was developed as a response to a call from the Department of Homeland Security for additional military assistance.

About 300 troops would be put in support roles such as driving buses with detainees and providing meals to them. The proposal includes adding Defense Department lawyers to help process the migrants.

There currently are about 2,900 active-duty troops operating in support of the Homeland Security forces at the border, plus about 2,000 National Guard troops. A key aspect of the policy governing military involvement at the border has been a prohibition on direct contact with migrants. This is meant to emphasize that the military is not in a law enforcement role.

Summers said the proposal being considered by Shanahan would include an "amendment" to the current policy on avoiding contact with migrants. This would be necessary in order to carry out tasks such as providing meals, legal assistance and transportation, he said.

"We have Border Patrol stations where [they] are literally overwhelmed with migrants, so we're merely delineating the fact that we will have some of our troops handing out meals and therefore would come in contact with migrants," Summers said.

According to internal Pentagon documents, the requested expansion of military activity along the border would cost an estimated $21.9 million through the end of fiscal 2019.

As part of the proposal, military attorneys would assist with deportation hearings in immigration courts across the country. The proposed move has already generated concern from military officers who worry it would drag their nonpartisan institution further into a divisive domestic political issue.

In a sign of the sensitivities surrounding a move that might be seen as putting troops in a law enforcement role, the documents note that military personnel would remain in a "segregated driver's compartment" when driving people to detention facilities. Customs and Border Protection officials would provide security on those trips.

The soldiers also would be asked to hand out snacks and refreshments to migrants in detention, where families often receive items like cookies, crackers and juice boxes between meals. Customs and Border Protection agents often complain such tasks amount to "baby-sitting" duties and say their time would be better spent guarding the border.

Troops would be accompanied by law enforcement personnel as they provide migrants food and periodically check on their welfare.

All of those activities, the documents note, require Shanahan to "grant a temporary exception to the 'no contact with migrants' policy." The documents also note that military personnel are barred from undertaking law enforcement activities in keeping with the Posse Comitatus Act.

The order drew concerns from policy experts who worry about the politicization of the military.

"To lean on the military to handle these functions that are not [military] in nature is essentially choosing to not invest in governance and relying on the military to make up the gap," said Alice Hunt Friend, a former Pentagon policy official and senior fellow at the Center for Strategic and International Studies. "We've seen that happen overseas for years and now we are seeing it at home and that's very concerning. This is mission creep for the U.S. military. A few hundred personnel doesn't break any dams, but it is a really worrying sign."

Friend also worried about the implications of the military being thrust into a battle between the White House and Congress. "I do worry there will be more conflation of the military with those kinds of politics even though the military isn't doing anything other than following lawful orders," she said.

The request comes as an unprecedented surge of Central American families arriving at the U.S. southern border pushes American agents to "the breaking point," according to Homeland Security officials. Last month, U.S. authorities processed more than 103,000 migrants, the highest one-month total in more than a decade.

Tyler Houlton, a Homeland Security spokesman, said the agency has been "transparent and vocal" about its need for help from the Department of Defense along the border.

"We appreciate DoD's long history of assistance on all our border security missions and its storied mission of providing humanitarian aid around the world," Houlton said Friday in a statement. "The current crisis requires DoD's assistance in both of those roles, which will be provided in a manner that fully complies with applicable law."

Border Patrol officials say overwhelmed agents are being pulled away from their law enforcement duties because they are so busy caring for migrant parents and children. The shortage of drivers and agents who can chaperone migrants to hospitals has been especially acute.

In the El Paso area, where the strain on Border Patrol resources has been greatest, groups of migrant families who cross the border to surrender to authorities sometimes wait for hours because there are no agents to pick them up with vans and buses.

Customs and Border Protection officers have been reassigned from ports of entry to drive vehicles and perform other support roles for border agents, but that has exacerbated wait times for commercial trucks and passenger vehicles crossing from Mexico.

Immigration law is one of the most complex and politically fraught areas of federal law, often compared to the tax code for its intricacy, which could complicate the potential assignment of military lawyers to migrants' cases.

According to Immigration Judge Dana Leigh Marks, having military lawyers with little or no experience in such cases could slow down the proceedings because judges will have to explain procedures to them.

"I've never heard of it in my 40 years," said Marks, a San Francisco judge who spoke in her capacity as past president of the National Association of Immigration Judges. "It's one more slug in the belly that takes your breath away."

Under the new proposal, military lawyers would be detailed to Immigration and Customs Enforcement and would be supervised by agency personnel as they work on immigration cases.

"Attorneys aren't interchangeable at the drop of a hat," said Ashley Tabbador, president of the union that represents federal immigration judges.

The judges' union has urged Congress for years to remove immigration courts from the Justice Department and create a more neutral system that is less subject to executive branch politics.

The proposal did not specify whether the military personnel conducting new border-related duties would be armed. Some troops along the border are armed, and some are not.

Information for this article was contributed by Greg Jaffe, Missy Ryan, Nick Miroff, Maria Sachetti and Paul Sonne of The Washington Post; and by Robert Burns of The Associated Press.