'Game of Thrones' begets bounty of merchandise for fans 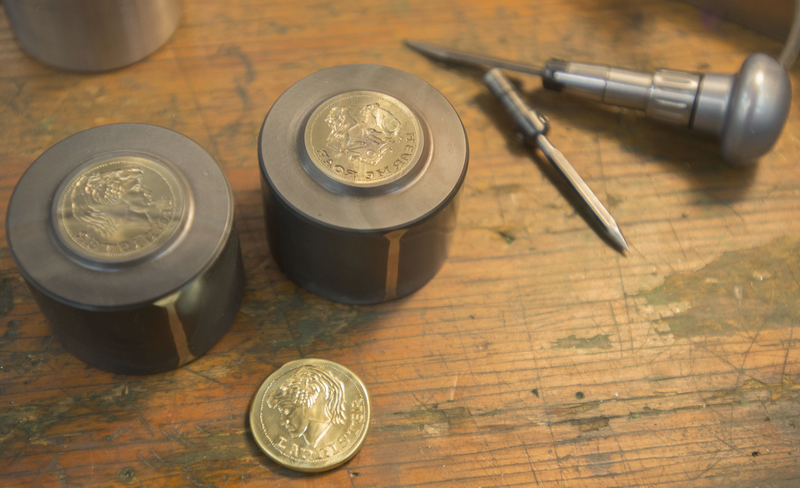 A freshly minted Lannister coin is shown next to it's die at the Shire Post Mint in Springdale. The company makes collectable coins based on several fantasy novels, including George R.R. Martin's "Game of Thrones." (NWA Democrat-Gazette/J.T. WAMPLER)

NEW YORK -- From wine and clothing to tours, HBO and retailers have cashed in through the years with Game of Thrones merchandise. Thrones is not only a huge international show but also a massive business, with all sides hoping to pad the bank during the show's eighth and final season.

"It's thousands of products, just a lot of stuff all around the world," said Jeff Peters, HBO's vice president of licensing and retail.

But while the show is a TV phenomenon, that doesn't guarantee fans will flock to stores.

"It's certainly good to be lucky. But you don't get to where the merchandising programs are with HBO and what they've done with Game of Thrones unless you have a true, point-by-point marketing and merchandising and retail strategy," said product and licensing expert Tony Lisanti.

"This is a global property and every country may resonate a little differently," he said.

California-based Vintage Wine Estates has been making the official Game of Thrones wine for three years now, said Pat Roney, the company's CEO. "Just the excitement all over the world with the calls that we get from almost 40 different countries to sell wine -- it's just amazing," he said.

Popular tours of Game of Thrones filming locations in Croatia and Ireland have boosted small, local economies there, according to TripAdvisor's Andrew Aley.

"Some really positive examples like Northern Ireland, for example, where it's not somewhere that's always been on every tourist's radar and it's now become one of the major pillars of tourism in that local economy," he said.

It wasn't always this easy for HBO to find retailing partners for Game of Thrones, Peters said.

"At the beginning, nobody really knew what it was," he said. "So, we were the ones making phone calls and we were saying, 'Hey, you got to get in on this. We think there's a great opportunity.' As the show got established and got big, then all the calls came to us and people were just throwing ideas and pitches."

Some of those ideas resulted in fashion collaborations with companies like Adidas, who created the now hard-to-find "Adidas x Game of Thrones Ultraboost" shoes, as well as a collection with men's fashion designer John Varv atos.

"The one thing that always stands out in my mind from the first season was all the textures, all the way the leathers are finished, the artisan fabrics, and it's a lot of what we do," said Varvatos. " ... So what you wanted to do is take that inspiration with a lot of the great details from the wardrobe from the show and put that into product that people actually could wear."

There are also Thrones-theme board games and Danielle Nicole's Game of Thrones handbags.

Aside from money, there have been other benefits to retailers joining forces with HBO. Take Urban Decay's new makeup collection, for example.

"A couple of these products didn't even exist in our line before. So the lipsticks were reimagined and have new casings and everything else," said Wende Zomnir, founding partner and chief creative officer of Urban Decay.

There has been a push to get new Thrones products out in time for the last season, but Lisanti thinks that even when the show ends, the products will stay in demand thanks to streaming and planned spinoffs.

"We're pretty confident that there will be interest in Game of Thrones for a long time," Peters said.