Restoring Notre Dame: How to do it without falsifying history 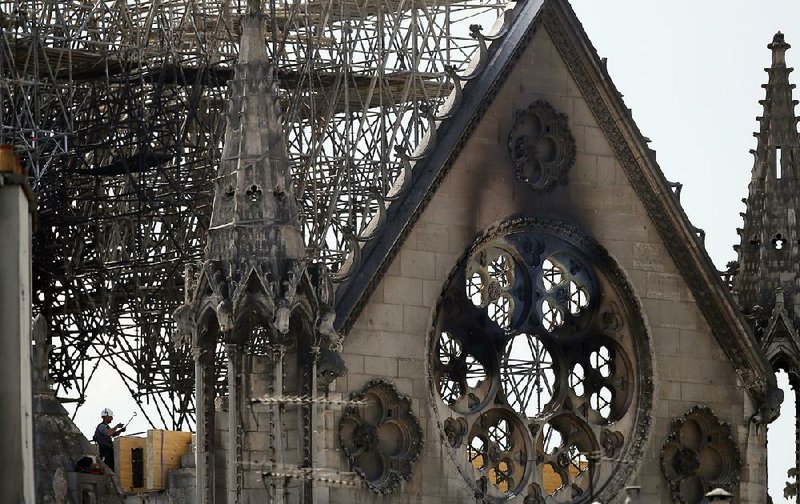 A worker checks on a wooden support structure placed on the Notre Dame Cathedral in Paris recently. Nearly $1 billion has already poured in from ordinary worshippers and high-powered magnates around the world to restore the cathedral after a massive fire.

After the devastating fire at Notre Dame Cathedral in Paris on April 15, French President Emmanuel Macron promised to rebuild the church, a promise followed by an outpouring of pledges of money from private individuals and companies, in France and elsewhere.

While long overdue and very welcome, it is also a reminder that it too often takes a catastrophic accident like this to elicit the funding to preserve artistic treasures like Notre Dame, a tendency that unfortunately makes such tragedies seem necessary to save historic monuments.

Equally troubling is Macron’s intimation that we can just “rebuild” the church. Such simplistic bravado speaks volumes about our own disposable culture, which apparently allows us to dispose of, recycle, replace or, indeed, clone anything. But what has burned at Notre Dame is now lost to history and cannot simply be recovered or replicated. Any attempt to restore the structure must acknowledge that.

So after the debris is cleared and the damage assessed, what is next? First, work must be done to arrest further degradation.

The building was already undergoing urgent conservation, because the interventions of 19th-century restorers Eugène-Emmanuel Viollet-le-Duc and Jean-Baptiste Lassus—including the spire they rebuilt—were causing damage. The stones they had replaced in the walls and on the flying buttresses were also eroding at a faster pace than the 12th-century stones they had left in place, so the building’s structural integrity was compromised.

In the short term, Notre Dame must be stabilized against further degradation, and a new roof will be required so that the stone vaults that cover the nave of the church do not remain exposed to the elements and susceptible to further degradation.

Only after this basic work is well underway should any consideration be given to replacing the 19th-century spire, which dramatically collapsed in the fire. The restoration ahead raises questions about what history to preserve. The spire that stood on Notre Dame until recently dated to 1859 and replaced a 13th-century spire that was dismantled in 1786. It was not a copy of the medieval spire, for which there were no extant plans. Rather, this neo-Gothic fantasy’s artistic merit lay in its conveyance of 19th-century values concerning the unified French nation based on a rationalized form of medieval architecture.

While that design could be reproduced today, why should it?

This line of thought quickly spirals into endless possibilities for a Disney-like creative reconstruction of the past. Should the 19th-century techniques that were employed to build it also be reproduced? If an earlier spire is to be re-created, why not make a spire truer to the first spire at Notre Dame? Which of its nearly nine centuries should be privileged? What should be done about the fact that much of the original building was lost in the French Revolution? Should its pre-revolutionary state be reconstituted as well? Should we also remove the electric lights in the building?

Any of these fantastic possibilities would constitute a false reproduction of history, for they would nevertheless be done with contemporary techniques and bear the date of the year in which they were made—presumably 2024, the time Macron has promised to complete the reconstruction.

While some cultures and countries, such as Japan, do rebuild their historic monuments anew in the style of the past, they prioritize the endurance of the craft over the permanence of the material and have regulated the techniques for such reconstructions. Western culture typically places greater value on the original material, which is why people pay hundreds of millions of dollars for an authentic da Vinci rather than a good copy of the Mona Lisa. Concerning Notre Dame, we must preserve its past as it is to carry its value forward transparently to the future.

The 1964 Venice Charter, devised by the International Council on Monuments and Sites, established guidelines for conservation and restoration, asserting, “The intention in conserving and restoring monuments is to safeguard them no less as works of art than as historical evidence … . Replacements of missing parts must integrate harmoniously with the whole, but at the same time must be distinguishable from the original so that restoration does not falsify the artistic or historic evidence.”

Thus, if the spire is to be replaced, it should be built in a contemporary style that both harmonizes with the extant monument and also clearly distinguishes itself as a product of our time. And so yes, such a position might translate into an architectural competition among the greatest architects of today—why not Rem Koolhaas, Kengo Kuma or Jean Nouvel?—to create a spire that would at once acknowledge the past in respecting the proportions and style of Notre Dame while also articulating our own way of doing things. This may sound radical, but it would offer greater transparency and, therefore, greater value to every period of history that the monument embodies.

Fortunately for the nostalgic, there are many examples of the 19th-century Notre Dame. A model of the building in 1843 is displayed in the Museum of French Monuments at the Trocadero in Paris, millions of photographs exist in books and online, and it could be re-created and experienced using augmented- and virtual-reality technology. But there is no sense in rebuilding its earlier history in the 21st century, when what we prize about Notre Dame’s history is that what is there really was made in a different cultural milieu.

Complicating the forthcoming restoration, however, is the fact that Notre Dame is a living, breathing, functioning monument that requires constant maintenance, even under ordinary circumstances. Indeed, on a daily basis, Notre Dame receives up to 50,000 visitors from all over the world, while also being an integral part of the city of Paris and its inhabitants that holds daily services for Catholics.

Before the fire, the way the building was being used did not work well for anyone. An unending stream of tourists was funneled through the outer aisles (in fact, I used to call it the “discothèque” because of the close quarters, dark interior and all the blinking lights from camera flashes), while the devout could sit in the nave near the altar, although the services were largely overwhelmed by the crowds around them.

Surely the heat and humidity generated by the crowds in the building were not good for the building’s structure either. So this moment could be the opportunity to reconcile the different needs of the devout and of the tourists in a better way.

As Notre Dame now benefits from a surplus of new funding for its restoration, those in charge must be careful not to change fundamental aspects of it. The monument should remain a living part of the city and not become isolated from it by a barrier and tickets that would turn it into a museum. Moreover, the restoration of Notre Dame must under no circumstances become an opportunity to impose a false history on the cathedral at the expense of what is extant.

Something along these lines recently played out at Chartres Cathedral, which sustained a decade of restoration that imposed a 21st-century interpretation of its pre-modern interior at the loss of its many 13th- through 19th-century layers. The Venice Charter clearly states that a unity of style is not the goal of a restoration—the past should not be fabricated to align with people’s imaginations or expectations of it. This is what some call “creative iconoclasm.”

Whatever is done should be easily identifiable as different from the older parts and clearly documented as such to allow future generations to understand the past on their own terms.

Notre Dame was the first building constructed entirely in the Gothic style without any significant interruptions, from 1160 to about 1340. It remains one of only a few extant monuments in Paris that display architecture and architectural sculpture from the 12th through the 14th centuries relatively unaltered and legible as such. Its 19th-century restoration, limited mostly to the upper levels, parts of the exterior and the treasury, should be preserved as examples of that period’s values and practices.

Because there are so few examples like Notre Dame left in the very city that generated this architecture in the Middle Ages, this particularly important and historic cultural and political capital, we must work to preserve its historical integrity while maintaining its functionality as much as possible. Never simple, the past is instead messy, complex, and difficult to understand and interpret. In our drive to control an ever more unwieldy and unstable present, what will it take to preserve our past for the future?

Meredith Cohen is an associate professor of the history of medieval art and architecture at UCLA. She is a specialist of Gothic Paris and has published widely on the Sainte-Chapelle and restoration of Gothic monuments in France. 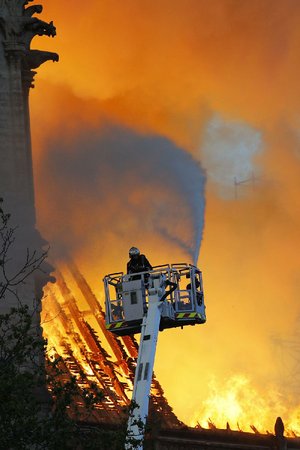 Photo by AP/Francois Mori
A firefighter uses a hose as Notre Dame Cathedral was burning in Paris on April 15. A catastrophic fire engulfed its upper reaches, threatening one of the greatest architectural treasures of the Western world. 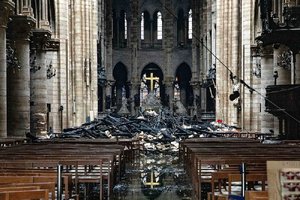 Photo by Bloomberg/Christophe Morin.
Fire-damaged wood and stone sits near the altar inside Notre Dame Cathedral on April 16. 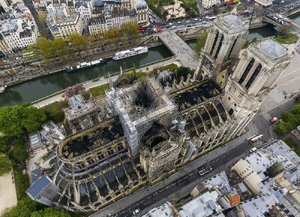 Photo by Gigarama.ru via AP
An image made available by Gigarama.ru on April 17 shows an aerial shot of the fire damage to Notre Dame Cathedral in Paris.
ADVERTISEMENT