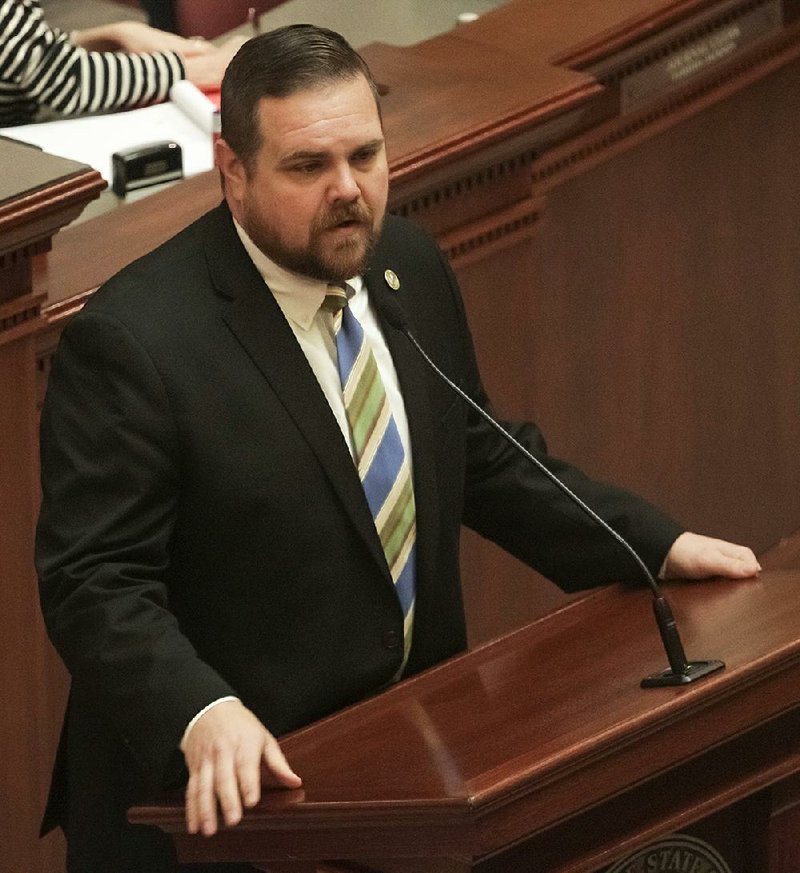 FILE — Rep. Bob Ballinger is shown in this file photo.

Legislative proposals on both sides of the gun-rights debate in Arkansas this year had varied results, with three becoming law, some struggling in committee and one resulting in a viral video viewed more than 2.5 million times around the world.

Republicans, despite their majority grip on the Arkansas Legislature, failed to bring to a vote a proposal to eliminate gun-free zones. The zones were created after a contentious battle in 2017 that resulted in a law allowing people with enhanced-carry permits to take concealed handguns onto college campuses and into public buildings, bars and churches.

In another effort, a "stand your ground" bill that would have eliminated the "duty to retreat" from the state's self-defense laws failed by a single vote in a Senate committee. The impassioned opposition to the proposal by state Sen. Stephanie Flowers, D-Pine Bluff, later gained viral fame.

Democrats also experienced their share of legislative defeats in their efforts to enact new gun-control policies by tapping into discontent over the 2017 enhanced-carry law.

A series of Democrat-backed bills would have implemented universal background checks, barred convicted domestic abusers from possessing guns and created a new type of judicial order to seize weapons from a person considered dangerous. Only one proposal -- the domestic abuser ban -- made it out of committee. It did not become law.

Ballinger pointed to Act 61, which cuts the cost of a concealed-carry handgun license from $100 to $50, and Acts 1051 and 495, which remove the state's prohibition on machine guns, sawed-off shotguns and gun silencers. Those weapons are legal for people with federal firearms licenses.

In a news conference after the Legislature's final adjournment Wednesday, several House Democrats pointed to Ballinger's SB484 as what they were happiest to have seen failed.

The gun-control advocacy group Moms Demand Action for Gun Sense in America also mentioned SB484 in an email to supporters last week about "applauding the defeat of dangerous gun bills."

SB484 resembled "stand your ground" legislation supported by the National Rifle Association in other states.

The bill never gained the public support of Gov. Asa Hutchinson, a Republican, and was opposed by a coalition of police chiefs, sheriffs and prosecutors who called the language unnecessary. It failed to get out of the eight-member Senate Judiciary Committee by a single vote, with Sen. John Cooper, R-Jonesboro, joining three Democrats against the bill.

It was during a late-evening hearing on SB484 that Flowers rebuked her colleagues for attempting to cut short the debate. When told by the committee chairman to stop cursing, her response -- "What the hell are you going to do? Shoot me?" -- garnered millions of views after a clip of the exchange was posted on social media.

Despite repeated attempts by Ballinger to amend the bill, it never came up for another vote in the committee.

Clowney specifically pointed to the NRA-backed enhanced-carry measure, Act 562 of 2017.

After approval of the 2017 law allowing concealed weapons on college campuses and in other public buildings, lawmakers scrambled to amend the law to exempt college sporting events and the University of Arkansas for Medical Sciences. The NRA's lobbyist warned lawmakers that their votes to walk back parts of the law would be counted on the group's scorecards.

Still, the sponsor of Act 562, then-Rep. Charlie Collins, R-Fayetteville, lost his re-election bid the next year to Denise Garner, a Democrat who campaigned against the law.

"I think for a very long time, for a lot of legislators, the NRA was seen as a force that could not be countered," Clowney said. "What we saw in 2017 was a legislator who introduced the most extreme piece of gun legislation that we've seen, a very NRA-friendly piece of legislation. He lost his seat, and he lost his seat by 10 points."

Collins, who now works for the Department of Finance and Administration, did not respond to requests for comment. He has previously stated that he does not attribute his re-election loss to his support for Act 562, but rather to the 2018 success nationwide of Democrats in suburban districts like the one he used to represent.

The NRA did not respond to requests for comment about its lobbying efforts during the 2019 session.

Ballinger said that though the NRA changed lobbyists working in Arkansas between the two sessions, there was no change in the level of lobbying done by the group.

He said the reduction of concealed-carry license fees was "a bill the NRA has been working on in Arkansas a long time." Other major changes, such as the enhanced-carry law, took several sessions to get passed. Ballinger said he would make another attempt at a "stand your ground" bill when the Legislature meets again in 2021.

Other Republicans, however, said they noticed less influence by the NRA in 2019.

During a floor speech in 2017 in which he explained his vote against exempting sports stadiums as a gun-free zone, Rep. Jimmy Gazaway, R-Paragould, pointed to the influence of the NRA in making an "impossible choice." In an interview last week, Gazaway said it "seems like" he heard from the NRA less this session.

Rep. Dan Douglas of Bentonville, a Republican, said he has never been contacted by the NRA in his four terms in office, adding that other Republicans were starting to wane in their consideration of the group's ratings.

"In some legislators' opinion, they're getting too radical," said Douglas, who described himself as a gun owner who supports the 2nd Amendment of the U.S. Constitution.

The NRA has not published grades or endorsements for Arkansas lawmakers or constitutional officers ahead of the 2020 elections.