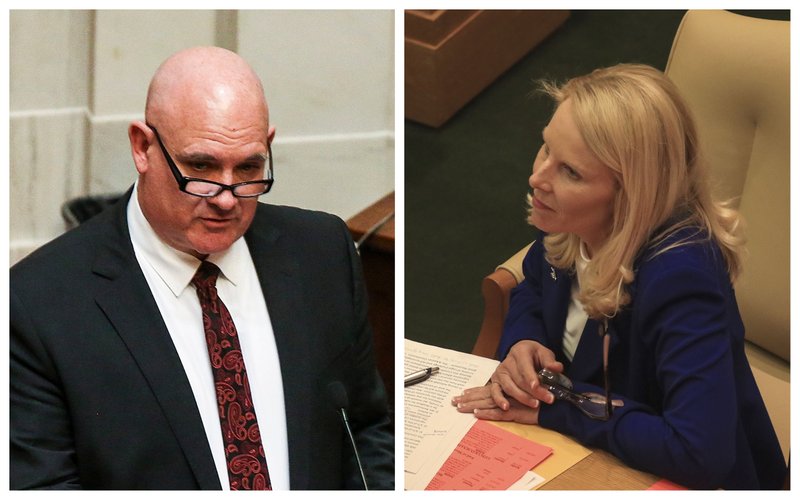 Arkansas voters in 2020 need to approve a proposed constitutional amendment that would make it more difficult to qualify proposals for the ballot because left-leaning groups are using the process to govern the state, Sen. Mathew Pitsch, R-Fort Smith, said at a farm policy event last week.

Rep. DeAnn Vaught, R-Horatio, warned at the same meeting that voter approval of another proposed constitutional amendment, one that would further limit terms of legislators, would mean more lawmakers "to the left" and fewer supporters of farmers.

But the backer of two successful initiated ballot proposals countered that in nearly 40 years, the Legislature has proposed the vast majority of successful changes to the state constitution.

Pitsch and Vaught spoke to about 50 people at the Arkansas Farm Bureau's policy meeting on Wednesday in Little Rock. Later that day, the Republican-controlled Legislature adjourned after meeting for 88 days in this year's regular session.

During the session, the Legislature voted to refer to voters in the 2020 general election a proposed amendment that would make it more difficult for Arkansans to qualify proposed initiated acts and constitutional amendments for the ballot. The proposal also would increase the vote threshold for the House and Senate to refer proposed amendments to voters.

At the policy meeting, Pitsch said, "In Arkansas, the outside world looks at us as an easy market, and what they have done is they have figured out that you can go to about two spots in our state, where there is big populations, predominantly one type of ideology.

"If you collect signatures there, you can change and literally govern -- and I am going to call it what it is -- to the left when our state has predominantly gone middle to the slightly middle right. And when you look at it, it is things like casinos, marijuana, higher minimum wage, things that the liberal-type entities want to get across our country," he said.

"But we are such an easy mark with our constitution to be changed that they come here first because you only have to go to a very small percentage of our state to gather signatures and market in that small part of the state," Pitsch said. "The rest of the state really isn't marketed to at all about their citizen-led initiatives."

"So the state Chamber [of Commerce] -- the Farm Bureau worked with us on developing this -- said, 'We have to protect the constitution,'" said Pitsch, who is the Senate sponsor of the proposed constitutional amendment.

The Arkansas Constitution has been changed 20 times in the past seven elections. Some of those proposals were from the Legislature.

"That is not a constitution written in granite. That's a piece of paper with good ideas thrown at it," Pitsch said.

The proposed amendment for the 2020 ballot -- contained in House Joint Resolution 1008 by Vaught -- would require initiative petitions to have a certain percentage of valid signatures of registered voters from each of 45 counties. The constitution now sets that minimum at 15 of the state's 75 counties.

"What it does is it says if we are going to change our constitution, I need the whole state -- not just two populated areas -- I need rural areas loving it, too," Pitsch said. "You have to go into 45 of our 75 counties as opposed to a few you used to have to go to and you have to gather your signatures there that says that's a good idea. I don't know if there is anybody here from Pope County, but they just got a casino supposedly. I don't know if they wanted it or not."

Amendment 100, an initiated proposal that was approved by voters in 2018, authorizes the state to license four casinos: at Oaklawn Racing Casino Resort in Hot Springs; Southland Gaming and Racing in West Memphis; and to a casino applicant each in Jefferson and Pope counties, neither of which have legal gambling facilities.

HJR1008 would eliminate the 30-day cure period, which gives more time to gather signatures if the sponsor of a proposed ballot measure falls short. The proposal also would require a three-fifths vote -- up from the current majority vote -- in the House and Senate to refer a proposed amendment to voters.

Nate Steel, who served as legal counsel to the Driving Arkansas Forward ballot committee that promoted what is now Amendment 100, said Friday in a written statement that "the casino amendment passed overwhelmingly statewide."

"It passed in 64 of 75 counties, the vast majority of which are rural. The amendment survived two legal challenges and there were no allegations relating to the signature-gathering process," Steel said.

"There may be valid reasons for initiative reform, but I fail to see how the casino amendment provides any argument for it," Steel said.

Attorney David Couch of Little Rock, who led the successful initiated campaigns for Amendment 98 in 2016 -- legalizing medical marijuana -- and an initiated act in 2018 to raise the state's minimum wage, said Friday in a written statement that "since 1980 the constitution has been amended on 42 occasions" and "35 of those amendments (83%) have been amendments referred by the General Assembly."

The changes proposed in HJR1008 would apply equally to initiated amendments and acts, "so it does more than just prevent constitutional amendments," Couch said.

"If the politicians, the lobbyists at the State Chamber and the Farm Bureau wanted to protect our constitution then they should have proposed an amendment to restrict the number of amendments that they can refer since over 80% of the amendments originated with [the Legislature]," he said. "But they did not, and the reason that they did not is that this is not about the number of amendments to the constitution that have been approved by the voters. It is an attempt by the politicians to take power away from the people.

"If he was really concerned about outside influence in Arkansas politics then he should have done something to restrict and make more transparent the millions of dollars in outside dark money that floods into our state to influence elections of our politicians and judges," Couch said in his written statement. "Despite [Pitsch's] contentions, at the end of the initiative process it is the people, voters from all across the state who vote up or down on any measure. It is the same people that vote for him or another candidate. So it's not really the process that scares him. It is that he and the lobbyists are afraid of the will of the people on issues they disagree with."

The Legislature also referred to voters in the 2020 general election a proposed constitutional amendment that would limit future state lawmakers to serving a dozen consecutive years and then allow them to return to office after a break of four years. The proposal is in Senate Joint Resolution 15 by Sen. Alan Clark, R-Lonsdale.

Under Amendment 94, approved by voters in 2014, lawmakers are limited to serving up to 16 years, with senators able to serve longer because of adjustments for redistricting. Amendment 94 loosened limits set in a previous amendment.

Meanwhile, the Arkansas Term Limits ballot committee filed a different proposal that would limit representatives to three two-year terms; would allow for no more than two four-year terms for a senator; and would limit any terms that would cause a lawmaker to exceed 10 years in the General Assembly. The committee would have to gather signatures on petitions to get the proposal on the ballot. In October, the state Supreme Court struck from the ballot a similar proposal by the committee.

Vaught said at the farm policy meeting, "We have a term limit right now, [and] if you don't know, it is 16 years.

"I just finished my third session and I am still learning, and if you get rid of people like us, who fight for farmers up there, you are going to get people more to the left who think that meat is meat is meat whether it is really meat or not in reality," Vaught said Wednesday. "They are not going to be there for you. They are going to be there for themselves more than for y'all. I am not saying I'll be there 16 years even. But I'm saying I don't think 16 years is a bad number."

Vaught said the financial support for the Arkansas Term Limits proposal "is not Arkansas money. Just so you know, it is someone out of California who sends money here trying to change our term limits here in Arkansas, so it is important that you realize where the money is coming from to fund these certain initiatives that go to our ballots also."

Asked by a reporter about whom she was referring to from California, Vaught said Friday, "I can't think of his name."

As for Vaught's suggestion that a 10-year term limit would jettison legislative supporters of farmers, Thomas Steele of Little Rock, chairman of the Arkansas Term Limits committee, said Friday: "Obviously, they have to dream up anything they can to trash term limits. The bottom line is, people don't want career politicians. They just know they won't want these people there for 20 years."