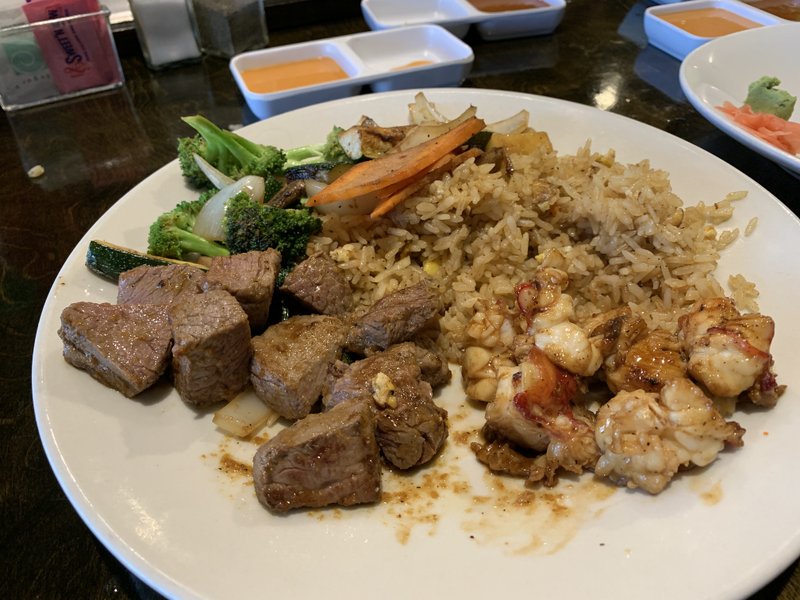 What, we wonder, is Japanese for "revolving door"?

In a local culinary context, it's a term we've coined to mean a restaurant space that turns over with astonishing frequency.

The multistorefront, strip-center space at 1900 Club Manor Drive in Maumelle would qualify: It's now housing its third Japanese restaurant in less than a year.

If you didn't see that the sign on the front of the building had changed and hadn't been keeping up with the game of culinary chairs, you might not notice there'd been a change; the layout has remained almost exactly the same. The "left" storefront, where the entry is, still houses a bar, the sushi bar and about a dozen black composite-top tables with padded wooden chairs, with deeper-padded chairs at the sushi bar (perhaps new, or at least they appear to be less shabby than the ones we encountered in our one visit to Kendo).

The walls sport a recently applied coat of yellow paint. There are three TVs over the bar; two monitor screens at either end of the sushi bar display Japanese still-lifes and appetizing pictures of various appetizers and special rolls. (Mark down the Geisha Roll, $12.95, tempura shrimp, "crab stick," topped with blue crab and seared tenderloin with special sauce, for our next visit. The Kosuke Roll, however, looked very little like the one we got.)

In the other half, which doesn't seem to have changed at all, there are a half-dozen or so teppanyaki/hibachi tables with seating for 10 patrons per.

Kosuke's menu has a few more appetizers than those of its predecessors, some of them we're not used to seeing on local menus — for example, Oyster Tempura ($6.95); Takoyaki ($5.95), five fried octopus balls topped with bonito flakes; and Bang-bang Shrimp ($7.99), similar, at least by description, to the dish of the same name at Bonefish Grill — "crispy creamy sweet & spicy shrimp fried in tempura battered." (That, by the way, is one of several, and possibly the least embarrassing, typos on Kosuke's menu. The description of the Dynamite Roll is particularly cringeworthy.)

If you're not opening your meal with sushi, we can recommend Kosuke's edamame ($4.50), a decent number of in-the-shell soybeans, steamed just enough to remain firm, and dusted with a minimum amount of salt, which we appreciate.

We ordered two "special rolls," artfully done with a nice plate presentation, but there were apparently some problems going on with the sushi bar that night — the rolls arrived separately instead of together, and the folks at the other side of the hibachi table seemed to have had some trouble getting what they'd ordered.

The In & Out Tuna Roll ($11.95) has spicy tuna and avocado inside with more tuna on top — the menu said it's supposed to be seared, but it wasn't, just raw — and avocado, all in a citrus soy sauce that was a very pleasant accent.

We continued our practice of always trying the house-named roll, but we were also attracted by the menu description for the Kosuke Roll ($14.95), light green soy paper wrapping blue crab and avocado, topped by tuna, salmon and "white tuna" with what the menu calls "special kick ass sauce." That was one of the things that drew us in, but it turned out, alas, to only be a minor component. It was a nice, light roll that we can recommend for folks who don't want anything too heavy. The roll slices were a bit larger than bite-sized and a little difficult to negotiate even for our party member well adapted to using chopsticks (i.e., yes, we dropped one).

Kosuke's Sashimi Classic ($25) includes 17 pieces of "standard" fish — tuna, salmon, shrimp, red snapper and escolar, lightly dusted with masago (that's the orange roe), plus some shredded surimi (quasi-crab), thin-sliced cucumber and tamago (that's the sweetened egg). We were pleased with the freshness and the long cut of the fish slices, but we missed the kind of attractive plate presentation that most sushi chefs would have delivered.

At the hibachi table, our teppanyaki chef sliced, diced and commented, and did a professional job of preparing our orders, but the show wasn't as "showy" as it might have been — he did the onion volcano, much to the joy and dismay of the first-time child patron at the other side of the table, but otherwise there wasn't much flash. That didn't bother us particularly, but some folks find the whole teppanyaki show — the jokes, the flipping of the shrimp shell into someone's lap or shirt pocket, etc. — is at least half the meal.

We certainly enjoyed our meal. The Filet Mignon and Lobster combo ($26.50) was a good choice; the steak was exceedingly tender and the lobster only slightly less so. Our Hibachi Chicken ($13.95) was moist and flavorful and nicely enhanced by the teriyaki sauce. The zippy fried rice was worth the upgrade price of $2.50 (over plain old steamed rice).

Hibachi meals — which, by the way, you can order in the other dining room, kitchen-prepared without the show — come with a nice salad in a sort of mayonnaise-y version of the ginger dressing and soup, a pleasant light toasted onion with floating fresh mushroom slices.

Service was generally good, though on a weeknight visit there appeared to be but one waiter taking care of both rooms.