Lawmen search for two escapees from Arkansas jail; 1 said to be leader of white supremacist group 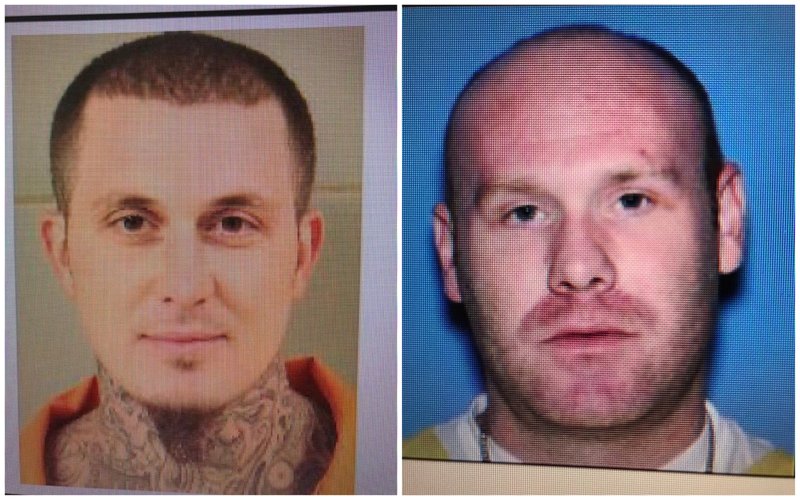 Two escapees from the Jefferson County jail in Pine Bluff remained on the loose Wednesday night after a law enforcement search that began before dawn.

Both men, who were being held on federal charges, should be considered armed and "extremely dangerous," Supervisory Deputy U.S. Marshal Kevin Sanders said.

One of the escapees is Wesley Gullett, 30, of Plainview, who is reportedly the president of the Russellville-based white supremacist group the New Aryan Empire. The other man is Christopher Sanderson, 34, of Jacksonville, who was being held on drug charges.

Sanders said the U.S. Marshals Service in the Eastern District of Arkansas was notified about the escape around 4:30 a.m. Wednesday.

Gullett was indicted in February on federal racketeering charges arising from an investigation into methamphetamine trafficking that began in 2016.

Sanderson, other than having escaped from the Pine Bluff jail with Gullett, has no apparent ties to Gullett or the white supremacist group. The charges against Sanderson are from a separate indictment that has no connection to the Gullett, officials said.

Gullett is a defendant in a racketeering case that accuses members of the Russellville-based white supremacist group of committing violent crimes as part of a methamphetamine trafficking ring, the Arkansas Democrat-Gazette previously reported.

The New Aryan Empire began as a prison gang in 1990 in the Pope County jail with the goal to "preserve the Caucasian race" and to protect its members from inmates of other races, according to the indictment that named Gullett and dozens of others.

Over the next two decades, membership in the New Aryan Empire -- whose members have NAE on their tattoos or patches -- expanded from county jails to state prisons. As inmates finished their sentences and returned to society, they spread the group's racially biased views and its narcotics-based criminal enterprise to communities in Arkansas and beyond until, federal authorities said, the group had roughly 5,000 members.

Woods said Wednesday afternoon that the pair escaped from a pod in the jail that is used to hold inmates for the federal government. The pod has a capacity of 17 prisoners, he said, but he was not certain how many prisoners were detained there when the two men escaped.

The men placed padding in their bunks to make it appear that the bunks were occupied, then made their way to the roof of the building and then to an area beyond the fence to escape, the sheriff said.

An internal investigation has begun to determine who was responsible for the bed count during the time the inmates were unaccounted for, he said.

"Ultimately, it's my responsibility," Woods said. "We're going to get to the bottom of it and make the necessary changes, take whatever disciplinary actions are needed and try to make sure this doesn't happen again."

The sheriff said low pay and difficult working conditions make it hard to find good employees who will stay with the department.

"The turnover here is crazy, and a lot of what led to this has to do with complacency, inefficiency and laziness," he said. "And you put that up against people who are here 24 hours a day, seven days week, 365 days a year, who have nothing else to do other than test our defenses, find our vulnerabilities and try to exploit them."

Prisoners have found numerous vulnerabilities in the county lockup since it opened, and each time a problem area has been identified, it has been addressed, Wood said. But lack of sufficient funding has been an ongoing issue for years, he said.

"What I hope people understand is that this is not the first time and probably won't be the last time," Woods said. "What we can do is try to assess the vulnerabilities we have in this facility and address them, but again, it takes money to do that. I don't appropriate money. I can only do what I can do with what I have."

Sanders said authorities were still working on leads as of Wednesday evening as lawmen searched for the two missing men.