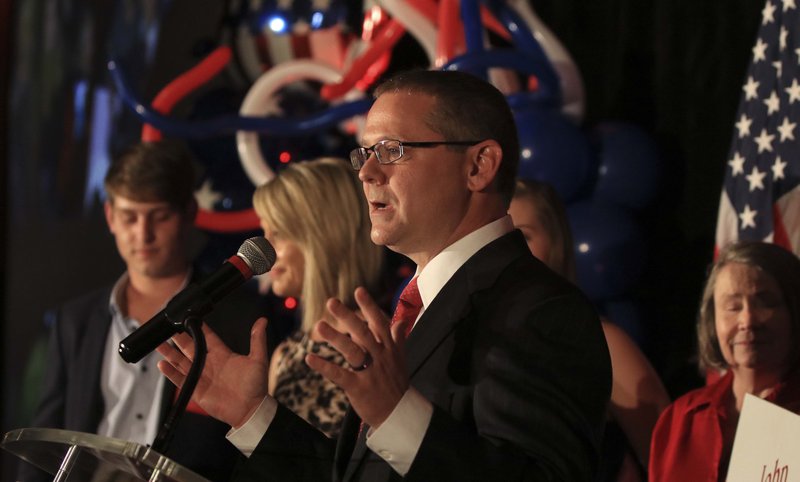 In this file photo Secretary of State John Thurston is shown speaking to supporters the night he was elected.

Officials in the secretary of state's office said Wednesday that they would like to install new voting equipment by the March 3 primary election in the 21 counties that don't have it.

But the office's elections director, Leslie Bellamy, told officials from these counties that they won't have new equipment for next year's election cycle if Republican Secretary of State John Thurston decides to rebid the purchase, as had been suggested.

Officials from some counties disagreed on whether Thurston should seek new bids. Officials from other counties said their counties are so cash-strapped that they won't be able to match state funds for new equipment.

The cost of new voting equipment, which the secretary of state's office purchases, is shared by the state and counties.

Fifty-four of the state's 75 counties had new voting equipment by last November's general election, in which Thurston was elected to succeed a term-limited Martin. The implementation of the new voting equipment was successful and well-received by the public, Bellamy said.

Kurt Naumann, director of administration and legislative affairs for Thurston, told several dozen county officials during a meeting at the Association of Arkansas Counties' building in Little Rock, "We would love to have everything in place, everything implemented at the county level prior to that [March 2020 primary] election."

He said the secretary of state's office expects to receive $8.25 million in state funds in mid-August from the state Department of Finance and Administration, which he called "unprecedented" for the state.

The money would be used to buy new voting equipment for the 21 counties and reimburse three counties half of what they spent to buy new equipment.

The secretary of state's office has estimated that the 21 counties' share of the cost of the new voting machines will be $6.79 million, so the total for the state and counties will be about $15 million, Naumann said.

The office calculated each county's estimated cost based on a formula factoring in poverty rates, per capita personal income, unemployment rates and population change. The formula is based on variables used by the Arkansas Economic Development Commission, Naumann said. The counties' average matching rate is 55 percent and they range from 50 percent to 78 percent in Phillips County, he said.

For example, the secretary of state's office estimates it would cost the state and Pulaski County $1.56 million each to purchase 600 new machines. The state would spend $618,434 and Jefferson County $321,367 to buy 140 new machines, according to estimates provided by Naumann.

That provision is part of Act 808 of 2019, which also increases the homestead property tax credit from $350 to $375 per parcel and provides some excess funds from the property tax relief trust fund to the state's Long-Term Reserve Fund.

"I assume you have received letters of support inquiring, asking that the secretary of state would approve that vendor as someone to come out and consider bidding," Freeman said, adding it would be one way to cut costs.

Huffman said, "There is a lot of efficiencies that one would presume with one vendor.

"But as far as an actual bidding process, that [decision] has not been done right now. We need to know exactly what the needs are first," he said. "Right now, two-thirds of the counties, 80 percent of the registered voters, have one type of equipment, and that didn't happen overnight."

Bellamy said, "If we are going to start taking bids from previously certified vendors or this new vendor that is coming in, I am telling you, you won't have an election on new equipment in this coming up [election] cycle."

"I am very disappointed, as are some of the other smaller counties where the money just ain't there," said Jefferson County Election Commissioner Stu Soffer of White Hall. "What about us poor folks? Jefferson County doesn't have matching funds," drawing applause from some.

Thurston said he asked lawmakers for $15 million in state funding for new voting equipment and they asked his office to develop a plan to split the cost between the state and counties.

"We have some counties that probably can't ever come up with their portion, so we are going to have to go back to the drawing board, to be honest," he said. "It sounds like in some counties it just ain't going to happen."