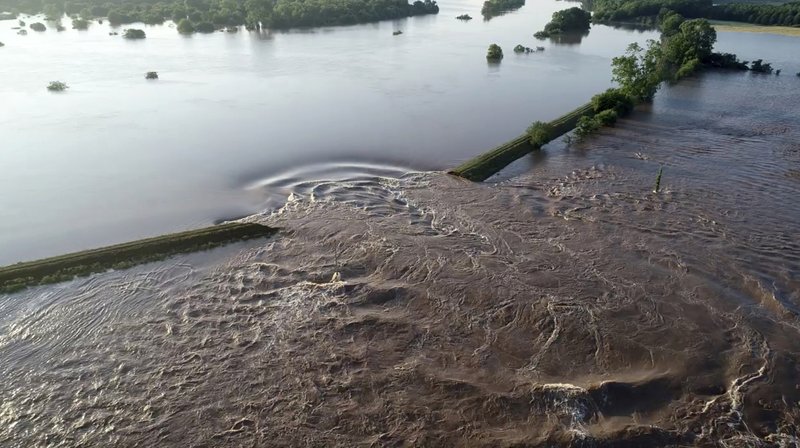 Arkansas legislators should change current law to allow the Arkansas Natural Resources Commission to have some level of oversight in the state's patchwork levee system, a senator told the state's new levee task force Thursday in Little Rock.

That would ensure that a state entity has the authority to check levee districts' compliance with state laws, Sen. Gary Stubblefield, R-Branch, told the task force.

"They are between the federal and the local level," Stubblefield said of levee districts. "In order to get them back into the picture, we need to revisit the code."

Stubblefield is the latest person to recommend that the commission have more oversight of the state's levees.

In Arkansas, often levees are not actively managed and deteriorate into conditions that make them ineligible to receive federal funding to repair them if they are damaged by flooding.

Thursday's meeting was the task force's second session since being created by Gov. Asa Hutchinson's proclamation in late June. The group is responsible for evaluating the state's levees and suggesting improvements to assist with oversight, management and funding of them. The task force was formed after historic flooding this year along the Arkansas River that breached at least one levee and damaged several others.

Hutchinson also asked lawmakers to appropriate $10 million in state funds for the repair of levees ineligible to receive federal assistance because of a lack of compliance with federal levee standards. The levee that broke, the Dardanelle Levee in Yell County, was not in federal compliance.

Funding is a big issue for some levee districts, which, despite having tax assessments, cannot raise enough money to pay for levee maintenance. One Jefferson County farmer said that one levee in his county protects only 12 residents, but the cost to maintain it can reach six figures.

The lack of federal funding is bewildering, one lawmaker said.

"I don't understand how we don't have major funding every year for such an important safety component for our infrastructure," state Rep. Vivian Flowers, D-Pine Bluff, told the task force.

"I've never run into an issue that has been more critical in my mind and read things and come to meetings more confused as about what I'm supposed to be doing," she said. "There's so many moving parts." 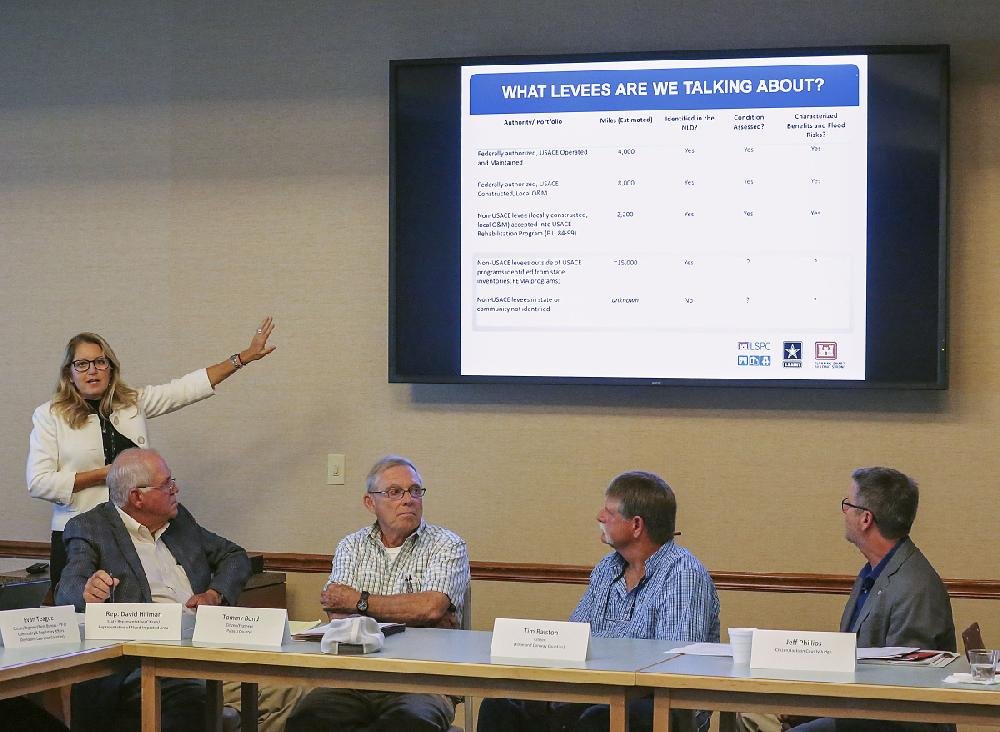 Flowers is not among the four lawmakers, all Republicans, on the task force but said she plans to attend every meeting.

"I don't know of any other federally defined, overseen, infrastructure-based project in this country ... where there's not major funding coming from the federal government," she said, noting state Medicaid as an example, which receives large amounts of federal dollars.

Task force member Hal Kemp, an attorney in Pulaski County, said the state currently has 25 laws that address levees and that a major problem with levee management is people not adequately understanding the roles of local levee boards and the U.S. Army Corps of Engineers, which evaluates levee safety. He cautioned against drafting any new laws just yet.

Commission director Bruce Holland held up an example of an annual report that a levee district sent its county clerk. It included a note listing its board members and stating that the board had not held any meetings.

"We don't know if they had an assessment," Holland said, listing off several other things that he wanted to know but that weren't in the report. A property tax assessment for residents whose land is protected by a levee would raise money to maintain, repair and improve the levee.

Some districts have submitted considerably more information, but many don't, Holland said.

The reports are required under a 2016 law sponsored by Sen. Jason Rapert, R-Bigelow. That law outlines what districts must report to their county clerks, who then forward the reports to the commission. The commission is barred by law from having any authority over levee districts.

"You have absolute noncompliance with what's being reported," Rapert said.

In 2016, pushback from local entities, including active levee boards, stopped a Rapert proposed law that would have given the commission more oversight, as recommended by the Arkansas Legislative Audit in 2009.

"What I beg of the state and this task force is let's not take away from us the abilities to get these inactive and defunct boards going again just because everything is going well with your district," Rapert said.

Any law passed can specify what the commission's authority would be, Rapert said.

"We don't want to interrupt" the work of well-run districts, he said. "If it ain't broke, don't fix it."

Stubblefield expressed frustration over the lack of information from districts and counties, noting that six counties along the Arkansas River have not reported to the commission.

Task force members also wondered what information they could get from the Corps of Engineers that is not publicly available because of the U.S. Department of Homeland Security's review of the National Levee Database's new website.

Corps engineer Catherine Sanders said the Corps cannot put inspection reports on the website or make them publicly available to anyone but levee board members because the department has determined that levees are "critical infrastructure." Providing reports about levees' structural deficiencies could provide nefarious entities with information about what parts of levees to target if they intended to destroy them, Sanders said.

No U.S. levees have been targeted thus far.

Sanders gave a presentation Thursday to the task force about the Corps' levee safety activities.

In 2014, Congress passed a law envisioning many changes to federal oversight of levees but funded only the inventory and review of them.

Sanders explained that the Corps wants to check with state and local entities across the country to make sure its National Levee Database is complete and lists all levees. Then, the Corps plans to review them and prioritize them. After that, the Corps would work to get legal access to the private property on which a prioritized levee sits and work with local groups to maintain it.

Dardanelle Mayor Jimmy Witt questioned whether the Corps regularly seeks legal authority to access private land. He noted that people have seen Corps officials entering property without previously seeking permission, leaving the people to believe that the levee is the Corps' levee, even if it's supposed to be run by a board.

Elmo Webb, levee safety program manager for the Corps' Little Rock district, said Corps staff members are supposed to seek permission for access, but he added that Corps personnel must inspect levees to ensure they meet standards and must authorize levee maintenance.

Witt said he did not realize that the Corps needed to authorize maintenance on levees that it did not own.

That confusion is an example of why existing laws may be OK, but implementation of them and education about them is poor, Kemp said.

"There's been a complete breakdown in this process," he said, adding that new laws could muddle the situation more.

"There is tweaking that can be done, but we have a good scheme in play," he said. "We just don't know how to use it, by and large."