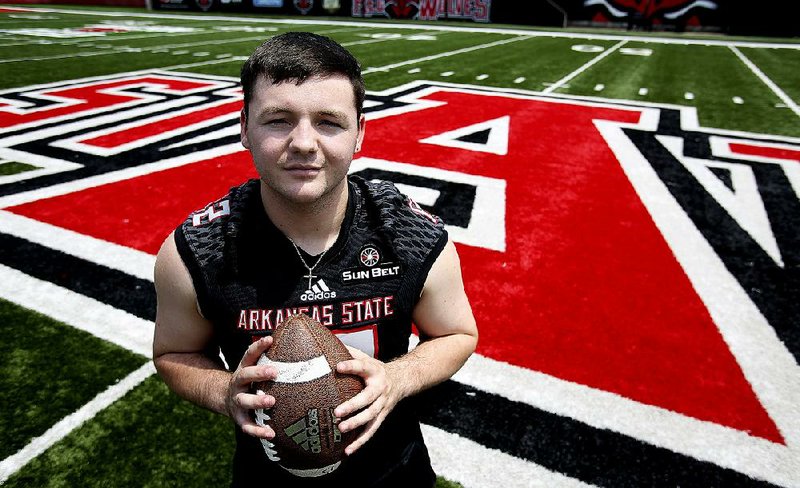 Junior quarterback Logan Bonner has passed for 151 yards and 2 touchdowns in 9 games over three seasons — including a redshirt year — at Arkansas State. Bonner is expected to be the Red Wolves’ starter entering fall practice. ( Arkansas Democrat-Gazette / Thomas Metthe)

JONESBORO -- On Wednesday night, the eve of when Arkansas State players were set to report to Centennial Bank Stadium for the start of training camp, Logan Bonner could hardly sleep.

The redshirt junior quarterback has mostly spent the past three years on the sidelines, watching three-year starter Justice Hansen guide the Red Wolves' offense, all the while patiently waiting his turn.

But Hansen, who passed for 10,133 yards, 83 touchdowns and completed 62.5% of his throws at ASU, is gone, and the prevailing consensus around ASU's football facility right now is that Bonner is firmly the guy.

"I didn't sleep last night, and I know we're not even touching a football today," Bonner said Thursday at ASU's Media Day. "I'm super excited. I can't wait. I've been waiting years for this."

A native of Rowlett, Texas, which is about 30 minutes northeast of Dallas, Bonner redshirted his first year at ASU in 2016. Since then, he's rarely seen the field and it's mostly been in mop-up duties.

During spring practice this year, Bonner experienced a setback when he tore cartilage in his ribs, forcing him to miss two weeks.

Bonner, though, despite his vast inexperience, has steadily continued to establish himself as a vocal leader on the team, and it's a difference that teammates have taken notice of.

"I think Logan's ready to take this role and run with it. I'm excited to get to play in front of him all season."

And now, since for the foreseeable future this is his team, there's even more expectations and pressure. But heading into camp, Bonner has the support of the people making the decisions and of his peers.

"It's Logan Bonner's job, day one. Somebody's got to pass him up," Anderson said. "He's earned that right and that opportunity. It is his job till somebody knocks him off. ... I think there's a bunch of people that would love to have Logan Bonner as their starting quarterback."

Anderson said it would take a big effort for someone else to potentially take Bonner's job.

Redshirt senior Carson Coats, a Jonesboro High School product, freshman Coltin Clack, a Texarkana native, freshman Layne Hatcher, who transferred from Alabama but is immediately eligible this season, and freshman KaRon Coleman are the other quarterbacks listed on the roster.

Coats, Clack and Hatcher are all expected to push Bonner.

"We're gonna take that entire room and try to elevate it," first-year offensive coordinator and quarterbacks coach Keith Heckendorf said. "I think Logan senses that opportunity, as well as the other quarterbacks in the room, but he's been a great teammate. He's done whatever the team needed for the last three years. Even when it wasn't great for him, it was what was best for the team at that time.

"He's gonna take the first snap [today] at quarterback. It's his job to lose, but there's gonna be great competition, and he knows everyday he's got to come to work."

All of that competition begins this morning during the Red Wolves' first practice of camp, and three years of buildup and, at times, angst will come to an end for Bonner.

He admitted Thursday that there were some difficult moments over the past three years, when he realized he wasn't going to see the field that much. During his freshman year, he wondered if he'd ever play.

"You don't play for a year or two, and it's like, 'Damn it, am I even good enough to play?' It creeps into your head," Bonner said. "You don't say it out loud, but in the head, you question yourself, and, like, why am I here? But you just got to keep pushing.

"I have a good support system in my family. It's been tough days, for sure, but I think that you just got to get over that hump of like, yeah, I'm here for a reason."

Beginning today, Bonner will finally get his shot to prove that he's ready to lead this Red Wolves team, which was picked to finish second in the Sun Belt West Division and is loaded with returning playmakers.

ASU's Sun Belt championship hopes in 2019 depend on it.

"I think the guys are really behind me," Bonner said. "I think after [the] Nevada [loss in the Arizona Bowl] that a lot of the guys were like, when we came back, 'Hey man, this is your team.' They understood that, and I really respected that. I think overall they're ready to go, and I think they're ready for me to lead them." 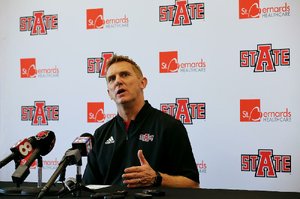 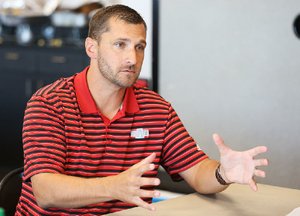 Photo by Thomas Metthe
Arkansas State offensive coordinator Keith Heckendorf said Logan Bonner will take the first snap at quarterback today because he’s earned it. “He’s done whatever the team needed for the last three years,” Heckendorf said. “Even when it wasn’t great for him, it was what was best for the team at the time.”