ON FILM: Tarantino movie has the 'Wow' factor 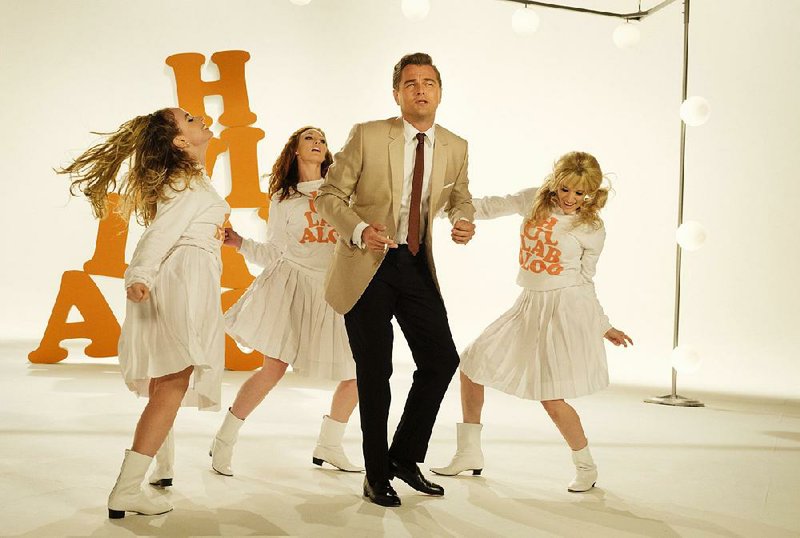 Rick Dalton (Leonardo DiCaprio) is a fading TV star trying to hang on in a changing industry in Quentin Tarantino’s Once Upon a Time … in Hollywood.

Philip Vandy Price, the critic who runs the recommended Reviews From a Bed site (reviewsfromabed.com), was nice enough to have me on Initial Reaction -- the YouTube show he hosts -- last week to talk about Once Upon a Time ... in Hollywood.

As the title suggests, the premise of the show is elegant and straightforward -- it seeks to capture the spontaneous reaction of movie enthusiasts immediately after watching a newly released film for the first time. What it's aiming for is first impressions, not necessarily the considered take a movie critic might give after thinking about a film for a day or two.

And, having participated in the project -- see the results at youtube.com/watch?v=0UvdAx8Gazo&t=196s -- I can vouch for the authenticity of the content. While a few minutes were spent setting up and attending to technical matters (lights, cameras, microphones) what ended up on video is unrehearsed and spontaneous.

Philip and I sat and talked about the movie. The cameras captured that conversation. I was impressed with the professionalism of the whole enterprise; I'll leave it to viewers to decide if we said anything interesting or worthwhile about the film.

[Video not showing up above? Click here to watch » https://www.youtube.com/watch?v=0UvdAx8Gazo]

I was nervous about it, not because I'm nervous about appearing on camera (I've had a fair bit of TV and radio experience and can always fall back on the advice that Chris Matthews once gave me when I was a guest on Hardball: When in doubt, be more declarative and forceful) but because I often don't really know what I think about a movie immediately after seeing it. Most of the time when I walk out of a movie I'm considering my response -- ideally I'd have at least a to few days to think about a film before trying to review it.

And I still don't know how I feel about some of Quentin Tarantino's previous films. He's a brilliant but clinical director most of the time; his movies can be cynical machinations. I enjoy a lot of his work and admire parts of all his pictures but haven't completely loved any of his movies since Jackie Brown (which is a stereotypical film critic position).

On Initial Reaction I said I thought he was like a "thinking man's Michael Bay" in that it seems he scrapbooks odd images and bits and pieces from movies he loves and repurposes them in his work. Part of the fun of Tarantino movies is spotting his influences and inspirations.

But maybe we ought to just enjoy what we enjoy, even if our better selves recognize it as cheap or exploitative.

Talking about any Tarantino film is fraught; I'm constantly interrogating any pleasure I get from his particular brand of hard violence. I'm constantly wondering about the filmmaker's -- and the critic's -- responsibilities.

But I wasn't going to decline the chance to see the movie and talk about it. I was a child in Southern California in 1969 when Sharon Tate was murdered and have some very specific memories of how things felt back then.

While I try to avoid reading anything (especially studio-generated press notes) about a movie before reviewing it, in this case I was required to edit Piers Marchant's (excellent) review of the film for this newspaper. So I knew what Piers had to say about the film. And that he is a fellow Tarantino skeptic. And that he'd been won over by the movie.

If you watch the Initial Reaction video, you might be able to tell that I was deeply affected by Once Upon a Time ... in Hollywood. It's probably not too much to say that I love the movie and that I'm anxious to watch it again in the company of my wife (who couldn't come to the Initial Reaction showing because, you know, real job).

There are certain cues in the movie -- the air-checks of AM disc jockeys Robert W. Morgan and "The Real" Don Steele (the main voices of the market-dominating 93 KHJ); the snippet of post-modern late-night horror movie host Jerry Vance (better known as Seymour "the master of the macabre, the epitome of evil") on Cliff Booth's television that transported me back to my 10th year. The cars, the colors, the clothes, the music: these are the textures I remember.

It felt more like Roma than any other Q.T. movie; you had to have been there to reconstruct such a specific universe. And Tarantino was. He was a couple of years younger than I, growing up in Torrance, watching movies that were above his grade level.

That some of the same things caught our attention might not be surprising, but it feels like a miracle to see one's latent memories projected on a screen. On more than one occasion, I have written about the not entirely wholesome effect Dean Martin's Matt Helm movies had on me; I loved Steve McQueen and The Great Escape and westerns in Technicolor and black-and-white.

Obviously someone who lived a different experience would have a different reaction to Tarantino's overstuffed pop fairy tale, but this movie hit close to home. I've watched movies in the Bruin, the Westwood theater near UCLA where Margot Robbie as Sharon Tate watches herself (the real Sharon Tate) in The Wrecking Crew.

I know a lot about the Manson Family, and when Tarantino has Tate play records by Paul Revere and the Raiders I know that the band's lead singer, Mark Lindsay, was -- along with Terry Melcher and Candice Bergen -- living in the house she rented with Roman Polanski immediately before they moved in. Tarantino doesn't lean into that, but it informs his filmmaking, just as his knowledge that Polanski briefly considered Bruce Lee (who trained both Tate and Polanski in martial arts) a suspect in his wife's murder.

Hemingway once said if you know your subject well enough, you don't have to tell your readers as much. They will simply sense your authority.

Anyway, if I were reviewing Once Upon a Time ... I'd address the fact that while Robbie is in the movie a lot, she doesn't have a lot of consequential dialogue. And that doesn't bother me, though I understand how some (with different life experiences) might take the film as a valentine to the bad old days when Hollywood was Hollywood and starlets were a kind of chattel. An argument can be made that the film is nostalgic for a time when boys made the rules.

But that's not what I took from it. In real life, we know what happened to Sharon Tate -- and if you are of a certain mind you can argue that the '60s were murdered in that house on Cielo Drive on that hot August night. (I've made that argument a few times; it proceeds from the dread and angst the Manson murders personally produced in a 10-year-old living in SoCal's Inland Empire.)

I can criticize the movie. It's too long. There's an element of fan service in the inevitable third act spasm of violence.

But it has been a few days since I've seen it, and I'm willing to stand behind my initial reaction. 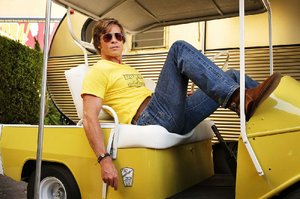 Cliff Booth (Brad Pitt) may be more gofer than stunt man these days but he’s still the coolest creature in Once Upon a Time … in Hollywood.

Print Headline: ON FILM: Tarantino movie has the 'Wow' factor