Yellow jackets are beneficial but can be dangerous 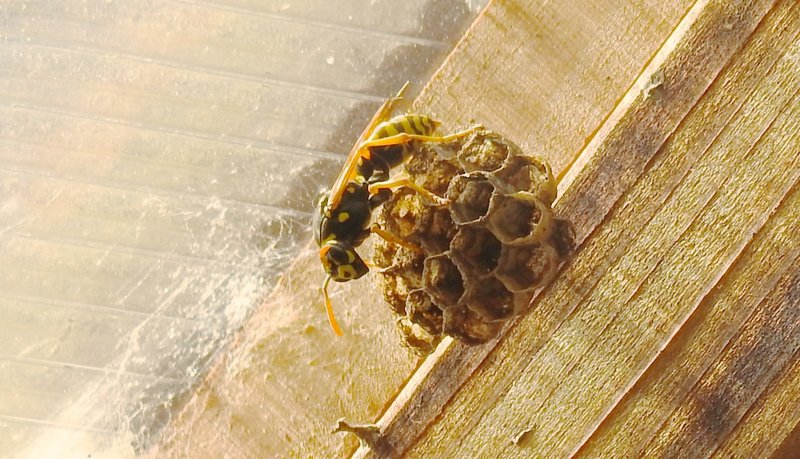 This May 6, 2019 photo shows a Yellowjacket on the ceiling of a hobby greenhouse near Langley, Wash. Yellowjackets typically live in underground burrows although some species build paper nests elsewhere, as shown here. They can be vicious around people and pets and attack vigorously when threatened. (Dean Fosdick via AP)

Yellow jackets play a supportive role in gardening but can be dangerous around people and pets. People sensitive to bee venom should be especially careful from August through October, when yellow jacket numbers peak.

They attack when threatened, and are known to crash cookouts too.

"Yellow jackets, hornets and paper wasps are all beneficial predators of soft-bodied insects such as caterpillars, grubs and flies," said Heather Stoven, a horticulturist with Oregon State University Extension Service. "However, yellow jackets will often begin to scavenge late in the summer into fall as their typical food sources often become more limited.

"They begin to look for carrion (think your hamburger at a picnic) as well as sugary foods ... which can lead to increased negative encounters," Stoven said.

Yellow jackets deliver the insects and food they forage to the young in their nests, while nourishing themselves on nectar from flowers.

That makes them inadvertent pollinators, although they aren't as efficient as honeybees since their shiny bodies have little body hair where pollen can collect for transfer from plant to plant, Stoven said.

"Their nests are usually small and placed under protective overhangs on houses and garages," said James Dill, a pest management specialist with University of Maine Extension. "Where you run into a problem is when you're mowing the lawn and come across a ground nest. You don't usually see those until it's too late. Disturb those nests and they react terribly."

Yellow jackets are drawn to food and water, the latter particularly during droughts.

It's best to remove nests found in high-traffic areas, but do so carefully, she said. Probably the smartest option is calling in an exterminator.

If you do want to take on the job yourself, then use quick-acting, kill-on-contact insecticides labeled for yellow jackets that allow treatment from safe distances when aimed at nest entrances, Stoven said. Apply the insecticide when it's cool, and avoid using a flashlight, since wasps are attracted to light.

"Wear protective clothing that covers your skin," Stoven said. "If a nest is in a location that can be avoided, it could potentially be left undisturbed. The queen and workers will die off when cold weather arrives."

Traps, commercial or homemade, are another kind of management tool, although they're effective only in small areas and don't affect the nests where queens produce colonies anywhere from 1,000 to 5,000 wasps, said Susan Jones, a professor of entomology at The Ohio State University.

"Certain yellow jackets have been known to fly from 300 to 1,000 yards from their nest in search of food," Jones said. "Traps will not rapidly knock down yellow jacket populations. For effective use at outdoor events, traps should be placed out two or more days prior to the event."

"They like split wood, not the bark," he said. "Keep the piles covered, which also keeps the wood nice and dry."

Print Headline: Benevolent or fearsome? Yellow jackets can be both