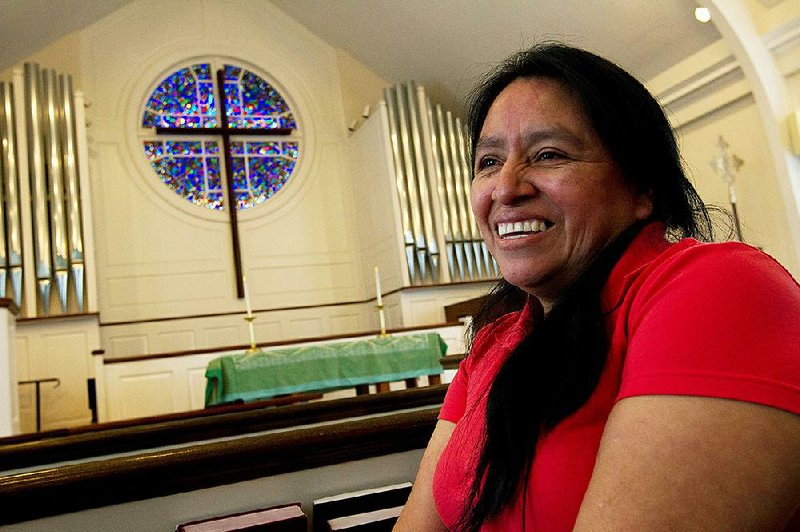 Maria Chavalan-Sut, an immigrant from Guatemala, speaks during an interview at Wesley Memorial United Methodist Church in Charlottesville, Va., on July 17.

CHARLOTTESVILLE, Va. — Devotional candles to St. Jude, the Holy Trinity and the Virgin of Guadalupe sit on a bookshelf by the door of a classroom in a United Methodist church. A sewing machine is a few feet away between a bed and a set of wicker furniture. In a corner, an electric skillet warming chicken thighs acts as a kitchen.

It is from these makeshift quarters that Maria Chavalan-Sut, an indigenous woman from Guatemala, has spent 10 months staving off a deportation order to a country that she says has scarred her life with violence, trauma and discrimination. Her fight for asylum could now cost her at least $214,132.

Chavalan-Sut is among a number of immigrants taking sanctuary at houses of worship who has received notices from immigration authorities notifying them of huge fines for not complying with deportation orders — the result of an executive order issued last year by the Trump administration. It’s unclear how many immigrants have been targeted, but Church World Service, an organization that supports refugees and immigrants, is aware of at least six who’ve received letters.

“Where am I going to get [money] from? I don’t know,” said Chavalan-Sut, who worked for a while at a restaurant after arriving in Virginia more than two years ago but hasn’t been able to hold a job since seeking sanctuary. “God still has me with my hands to work, and they’re the only thing I have. If God thinks that with my hands I can pay that, give me a job.”

Chavalan-Sut began living at Wesley Memorial United Methodist Church on Sept. 30, the day she was told to report to a U.S. Immigration and Customs Enforcement office for deportation. She crossed the border into the United States and was detained in November 2016 near Laredo, Texas, after a weekslong journey that started in Guatemala’s capital. She said her decision to emigrate and leave her four children behind came after her house was set ablaze.

Chavalan-Sut, 44, doesn’t know who set the fire while she, her children and their father were asleep inside. But she believes it was linked to a dispute over land rights because she is an indigenous woman, her immigration attorney, Alina Kilpatrick, said.

Chavalan-Sut said an area fire official declined to investigate because there were no fatalities.

Immigrants have sought relief from deportation at houses of worship because immigration officials consider them “sensitive locations” in which enforcement action is generally avoided. Forty-five people currently live in sanctuary at churches across the United States, up from three in 2015, according to Church World Service.

As with Chavalan-Sut, both women received notices of fines. The three letters were signed June 25. Arevalo-Herrera’s fine is for $295,630, and Espinal-Moreno’s was set at $497,777.

Attorneys, activists and faith leaders have spoken out against the f ines. Krish O’Mara Vignarajah, president and CEO of Lutheran Immigration and Refugee Service, characterized them as a “scare tactic.”

“So long as [Immigrations and Customs Enforcement] continues to respect its own policy of avoiding sensitive locations like churches, which may not be a given, the agency will have to continue to resort to psychological games to coerce families out of their legal protections,” she said.

Wesley Memorial joined the sanctuary movement after an immigrant rights activist contacted the Rev. Isaac Collins asking for help. The church’s 31-year-old pastor said that while he has heard from other pastors who have expressed concern over mixing religion and politics, for him making Wesley Memorial a sanctuary was not a political move: It was a decision based on Christian ethics.

“When you start at, ‘Maria is a human being who’s in trouble and needs a place of safety,’ OK, [that’s] very firmly in the realm of ideas in Christianity about hospitality and human rights and loving our neighbors,” he said. “The church is a space that can provide that safety and that neutral space while she figures out due process. … It doesn’t get political until your political party is the one saying ‘Actually, Maria doesn’t deserve all these things.’”

Since seeking sanctuary, Chavalan-Sut has been able to talk to her children, now ages 7, 11, 14 and 21, for an hour a day, making sure the youngest ones do their homework. The oldest is now pursuing a degree in civil engineering. She left them all under the care of a family in Guatemala City. She weeps thinking about them.

The devout Catholic participates in Sunday services at Wesley Memorial with the help of a Spanish translator. She prays daily, and tends to a garden of flowers, herbs and vegetables. She sews headbands and bags using fabric that a son mailed from Guatemala. She can’t sell the items, but she accepts donations in exchange. She occasionally cooks tamales and other traditional foods at the church’s large kitchen.

At least one volunteer guards the church property around the clock. People take turns buying her groceries. Some are helping her learn English. All volunteers have been instructed to ask for a signed warrant should immigration officers show up.

The church has also provided Chavalan-Sut with a mental health therapist. The fire at her home is only one of many traumatic events she says she has experienced for being Kaqchikel, an indigenous Mayan group. As a 7-year-old living in Guatemala’s highlands during the country’s 1960-96 civil war, she saw her cousins buried alive.

Carissa Cutrell, a spokeswoman for U.S. Immigration and Customs Enforcement, said a judge ordered Chavalan-Sut to be deported after she failed to appear for an immigration hearing in July 2017. Kilpatrick, the immigration attorney, said that was because the notice to appear did not have a date and time, something immigrant rights activists say is common.

Chavalan-Sut’s motion to reopen her case was denied in July 2018. An appeal filed in December is pending in the Board of Immigration Appeals.

Cutrell said the Immigration and Nationality Act allows the agency to impose civil fines on individuals “who have been ordered removed or granted voluntary departure and fail to depart the United States.” The fines are calculated at $799 a day, from the date the immigrant took sanctuary to avoid removal.

Immigrants like Chavalan-Sut who have received fine notices have 30 days to dispute them in writing or request an interview to respond, which would mean risking leaving their sanctuaries. It’s unclear whether any of the immigrants, including Chavalan-Sut, have filed paperwork to fight the fines.

For now, Chavalan-Sut has turned to self-help books to try to cope. The Spanish versions of The New York Times best-seller Rising Strong by Brene Brown and bilingual evangelist’s Jason Frenn’s Power to Persuade are among the stack of books in her room.

In sanctuary, she said, she has begun to heal.

“So, I say, I’m just an example of the decisions that governments make,” she said. “They do not measure the damage that they are making. They are the ones who plant the seeds, and then many people leave their countries. … Why do they leave their country? Because they cannot stand it anymore.”

Information for this report was contributed by David Crary of The Associated Press. 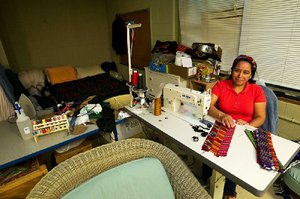 Photo by AP/JOSE LUIS MAGANA
Maria Chavalan-Sut shows her handmade headbands, sitting at her sewing machine, in her room at Wesley Memorial United Methodist Church in Charlottesville, Va. The Guatamalan immigrant uses fabric that a son has mailed to her to make a range of goods that she cannot sell, but can accept donations in exchange.