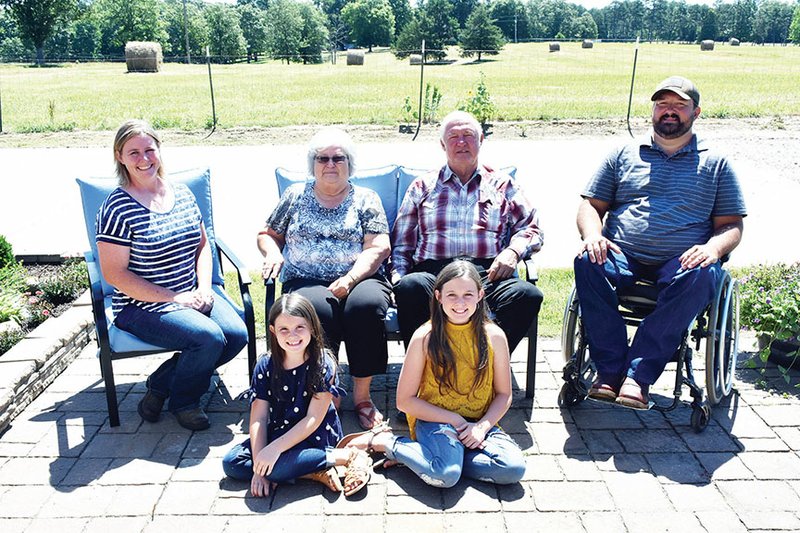 The Jerry Duvall family of Hattieville is the 2019 Conway County Farm Family of the Year; they have also been named the Western District Farm Family of the Year. Family members include, front row, from left, Payton Duvall, 8, and Brooke Duvall, 12; and back row, Jayme Duvall, Kathy Duvall, Jerry Duvall and Jeremy Duvall. The Duvalls raise hay, timber, corn and soybeans, as well as cattle and poultry. ( Staci Vandagriff)

HATTIEVILLE — Jerry Duvall has been farming for more than 50 years.

“Really, all my life,” said Duvall, 70. “I worked alongside my father, A.J. Duvall, from as early as I can remember.”

The Duvalls operate 1,400 acres and raise hay, timber, corn and soybeans, as well as cattle and poultry. They will be judged, along with seven other district winners, to determine a state winner, to be announced Dec. 6 at the Farm Family of the Year Luncheon at the Wyndham Hotel in North Little Rock.

Jerry said he was “surprised” to learn his family had received the county honor in May, then the district honor in June.

“I know a lot of the people in the counties in this district and thought some of them deserved the honor more than us, … but I was tickled to get the honor,” he said.

Kathy, who grew up on a farm near Hector, said she was also surprised by the honors.

“We were pleased,” she said, adding that she and Jerry have been married 49 years.

“The Duvall family exemplifies the term ‘farm family,’” said Hank DeSalvo, vice president and branch manager for Farm Credit of Western Arkansas and chairman of the Conway County Farm Family of the Year Selection Committee. “They have shown through strong faith and hard work that you can overcome most any obstacle. They have done so while also passing their passion for farming and rural community on down to the next generation.”

The Duvalls raise poultry for Tyson Foods and have a cow/calf operation with 70 calves on cows and 40 weaned calves. They have three poultry houses and raise 420,000 birds per year.

Their row crops are mostly for their feeding operation.

Jeremy and Jayme operate the poultry houses. They also have a hobby of breeding and showing dairy goats. They use social media as a way of marketing the goats and promoting farming.

“After retiring from construction, I still do some work, mostly for farmers or ranchers, as in building roads, clearing, building ponds and poultry-

house pads,” Jerry said. “It is hard to say no to folks I have done work for in the past.”

Other enterprises the Duvall family is involved in include sprigging Bermuda grass, selling timber and leasing mineral rights.

Jeremy also does excavation work; he operates a dozer and is hired to build ponds, pads for barns, houses and poultry houses.

“This is important to our total operation because it provides income to the overall farm,” Jerry said.

Jerry said that on June 17, 2013, Jeremy was returning home from the broiler farm and was involved in a life-threatening car accident. He spent two weeks in intensive care and four weeks in rehabilitation. He was able to return home but is paralyzed from the chest down.

“He has had to find different ways to help operate the farm and adapt to getting on and operating equipment,” Jerry said. “He has done an amazing job of adapting to his disability. Jayme had to learn how to manage the broiler operation. She has done a wonderful job at it.”

Jerry said he feels blessed to now live and work on the farm where he was born and raised.

“Almost from the time I could walk, I worked alongside my father and mother, A.J. and Woodene Duvall, and siblings on the family farm,” he said.

“I do not know how that dog knew how to be a baby sitter, but where I went, that dog went. If I went to the spring, he would go right along with me. And if I got too far away, that dog would raise the alarm,” he said.

“By the time I was 6, I was breaking ground with a white Super A Farmall [tractor]. Farming truly was a family affair. We raised cotton until I was about 10 years old. After that, we raised truck patches that included Tommy Toe tomatoes, cucumbers, gherkins and sweet and hot banana peppers for the Atkins pickle factory, and whatever else was needed in the market,” Jerry said.

“We milked cows, then churned that milk for butter. We raised chickens for eggs and meat. It may have been a hard way to grow up, but it was gratifying to know that we were self-sufficient. There was a great deal of comfort in knowing that food is either growing on the farm or a mere hunting trip away,” he said.

“Even after I grew up, I continued to work on the farm. From 1972-1977, I owned a tire shop and front-end shop in Russellville, but every evening would find my wife and me at the farm working on some project or other. In 1979, we moved to Oklahoma, where I joined my uncle in an entirely different kind of farming from what I was used to — aquaculture. We raised and sold minnows. We lived and worked in Oklahoma for 10 years before returning to the family farm in Arkansas,” Jerry said.

“In 1989, we built poultry houses to go along with our beef-cattle operations and also did custom work for other farmers and ranchers,” he said.

“Our daughter, Kimberly Gale Duvall Renteria, grew up working on the farm and credits that background for her desire to pursue a bachelor’s degree in agricultural business from Arkansas Tech University,” Jerry said. “She earned her degree in 1995 and began law school in 1996. She earned her juris doctorate in 1999 at the University of

“She worked for the Arkansas House of Representatives for 17 years before deciding to move herself and her daughter, Lali Grace, back to the family farm. Currently, she is a faculty member at Tech, teaching in the behavioral sciences department of the criminology and criminology justice program. She and her daughter enjoy growing organic vegetables, herbs and flowers.”

Jerry said his and Kathy’s older son, Kelly Duvall, is an “integral part of the day-to-day functioning of Duvall farms.”

“From as early as can be remembered, Kelly has wanted to understand how things are put together and how they work. This natural curiosity to find out how things tick has made him an excellent diesel mechanic and cattleman. After spending years in construction in Little Rock, Kelly returned to farming and has passed down a love of farming to his children and grandchildren.”

Jerry said his and Kathy’s younger son, Jeremy, “always had a love for operating equipment and could read my hand signals when we were running separate equipment. … It was almost like one person running two pieces of equipment at the same time.

“He liked working with cattle more than chickens,” Jerry said. “I was in shock in 2011 when he wanted to start raising chickens on his own. I think it was so he could be close to his family. He didn’t like to be away from them for any length of time. Jayme became active in the broiler farm in 2013 after Jeremy was paralyzed in the car accident.”

Jeremy and Jayme are leaders of the Regal Clovers 4-H Club and are working toward bringing shooting sports to Conway County. Their daughters, Brooke and Payton, are active in 4-H and show animals at the county, district and state fairs. Both girls also show horses through the River Valley Riding Club. They both take clogging dance lessons and are involved in pageants and rodeo-queen contests.

He served as a deacon for many years in the Freewill Baptist denomination churches. He also served as a Sunday School teacher, a co-educational softball coach for the church league and a music director.

“I have participated in this manner for as long as I can remember,” he said. “I believe in the importance of servant leadership … serving people and doing some good along the way,” he said.