In central Arkansas, medical marijuana still not at hand 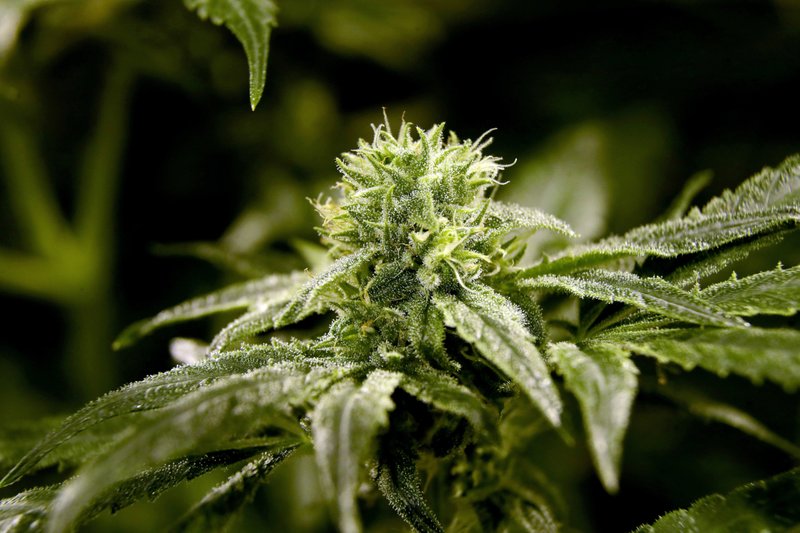 As more medical marijuana dispensaries begin to open across the state, Arkansas' most populous county remains a desert with the first dispensary opening still months away.

The delays have frustrated central Arkansas patients who expected more dispensaries to be open at this point -- nearly six months since the retail licenses were issued.

Three of the four companies licensed to operate in Zone 5 -- which includes Pulaski, Faulkner, Lonoke and White counties -- have been reluctant or unwilling to provide information to the Arkansas Democrat-Gazette about when patients can expect dispensaries in those counties.

LaRee Williams Treece, a medical marijuana patient from Little Rock, said the slow debut of Arkansas' medical cannabis program has been an ongoing frustration for patients, some of whom don't have access to transportation to any of the six retailers now operating.

"It's very disappointing. I can go out to Hensley," Treece said, referring to the Saline County dispensary Native Green Wellness Center. "But there's a lot of people who can't."

The Arkansas Medical Marijuana Commission first issued dispensary licenses on Feb. 5 after taking more than a year to evaluate the hundreds of applications for growing and selling licenses.

The commission was set up to handle medical marijuana business licensing under Amendment 98 to the Arkansas Constitution, which Arkansans approved in 2016, legalizing marijuana for medical use. The commission established eight zones to evenly distribute the state's first 32 dispensaries.

Progress has been slow on opening dispensaries in all eight zones. Court disputes, zoning issues and poor weather have been the chief causes of delays.

The six dispensaries that have opened since May 10 are at Hot Springs, Clinton, Helena-West Helena, Hensley and Mountain View.

As of a week ago, those dispensaries had sold $4.01 million of medical cannabis -- about 574 pounds, according to state figures.

Once operable, the dispensaries in Zone 5 will open access to many patients who rely on public transportation. The locations include:

Zones 1 and 5 have the fewest counties -- four apiece -- of the eight medical marijuana zones. According to 2018 estimates from the U.S. Census Bureau, Pulaski County has nearly 400,000 people. The next-most-populous is Benton County in Zone 1, with nearly 275,000 people. (A dispensary in Benton County is close to opening.)

Brian Faught, CEO of Natural Relief Dispensary, said the company is working hard to open by early October and possibly September if "all goes perfectly."

On Thursday, dirt was being moved at the Sherwood site to prepare the land for the construction of a new building. Faught said the company lost a little more than a month of construction time while it awaited a decision from City Hall on a zoning matter related to whether the dispensary would be permitted to grow the limited number of plants allowed under Amendment 98.

Faught said the company has been working hard since receiving the license to open its doors, and he said he fields numerous calls from patients eager for the Natural Relief Dispensary to open.

An official for Grassroots OPCO declined to give her name or answer questions about the dispensary's progress other than to say that the dispensary expected to open in October.

On Thursday, construction workers could be seen at Grassroots retrofitting the existing building into a dispensary.

On Thursday, it didn't appear that any work was being done at the Natural State Wellness Dispensary. The building -- formerly an art gallery -- appeared in the same condition it had been in since the gallery left the building, which is covered in murals.

The company, in its application, projected an opening date in November. However, a company spokesman told the Medical Marijuana Commission earlier this year that the dispensary could open in July or August, depending on whether the existing building could be retrofitted to serve the retailer's needs.

Also on Thursday, crews were working on the wiring at Harvest in Conway. An electrician, who asked not to be named, said the dispensary was still about 60 days away from opening.

Meanwhile, state regulators are keeping an eye on the new industry's progress.

"While the rules do not specify a date by which dispensaries must be operational, there is an expectation that the permit holder will serve patients within a reasonable time frame," agency spokesman Scott Hardin said in a written statement.

Hardin provided figures on business at each of the open dispensaries, listed below in the order of when they opened:

Besides Zones 1 and 5, the areas without dispensaries are Zones 3, 4 and 8.

Treece said many patients have lost hope. Beyond the delays, she said many doctors won't write the recommendations required to obtain a patient ID card, and the Arkansas Department of Health has been unwilling to add new qualifying conditions to the list of 18 conditions that qualify a patient to buy medical cannabis.

Treece said those are the main reasons she is one of the organizers of an effort to legalize the drug for full recreational use in 2020.

"It's really sad," she said. "I thought Little Rock would be one of the first places to get [a dispensary]." 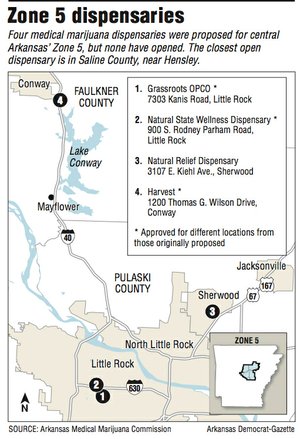