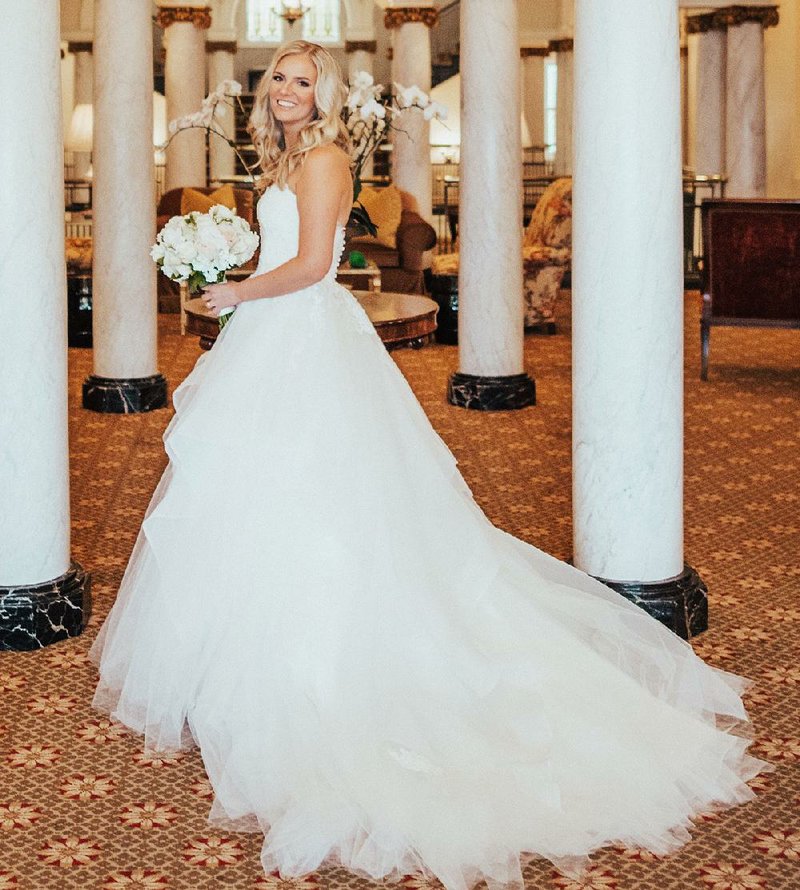 Donna and Willis Ray Kemp of Siloam Springs are the parents of the groom. He is the grandson of Velma and Willis Kemp of Haltom City, Texas, the late John Moore and the late Trula Moore.

Music was by Adrien and Lizbet Palmer of The Last City.

Given in marriage by her father, the bride wore princess-style gown with a strapless bodice embellished with lace, embroidery and beaded appliques. She carried a hand-tied bouquet of garden roses, freesia, ranunculus, hydrangeas and peonies in white, pale blush and light green colors.

Maid of honor was Victoria Gean of Little Rock, cousin of the bride. Bridesmaids were Anna Kathleen Plyler of Little Rock; Geenah Krisht of Los Angeles; Julia Daneshfar and Samantha Williams, both of Dallas; Kennedy Powers of Hot Springs, cousin of the bride; Natalie Kemp of Calabasas, Calif., sister of the groom; and Sarah Barlow of Memphis. They wore black chiffon gowns in the style of their choice and carried bouquets similar to the bride's.

The ballroom of the Junior League of Little Rock Building, where a reception followed the ceremony, was centered with a large arrangement of garden roses, hydrangeas and phalenopsis orchids in a white urn. Some guest tables held large arrangements of roses, orchids, ranunculus and hydrangeas in shades of white and pale blush and others held antique gold containers filled with wedding flowers.

The bride has a bachelor's degree in journalism and advertising/public relations from the University of Arkansas at Fayetteville. She is a business development manager at Paladin Staffing.

The groom has a bachelor's degree in economics and international relations from Boston University and is a law student at the University of Texas at Austin.

After a wedding trip to Madrid and Barcelona, Spain, the couple will live in Austin, Texas.