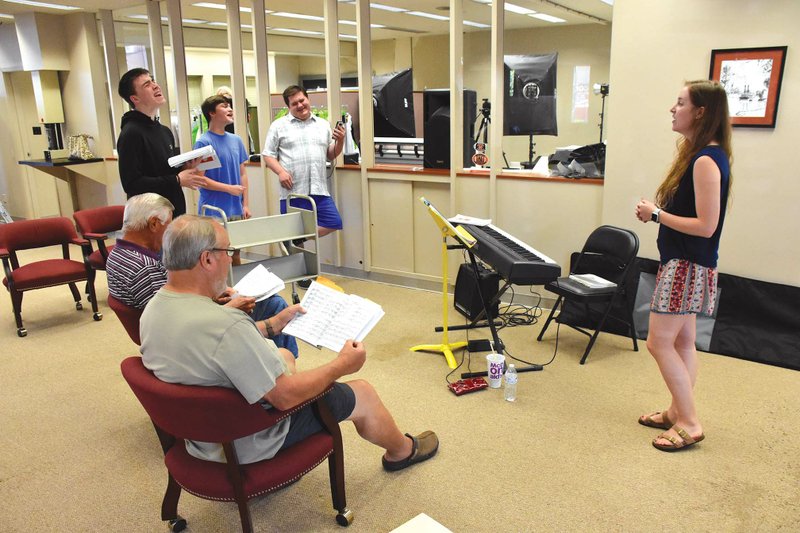 Rehearsing for the Jackson County Community Theater’s upcoming production of Meredith Willson’s The Music Man are, clockwise, from front left, Bob Stiger as Olin Britt, Dan Haywood as Oliver Hix, Malachi Gates as Ewart Dunlap and Jaxson Gates as Jacey Squires, who perform as members of The Quartet; David Norris, who portrays Harold Hill; and Olivia Goodon, who plays Marion Paroo. The musical opens Thursday at the Arkansas State University-Newport Center for the Arts. ( Staci Vandagriff)

NEWPORT — Harold Hill is coming to town, promising to organize a boys band, yet all the while planning to con the townspeople and abscond with their money. After meeting the town librarian, who also teaches music, Hill has a change of heart.

“This really just started out as a conversation between friends,” said Susan Johnson of Newport, president of the JCCT board of directors. “We were talking about how many talented people we have in our community and wishing we had a venue to showcase their talents, and three weeks later, we were holding rehearsals.”

“Several years ago, the high school drama teacher did two musicals — Annie and The Wizard of Oz — and brought in people from the community. I got involved with theater then,” she said.

“And years ago, as I was growing up in Little Rock, I was active in the First United Methodist Church, and they put on a musical every summer. I participated in those musicals from about sixth grade through the 12th grade. I even played Marion when they produced The Music Man,” Chadwell said.

“So when Susan Johnson asked me to be a part of organizing the Jackson County Community Theater, I agreed. We were brainstorming … trying to come up with the best musical we could present, and I recommended The Music Man. I told them I was familiar with it, … and there was no limit to the number of people that could be in it. Everyone agreed, … and here we are,” she said.

“We have people of all ages in this production. They range in age from 6 to 70. It’s family-friendly and has songs that people will recognize,” Chadwell said.

“Members of the planning committee said, ‘Since you recommended it, why don’t you direct it?’ I said, ‘Sure,’” she said.

“When I did the musical back in high school, I guess I was about 17. It’s amazing, now at 53, how much I remember of it. This is so much fun for me to do. Putting it all together has been a challenge, but so many people have stepped up. … It’s really a community effort,” Chadwell said.

“The cast is amazing. We have so much talent in this area. The young man who plays Harold Hill — David Norris — is a recent graduate of Arkansas State University in Jonesboro and is still living there while he seeks full-time employment,” she said. “He received his degree in theater, with a music minor. … His voice and stage presence are amazing. His family is from Judsonia.

“Our librarian, Marian Paroo, is played by a local resident, Olivia Goodon of Newport. She is a speech therapist and was involved in theater in high school and college. She and her husband, Josh, have lived in Newport about two years and are involved with the children’s ministry at First Baptist Church in Newport.”

“We have a grandfather, father and son,” she said. “The grandfather — George Hall of Newport, who is our 70-year-old — plays the illustrious Mayor Shinn; the father — Bill Hall of Tuckerman — plays a traveling salesman and appears in several scenes throughout the musical; and the son — Donovan Hall of Tuckerman — plays Tommy Djilas, the handsome, hard-to-handle heartthrob.

“This is the first time any of them have appeared onstage. They are having a good time.”

Chadwell also pointed out two sisters — Janet Walker and Charlotte George, both of Newport — who play Ethel Toffelmier and Alma Hix, respectively, who are Pick-A-Little Ladies.

Chadwick said the sisters “auditioned together and told us, ‘We don’t care what you cast us as; we just want our husbands to see us onstage.”

Other families represented in the show include siblings Dora Cook of Grubbs, who appears as one of the Wa-Tan-Ye Girls, and her brothers, Josh and Seth Cook, also of Grubbs, who are members of the chorus; brothers Jaxson and Malachi Gates of Tuckerman, who perform in The Quartet as Jacey Squires and Ewart Dunlop, respectively; and Dan Haygood of Newport, who appears in The Quartet as Oliver Hix, and his daughter, Carol Penix of Newport, who appears as Maud Dunlop, one of the Pick-A-Little Ladies.

• Kathryn Pearce of Newport appears as Zaneeta Shinn, the mayor’s daughter, who is in love with Tommy Djilas.

• Addy Sides of Newport plays Gracie Shinn, another of the mayor’s daughters.

• Ami Driver of Newport portrays Mrs. Squires, one of the Pick-A-Little Ladies.

• Bob Stiger of Newport plays Olin Britt, a member of The Quartet.

• Caleb Brandt of Newport plays a member of the chorus.

Other members of the Pick-A-Little Ladies Ensemble include Jennifer Ballard, Emily Davidson, Suzanne Lassiter and Julia Williams, all of Newport, and Luann Russell of Tuckerman.

Also appearing as Wa-Tan-Ye Girls are Kenly Long and Aubry Walton, both of Newport.

“No one in the cast really knew how to dance, so we’ve enlisted the help of Jackson County Dance & Cheer Inc. to help with one scene,” Chadwell said. “They perform the ‘Shipoopi’ dance number at the beginning of act 2. They are coming just to do this one number. They are bringing something to the show that we would not be able to do otherwise.”

Stage managers for The Music Man are Dr. Patti Mullins, a dentist in Newport, and Bambi Huff, Mullins’ dental hygienist.

Johnson said donations from area businesses, groups and community members are the primary source of funding for the production.

“The Jackson County Community Theater board would like to thank the numerous donors who have helped make this a reality,” Johnson said. “We would especially like to recognize these major sponsors: ASU-Newport, Cindy Ward in memory of Jane Parnell, Moving Jackson County Forward, Merchants and Planters Bank, George Kell Motors, C&C Distributors, Arkansas Steel Associates, First Community Bank, Unity Health, and Watson and Watson, Attorneys at Law.”

Tickets to The Music Man are $10 for adults and $5 for children 12 and younger. Tickets are available at all Merchants and Planters Bank locations in Newport and at the door on performance days.