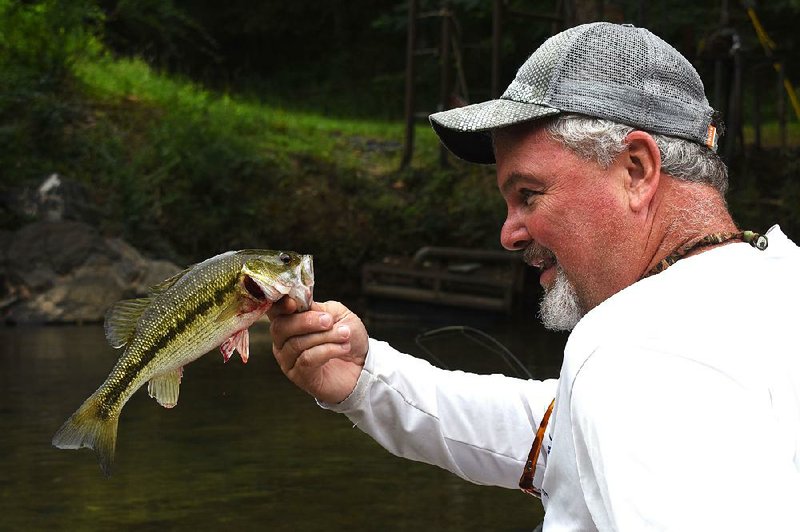 Joe Volpe of Little Rock admires one of the Kentucky bass he caught Monday while fishing with his son John Volpe and the author on the Caddo River. For more photos from the fishing trip, visit arkansasonline.com/84river/ ( Bryan Hendricks)

GLENWOOD -- If I could bottle a perfect fishing day, it would look a lot like Monday.

It began cloudy and warm, with a hint of rain. Thunder rumbled all around the Caddo River, but the clouds held their peace except for a few weepy minutes that dimpled the water.

About 4 p.m., the sky began clearing to the north, revealing a sky of rich, deep blue bracketed by white, puffy clouds. A gentle breeze ushered in a sublime taste of late September or early October. It made me happy to be alive, and a day like this is best spent fishing in the company of friends.

My, how the fish did bite. They started early and never stopped.

I desperately needed a day like that because I've been in a fishing funk all year.

I know why. I grew dependent on topwater lures. It is the most fun way to catch fish, but a topwater bite is situational and requires a convergence of conditions. Because I've used it so much, my skills for other, more dependable techniques eroded. With diminished success, my confidence eroded as well.

I have visited some of the same waters repeatedly this summer by design. As the Arkansas Democrat-Gazette heads toward eliminating its print edition for an electronic replica edition, there will be a greater emphasis on videos, color photo galleries and other vibrant, interactive features. It is easier for me to refine my videography techniques by drilling in the controlled environment of familiar places.

My companions were federal magistrate judge Joe Volpe and his son John Volpe, 16, of Little Rock. We intended to fish Kings River, but the weather forecast called for storms in north Arkansas. There was a chance of thunderstorms in Pike County starting about 2 p.m., by which time we expected to be off the water.

After a brotherly reunion with our buds at Lucky's Canoe Rental, the Volpes and I assessed conditions at the put-in at Caddo Gap. The air was cool and damp under a dense overcast.

Joe Volpe and I would share a canoe. John Volpe would be alone in a kayak. The river level guaranteed that we would have to walk the canoe through riffles and rapids, but that was an asset. Instead of blowing through those areas, we could take our time and fish them thoroughly on foot.

Also, the water was clear, with a slight emerald hue. The algae that clogged the stream and made fishing impossible several weeks ago was still present, but in much smaller concentrations. You can see it in a video that accompanies this article's online and replica versions.

Seldom do I catch a fish near the put-in, but I always try. The water has too much cover to ignore. We got our first bites sooner than usual, hinting at the greatness to come.

Some accountability is in order here. Joe Volpe got me hooked on a topwater lure called a Whopper Plopper several years ago. He is still trapped in his addiction, and it is the only lure he threw on this trip.

This was the day I kicked my habit. Knowing how difficult "cold turkey" can be, I had a Whopper Plopper. Even though I did throw it a few times, my primary offering was a Texas-rigged Zoom Mini Lizard in watermelon/cotton candy. My secondary rig was a Ned rig with a watermelon/red Z Man Finesse TRD.

I got bites immediately and frequently. I quickly exhausted a bag of lizards, so I opened a fresh pack in regular cotton candy. It's a much lighter color with a pinkish hue, and it showed up better in the available water conditions. The bite rate increased substantially.

Bass reacted curiously to Volpe's Whopper Plopper. Smallmouth bass swirled on it but would not take it. Kentucky bass, on the other hand, slammed it.

"Is there any objection to keeping a few of these?" Volpe asked.

"Keep them all," I said. "Smallmouths are the native species here. Kentucky bass are interlopers, and they compete with smallmouths for food and habitat. They actually outcompete. A fisheries biologist told me that, so bon appetit!"

John Volpe spent most of his time floating downstream while hanging on to his kayak. We traded good-natured trash talk, and I peppered John with jokes. He was not amused, which made it even better for me. I enjoy few things more than cracking jokes to a stone-faced audience. I get a lot of practice with Miss Laura and her sisters.

Joe trying to explain the jokes to his son made it even better.

"Yes it is," I retorted, deadpan. "All my fans at the Chuckle Bucket say so."

The fishing got better as a cool front blew out the clouds. My bass count was near 30, and Joe Volpe had half a dozen Kentuckies in the cooler. We were in a slow, deep, rocky pool when a big spotted gar shadowed Joe Volpe's Whopper Plopper. It closed in and snapped at the lure several times until it finally chomped. A huge fight ensued, and John cheered when Joe brought the fish aboard.

"Yeah, he likes to fry up the backstraps," Joe said. "They taste kind of like gator nuggets."

"It is if you like gator nuggets," Joe replied. "Kind of chewy. It's not my thing, but John loves them."

We were fishing a shady pool when the weather finally broke. John Volpe sharply criticized a local TV weatherman.

"How does the guy keep his job when he's wrong half the time," John protested.

"John, listen to me," I said. "If a Major League Baseball player hits the ball 30% of the time, he's in the Hall of Fame. You are trashing a Hall of Fame weather star."

I was stuck on 36 fish when we entered the last pool. Fish had long quit biting the lizard, so I switched to the Ned Rig. I caught three in rapid succession. I landed No. 40 wading as Joe Volpe drove his truck onto the gravel bar to take us away.

Joe Volpe texted the next day to report that gar nuggets were better than he remembered. 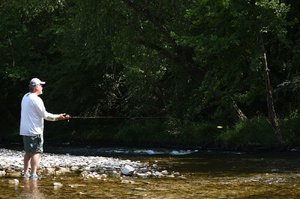 Photo by Bryan Hendricks
Joe Volpe casts a bone-colored Whopper Plopper in a narrow run on the Caddo River. 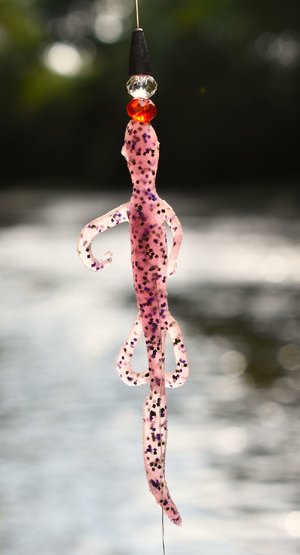 Photo by Bryan Hendricks
The author caught most of his 40 bass with a cotton candy-colored Zoom Mini Lizard.