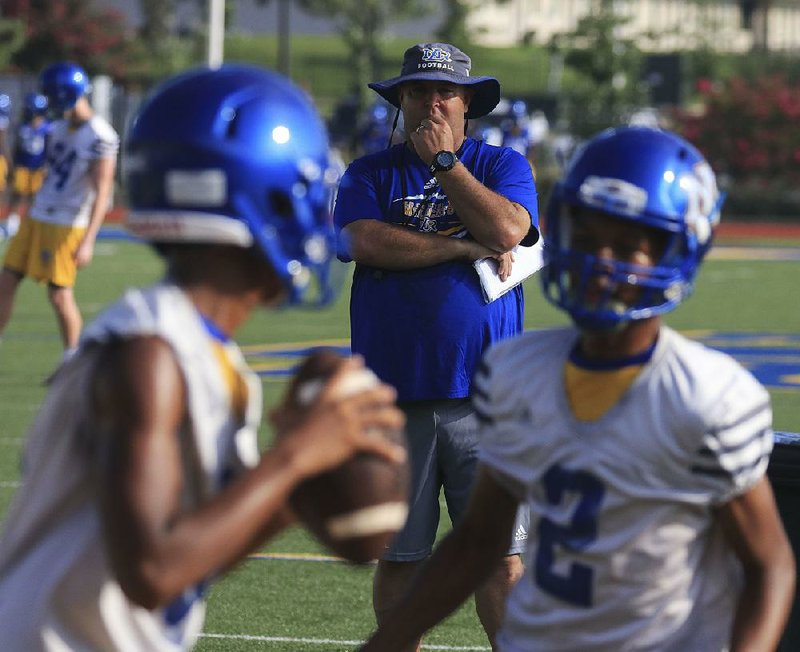 North Little Rock Coach Jamie Mitchell watches players go through drills Monday on the first day of practice. The Charging Wildcats will be without two of their top players heading into the new season. See more photos at arkansasonline.com/86NLRfootball. ( Arkansas Democrat-Gazette / Staton Breidenthal)

There hasn't been a lot of adversity in North Little Rock's football program over the past four seasons.

But the Charging Wildcats will be without two of their top players indefinitely, which will test a program that has played in the past three Class 7A state championship games.

Senior running back Brandon Thomas and senior defensive lineman Rashad Muhammad both suffered hand injuries during a Fourth of July fireworks incident. Coach Jamie Mitchell said Thomas has had at least three surgeries, and another one is scheduled for Aug. 16.

Thomas was at North Little Rock's first fall practice Monday with a cast on his right hand, while Muhammad had his third surgery Monday and was not at practice.

Losing the top offensive and defensive players is a blow to the Charging Wildcats, Mitchell said.

"Both of those guys have major injuries," Mitchell said. "They're both going to miss an extensive amount of time. That's just a shot to the gut for us. They're two of our absolute best players.

"But the train is going to roll on. We hope they heal well, but I know we're not going to have them for an extended time. We could not get off to a worse start. But nobody is going to feel sorry for us. We have to have some guys step up."

In Thomas' absence, North Little Rock will count on juniors Fred O'Donald and Aaron Sims in the backfield. O'Donald was on the varsity team last season as a sophomore, but he played sparingly behind Thomas, Oscar Adaway and Tyler Day.

Junior Kareame Cotton started all 13 games at quarterback last season. He'll be expected to take on a bigger role with the loss of Thomas.

Cotton is confident the offense will remain one of the best in the state, even without Thomas.

Mason Carlan returns for his senior season at left guard and is the Charging Wildcats' only returning offensive lineman. Carlan has committed to Air Force.

The Charging Wildcats will have one of the toughest nonconference schedules in the state, with three games against out-of-state opponents. They'll open against Tulsa Booker T. Washington on Aug. 31 in Bentonville, then host Memphis Whitehaven on Sept. 6. Then, for a second consecutive season, North Little Rock will play in the Battle on the Border at Independence Stadium in Shreveport, facing Baton Rouge Catholic.

Key 7A-Central Conference games for North Little Rock include an Oct. 4 home game against Conway and a showdown at defending state champion Bryant on Nov. 1.

Even with Thomas and Muhammad sidelined, North Little Rock expects to be among the state's top teams.

North Little Rock is 44-3 since an 0-4 start in 2015, including one state championship in 2017 over Bentonville. Its three losses were in the state title games in 2016 to Fayetteville and last season against Bryant, and a quarterfinal loss at Bentonville in 2015.

The loss to Bryant has been used for motivation all offseason, Mitchell said.

"It's haunted me," he said. "It's been without a doubt our motivator. Any coach and player in this [program] would trade those 44 for those two [state title losses]. This is a brutal, brutal job because you're remembered for the last game. It's not about the first 12. You're remembered for that last one.

"We've been there three straight years, but we've only one. The legacy you leave is what you do in the last game. Is that fair? Is that right? That's arguable both ways, but that's the nature of the beast."

Carlan wants to lead North Little Rock to War Memorial Stadium in Little Rock in December for a fourth season in a row.

"We've worked hard this offseason and we want to redeem ourselves," Carlan said. "We want to be a class that wins it. It's our last ride. For the last three years, every class has gone there. We don't want to be the laughingstock of North Little Rock. The pressure is on, definitely." 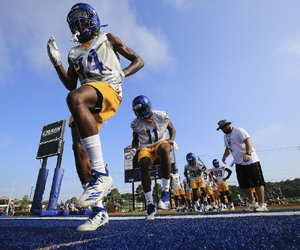 Charging Wildcats at a glance