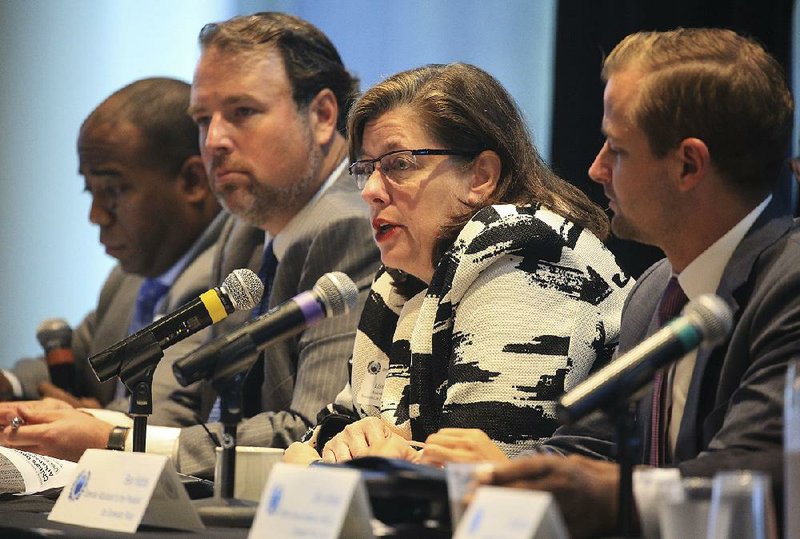 At an event on opportunity zones in Little Rock, Lisa Ferrell (third from left), developer of Rockwater Village in North Little Rock, speaks Monday along with panel members (from left) Jarrod Loadholt with Pine Street Strategies; Chris Caldwell, co-chairman of the Delta Regional Authority; and Ben Hobbs, special assistant to the president for domestic policy.

Little Rock officials are marketing the city's opportunity zones to potential investors in an effort to encourage cash flow into disadvantaged districts.

Mayor Frank Scott Jr. and U.S. Rep. French Hill of Little Rock unveiled a prospectus Monday at events with stakeholders from the public and private sectors. The prospectus outlined industrial activity and primary investments in the designated districts, and it touted the federal initiative as a way to revitalize the disadvantaged areas.

Opportunity zones are federally designated, economically distressed census tracts where, under certain conditions, new investments may be eligible for preferential tax treatment. Federal provisions that created opportunity zones were included in the Tax Cuts and Jobs Act of 2017.

Of the 85 designated opportunity zones in Arkansas, four are in Little Rock and encompass the eastern part of the city, much of downtown and the 12th Street area. Three more designated zones are in North Little Rock.

Little Rock Planning Director Jamie Collins said the department has spent the past several months putting together a pitch book for potential investors that highlights business activity in the designated areas over the past decade, as well as land uses and employment demographics.

Scott said taking advantage of opportunity zones is something Little Rock can do to encourage entrepreneurs to invest in areas that are in need of revitalization. Public officials should be intentional in making the conditions right for development, and the private sector should follow, Scott said.

"We have to make certain that we have infrastructure to even have that development in the first place," he said.

Hill, a Republican, noted that opportunity zones are not a new idea -- the concept originated in the 1970s -- but it was one of the first things he worked on with Scott, a Democrat, after Scott was sworn in as mayor.

"We want to make Little Rock the best city that it can be -- growing, safe and open to all," Hill said.

"I heard them say over and over again that the white man is doing to us what they did to the Indians. I see the rich get richer and the poor get poorer," Hampton said. "This is a great opportunity, but I don't see black folk at this time being able to take advantage of what we're talking about here today."

Scott said he wanted to ensure that opportunity-zone development was controlled growth, not gentrification.

"One of the things that I think city officials can do is go to communities and say: 'What businesses do you need in the community? What skills training do you need? What opportunities do you need?'" Ferrell said. "It's not just about the capital-gains tax benefit that goes to the few."

The boundaries of Little Rock's four opportunity zones are:

• Zone 1: Bordered by Interstate 630 to the north, University Avenue to the west, Charles Bussey Avenue and 20th Street to the south, and South Elm Street to the east.

• Zone 2: Bordered by Daisy L. Gatson Bates Drive to the north, Martin Luther King Jr. Boulevard to the west, Roosevelt Road to the south, and Scott and Cumberland streets to the east.

• Zone 3: Bordered by East Sixth Street to the north, Cumberland and Scott streets to the west, Roosevelt Road to the south, and the Union Pacific railroad tracks to the east.

• Zone 4: Bordered by the Arkansas River to the north, Interstate 30 and the Union Pacific railroad tracks to the west, Interstate 440 to the south and Fourche Creek to the east.

In North Little Rock, the opportunity-zone boundaries are:

• West 16th Street to the north, Fort Roots Drive and River Road to the west, the Arkansas River to the south, and Pike Avenue and the Union Pacific railroad tracks to the east.

• West 15th Street to the north, Pike Avenue to the west, the Arkansas River to the south, and Interstate 30 to the east.

Scott's chief of staff, Charles Blake, urged developers and money managers during a bus tour of the zones Monday afternoon to see the potential in vacant industrial buildings and for-sale signs.

Some of Little Rock's opportunity zones, such as the 12th Street corridor and part of east Little Rock, have seen more private investment in recent years in the form of medical buildings and breweries. Others are "ripe" for investment, Blake said as the bus rolled past a flat landscape of distribution centers and piles of scrap metal near Clinton National Airport/Adams Field.

Scott plans to announce in the coming days a task force that will focus on opportunity zones, which he said will include local leaders such as Ferrell as well as Will Rockefeller of the Winrock Group. 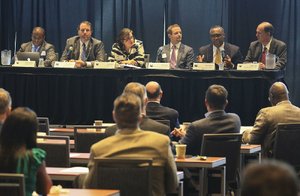 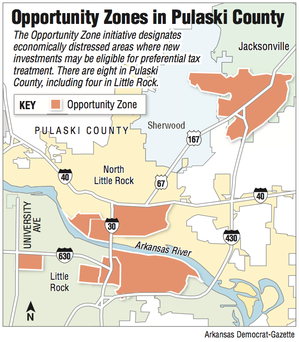