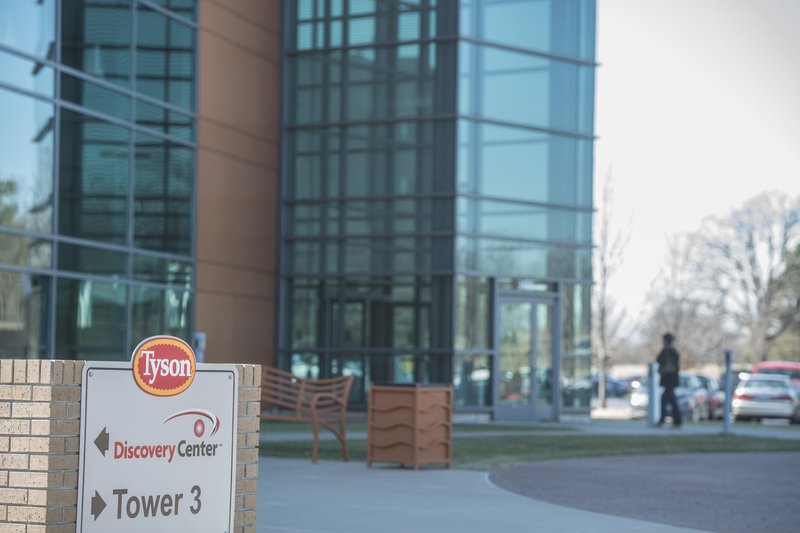 Tyson's beef and prepared foods businesses bolstered earnings, while chicken and pork lagged behind for the quarter.

"Our strategy remains focused on growing prepared foods, international and value-added chicken while reducing the volatility of earnings across our business -- and we're making progress," Noel White, Tyson's president and chief executive officer, said in a conference call Monday.

Tyson also told shareholders it had received a subpoena during the quarter from the U.S. Department of Justice seeking information related to a price-fixing investigation.

Sales rose to $10.89 billion, an 8% increase from $10.05 billion a year ago. Broken out by business beef, pork and chicken reported stronger sales, while prepared foods slid, compared to year-ago results.

Tyson's international businesses, listed as "Other" in the report, saw sales rise almost five-fold to $356 million, given recent overseas acquisitions of Keystone and BRF S.A. During the quarter, Tyson acquired four chicken plants in Thailand and two processing plants in the U.K. and the Netherlands for $340 million. Tyson bought Keystone, a processor of McDonald's chicken, in the first quarter.

Operating income, a measure of earnings after expenses, was $781 million, a 2% drop from last year's results of $797 million. Broken out, beef, pork and prepared foods reported lower incomes, while chicken and "Other" posted higher profits from a year ago.

Operating margins, measured as a percentage of sales, were 7.2% in the quarter, down from 7.9% a year ago.

At first glance, "nothing really jumped out at me," in the report, said Alan Ellstrand, associate dean at the Walton College of Business at the University of Arkansas, Fayetteville. The raw data is almost contradictory without context of what is going on, but in general, it is "slightly better in some cases and slightly worse in others, nothing great or terrible," he said.

The results for the quarter beat analyst expectations. Tyson reported adjusted earnings per share of $1.47, down from $1.50 a year ago. That came ahead of both Stephens Inc's estimate of $1.42 and FactSet's analyst consensus of $1.45.

"The company is continuing to make progress" with its prepared foods and international businesses and has an opportunity to improve its chicken business, said Stephens analyst Ben Bienvenu.

Chicken was a mixed bag for the quarter. It underwent a period of operational underperformance; in other words, not enough processing plants met their yield or efficiency expectations, Bienvenu said.

On paper, chicken sales climbed to $3.3 billion as Tyson added volume through recent acquisitions, but they were offset by a price decline of 11%. Its operating income rose 22% to $230 million, with a margin of 6.9%.

During the quarter, the business dealt with a slow start to the growing season because of cool, wet weather, but expects demand to pick up in the back-to-school season, White said.

Meanwhile, Tyson's beef and prepared foods businesses remained strong. Beef sales climbed to $4.1 billion on improved cattle availability and stronger demand, which pushed prices up a reported 2% in the quarter. Its operating income fell 15% to $270 million this quarter, with a margin of 6.5%.

"We are pleased the European Union has agreed to a new beef quota arrangement with the U.S.," White said looking ahead. "We also remain hopeful new trade deals will be reached soon with Japan and China, and that Congress will approve the pending trade deal with Canada and Mexico."

Prepared foods division sales of $2 billion were about a $43 million lower than last year's quarter, pushing prices up over 5% in the quarter. Operating income was $229 million.

Tyson said pork underperformed because of pressure created by the outbreak of African swine fever, a disease that has wiped out tens of millions of hogs in Asia. Because of the global shortage, U.S. hog costs have increased, but pricing has not been affected because of ample domestic supply, White said. However, this has begun to change. Agriculture Department data show signs of U.S. pork shipments to China accelerating in mid-July, which could benefit Tyson next quarter, he said.

Pork sales increased to $1.3 billion on improved domestic availability of live hogs, which pushed prices up a reported 7% in the quarter. Its operating income fell 37% to $42 million, with a margin of 3.2%.

Food products made with plants are part of that overall growth strategy. Earlier this year, Tyson debuted Aidells Whole Blends sausages, made of chicken, vegetables and grains, in stores. Last month, Tyson began shipping its Raised & Rooted nuggets, made with plants, to stores nationwide, White said.

"We're pleased to report the nuggets will be in 4,000 retail stores, and in broadline food service distribution, by the end of September," he said. The company is also in talks with customers to bring these products outside of the U.S.

In addition to Tyson's third quarter results, the company disclosed that it has received a subpoena from the U.S. Justice Department seeking documents and information related to the chicken industry. The government's investigation started after the filing of a price-fixing case in 2016 when foodpacker Maplevale accused some of the biggest poultry companies of artificially inflating broiler chicken prices for almost 10 years. Since that filing, dozens of groups, including Sysco, ConAgra and Walmart, have added their own claims against the chicken industry. In June, the Justice Department filed a motion to intervene and sought a limited stay of discovery in the civil action, so it could proceed with its own investigation.

"We are fully cooperating with the DOJ's request," Tyson said in a regulatory filing Monday. 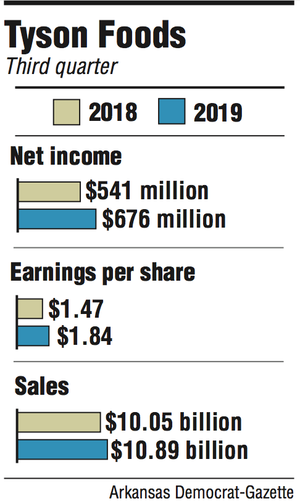