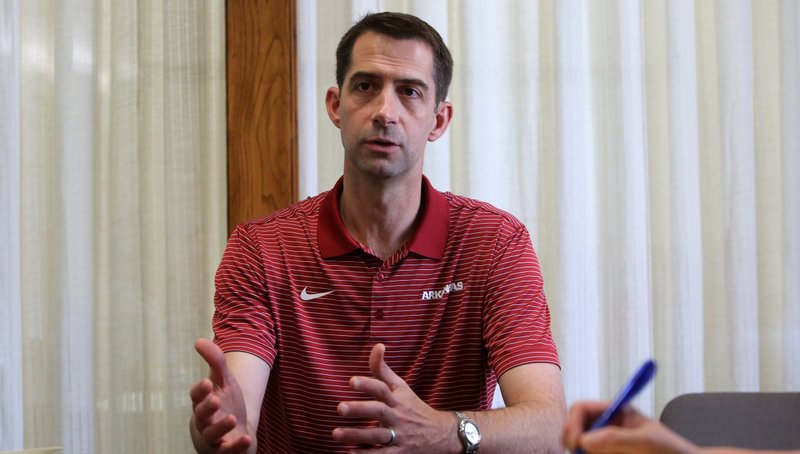 U.S. Sen. Tom Cotton said he intends to serve a full six-year term if Arkansans re-elect him to the Senate for a second time next year.

The Dardanelle Republican's name is ubiquitous in rumors about future appointments by President Donald Trump's administration and 2024 presidential candidates.

In a wide-ranging interview Wednesday with the Arkansas Democrat-Gazette, Cotton said he was focused on his 2020 re-election campaign. Thus far, only Fayetteville Democrat Josh Mahony has announced that he'll challenge Cotton.

[Video not showing up above? Click here to watch » https://www.youtube.com/watch?v=6Jeobwg7pk4]

Asked about a presidential run in five years, Cotton again pointed to next year's Senate campaign.

"I'm focused on the Senate campaign of 2020," he said. "These days, a week is a lifetime in politics, much less six years."

"Tom Cotton has made a lot of promises since being elected to the U.S. Senate, few of which he has kept," Keith Rosendahl, Mahony's campaign manager said Wednesday in a statement. "The truth is Arkansans don't need any more years of Senator Cotton representing Wall Street and Washington lobbyists. We need someone working to put the people of Arkansas first."

Cotton on Wednesday also discussed the recent mass shootings in Dayton, Ohio, and El Paso, Texas, as well as several pieces of legislation he's trying to shepherd through Congress. He is in Arkansas during a monthlong recess for lawmakers to return to their districts. The recess ends Sept. 6.

The senator said some of his main priorities when the Senate reconvenes will be passing the military spending bill before the end of the federal fiscal year on Sept. 30.

Cotton said he's also focused on guiding several bills through the Senate that individually would attempt to tackle rising pharmaceutical prices, cellphones in prisons and sales of unwashed poppy seeds.

The Senate Judiciary Committee in June approved Cotton's PACED Act, which would constrain what Cotton called "legal gimmickry" often used by pharmaceutical companies to protect patents and maintain high prices. He said it may get attached to some health-related legislation as an amendment. (The bill's name is the Preserving Access to Cost Effective Drugs Act.)

Allergan attempted to transfer the patents to an American Indian tribe, arguing that the sovereign tribe was immune from any federal review of the patent. However, a federal court upheld the authority of the U.S. Patent and Trademark Office's ability to review the patent.

The arrangement drew criticism from lawmakers of both parties.

Cotton said his legislation would codify the court's ruling in that case to ensure it becomes the law of the land. He said patents are intended to encourage innovation, and the pharmaceutical industry's abuse of those laws and other price-gouging tactics are immoral.

"We should reward and therefore encourage companies who put a lot of money at risk and scientists and doctors who do all this research to get breakthrough medicine sometimes that eliminate diseases altogether -- diseases that were once deadly killers," Cotton said. "We should not reward those companies and their lawyers for gaming the system to try to keep the prices of those medicines high."

Cotton said he's in ongoing conversations with "industry players" who believe that allowing the use of cell service jammers near prisons could be a slippery slope. He has introduced a bill that would allow states and federal prisons to utilize jammers.

U.S. Sen. John Boozman, a Republican from Rogers, has said that when there a vacancy in the executive branch, he receives constant phone calls asking whether Cotton would be interested in an appointment from Trump.

Asked about the rumor mill that surrounds him when there's a Cabinet vacancy, Cotton again said he was focused on serving Arkansans in the Senate.

"Sometimes those news stories in Washington are idle speculation and gossip," he said. "Sometimes they're people behind the scenes who are pushing a candidate for another job, but they need to have answers for new openings that creates. And if they don't have answers [reporters] in Washington won't buy their advocacy for their candidates for another job. And if they're just making it up, there's no real accountability for it. A lot of those stories that are sourced on background are just idle speculation."

Information for this article was contributed by John Moritz, David Barham, Karen Martin, Yutao Chen and Alyson Hoge of the Arkansas Democrat-Gazette. 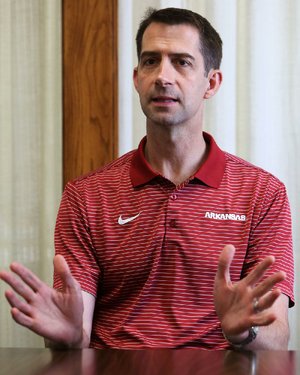 Photo by Jeff Mitchell
Getting a military spending bill passed before Sept. 30 is one of his top immediate priorities, U.S. Sen. Tom Cotton said in an interview Wednesday.