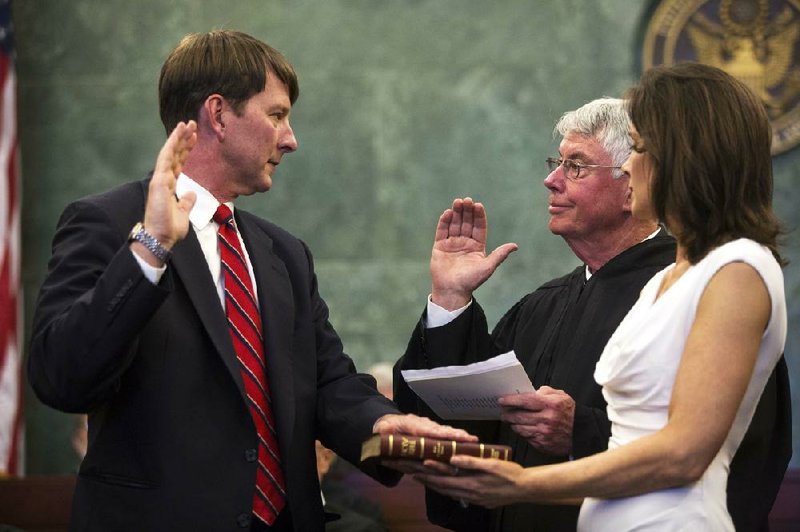 In this 2014 file photo U.S. District Judge James Moody Jr takes an oath while placing a hand on a Bible held by his wife Melinda and answers to his father James M. Moody Sr.

A Pulaski County woman challenging the state's two-year blackout period on campaign contributions for candidates for statewide office on Wednesday again urged a federal judge to try the case in October.

On June 17, in response to Peggy Jones' April 8 lawsuit, U.S. District Judge James Moody Jr. blocked the state from enforcing the challenged law, Arkansas Code 7-6-203(e), until he can consider its constitutionality. But the next day, the attorney general's office asked Moody to "stay" the injunction, allowing the blackout period to remain in effect while the 8th U.S. Circuit Court of Appeals considers the state's appeal. Moody agreed.

The law has been in place since being adopted by voters in 1996 as part of a package of campaign-finance amendments designed to combat corruption. But Jones says it infringes on her First Amendment rights by preventing her from donating now to people she wants to support in the 2022 election cycle.

Moody held a hearing June 12 to consider Jones' request for a preliminary injunction and the state's request that the law be left intact. He said during that hearing that he was concerned about whether Jones, as a donor instead of a candidate, had legal standing to pursue the case, since the law appears to penalize candidates, not donors. But after Jones filed an affidavit the next day identifying one of the candidates she wants to support for re-election -- Sen. Mark Johnson, R-Conway -- Moody granted the injunction.

Since Moody placed a hold on the injunction, attorney Chad Pekron of Little Rock, who represents Jones, has asked him to reconsider the stay, which Moody denied. Pekron has also filed a motion asking the 8th Circuit to expedite the appeal, which it denied.

The 8th Circuit ordered the state to file its appeal brief by July 29, which it did, and said the case will be set for oral arguments before a three-judge panel during the week of Sept. 23-27 in St. Louis.

Pekron's latest effort to move the case along came Wednesday when he asked Moody to set a scheduling conference to get a trial date reserved on his October calendar. Pekron has already asked that Moody expedite the pretrial information-gathering process, while the state has argued that expedited discovery isn't necessary and that a trial shouldn't be scheduled until 2020.

But that date, Pekron said in his latest filing, would be "on the verge of the issue in this case becoming irrelevant for the 2022 election cycle."

He argued that the state's appeal "is based almost entirely" on the issue of whether Jones has standing -- a vested interest in the outcome of the case -- to pursue it. Pekron said that to address the standing issue quickly, he has filed a proposed amended complaint that he believes "addresses the standing defects that [the state] incorrectly claim exist."

Moody hasn't yet ruled on whether he will allow the lawsuit to be amended.

Meanwhile, Pekron, along with other attorneys at the Quattlebaum, Grooms & Tull law firm in Little Rock, told Moody that Jones "believes there is no reason that this case should not proceed on the merits during the pendency of the appeal."

In a June 24 motion asking the 8th Circuit to expedite the appeal, Pekron wrote, "While this appeal is pending, [Jones] cannot engage in First Amendment activity," and said that "absent expedited briefing, [her] First Amendment rights will continue to be infringed until close to the time that this case becomes moot (at least for purposes of the 2022 election cycle) by its own terms."