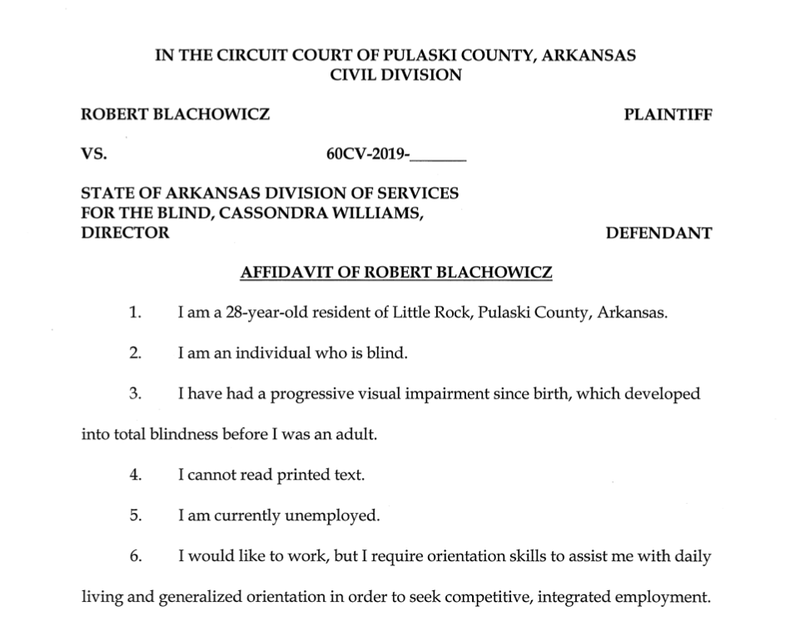 This screenshot shows the first page of an affidavit filed along with a lawsuit against the Division of Services for the Blind.

A watchdog group dropped its lawsuit against the Division of Services for the Blind on Thursday, saying the government group had promised to provide services to its client.

Disability Rights Arkansas represented Robert Blackowicz, of Little Rock, in the lawsuit filed late Wednesday afternoon against the Division of Services for the Blind and its director Cassondra Williams.

Blackowicz, 28, alleged in the suit he was denied orientation services to learn to live and work independently while blind. But Thursday, following conversations between the groups, the division promised to enroll him in orientation.

A Little Rock resident suing the Division of Services for the Blind contends that the division is not providing federally mandated services that would help him live independently.

The lawsuit, filed in Pulaski County Circuit Court on Wednesday, also alleges that the division didn’t properly notify the public or have any hearings regarding the service cut. It cites the Arkansas Administrative Procedures Act and requirements from the U.S. Department of Education, which provides the division’s funding.

Blackowicz claims that the division, which operates under the newly formed Arkansas Department of Commerce, abruptly cut his orientation services in August.

[DOCUMENT: Read affidavit, lawsuit filed against Division of Services for the Blind]

Individuals who go to orientation learn skills necessary to live and work while blind.

“The Arkansas Department Of Workforce Services has been recently been made aware of a lawsuit involving the Services For The Blind," reads an emailed statement attributed to Charisse Childers, director for the Division of Workforce Services. "As a result, we are looking into the allegations. It is our clear intention and goal to make sure that everyone qualified receives all the services they are entitled.”

The Division of Workforce Services operates under the Arkansas Department of Commerce.

Representatives from the governor’s office were not immediately available for comment.

The issue, the lawsuit claims, stemmed from a funding shortage in the division that occurred when it moved from the Arkansas Department of Human Services under Gov. Asa Hutchinson’s transformation plan. When the division moved, it had to change its name and refile paperwork with the federal government to get its funding.

“DSB [Division of Services for the Blind] is not fully funded,” the lawsuit reads. “DSB has extremely limited funding and is not providing mandated services to its consumers as a result.”

The name change initially resulted in an interruption of tuition payments for division clients, which has since been resolved.

“The complete disregard of DSB to fund services that are mandated under federal law is appalling,” said Tom Masseau, the disability rights executive director in a statement. “Clients of DSB should not be forced to go without needed services while the Division leaders review current policies. Further, the Division is required to solicit public comment when changes are made to their approved state plan. When they plugged one hole, another erupted.”

Blachowicz is engaged and has a five-month-old child, according to his affidavit.

“Every day that I am unemployed will continue to impair my employability in a competitive, integrated environment,” Blackowicz’s affidavit reads. “With the current services provided by Division of Services for the Blind, I am neither independent, nor employable.”