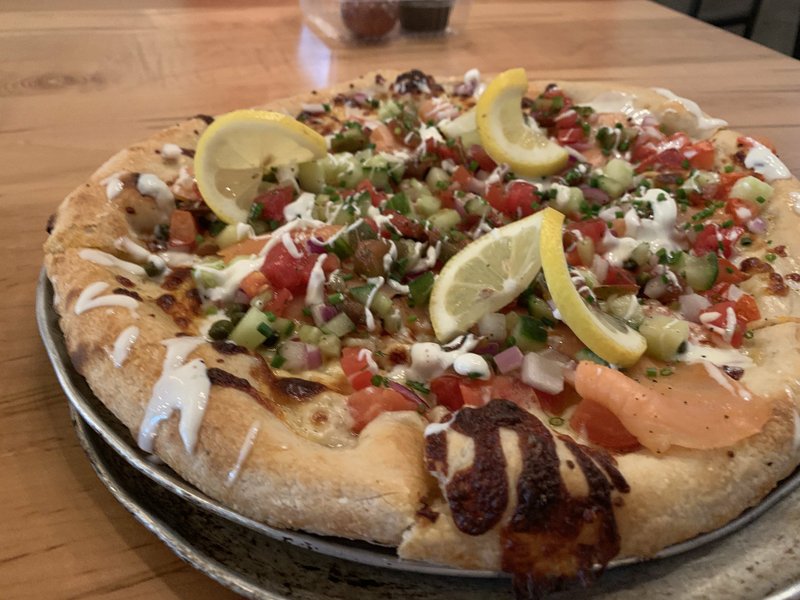 The Lox Pizza has been so popular for brunch at Raduno Brick Oven &amp; Barroom that it's now also on the daily lunch/dinner menu. Arkansas Democrat-Gazette/Eric E. Harrison

Raduno Brick Oven & Barroom recently revised its menu, adding a handful of new appetizers, a couple of new sandwiches and a couple of new pies to its list of 12-inch Neapolitan-style pizzas.

Broadening and brightening up its offerings will undoubtedly help the pizzeria/restaurant/bar stay in step with the increasing competition, especially as restaurant/watering holes have been proliferating in the SoMa neighborhood along Main Street, south of Interstate 630. Raduno's was a pioneer in the 'hood, starting out as Piro's.

Next-door to SoMA's oldest established establishment — Midtown Billiards — Raduno serves pizza as its principal provender, but now the menu shifts the focus slightly to its range of usual and unusual appetizers. And we were pleased to encounter a few items we'd return to enjoy again.

Raduno's decor hasn't changed appreciably — blonde-wood tables for two and four with orange patio-style, bucket-shaped chairs line the north side of the shotgun-style space with a long, capacious bar along the south wall. The only alteration, even in the few months since we last got a pizza to go there, is that the drink specials, wines and local brews now have their own table menu instead being chalked on the blackboard behind the bar.

Out of the nearly dozen appetizers, the new Arancini ($9) practically leapt out at us: three large (slightly smaller than a tennis ball) pimento cheese-stuffed fried balls of risotto sprinkled with shaved Parmesan. It's not unique to this market — we'd encountered the Sicilian dish at Boulevard Bistro in the Heights — but filling 'em with pimento cheese enlivens them considerably. They don't really need accompaniment, but a little cupful of marinara sauce mightn't be a bad idea.

The assortment of cured meats, cheeses, fruits, nuts and vegetables on Raduno's Antipasto Board ($19) changes regularly, but the board we got was practically overloaded with slices of sopressata, cappicola and prosciutto; chunks of Brie, Gorgonzola and white Cheddar; thin-sliced tart apple and cucumbers; chunks of beets; pistachios, cornichons, pickled okra, Mandarin oranges, banana peppers, Craisins, candied walnuts, olives, dates and slices of small tomatoes; plus a handful of lightly toasted Boulevard Bread baguette slices and little cups of fig jam, stone-ground mustard and honey. We're sure we're forgetting something. After completing a major pig-out, we did leave a few scraps, particularly the beets, which we generally shun — no offense to the chef.

Sandwiches come with your choice of chips, Mista or Caesar salad, or soup; we chose Raduno's gazpacho ($5 cup, $7 bowl a la carte), a smooth-blended-with-added-back chunks cold soup of fresh tomatoes, cucumbers, green bell peppers, red onion, mint, dill and lime drizzled with creme fraiche. It was a bit spicier than we either anticipated or wholly liked. Raduno's tomato basil soup ($4/$6), accented by Parmesan, a balsamic glaze and focaccia croutons, was also spicier than we expected, but not so spicy that we couldn't finish it.

Raduno's Lox Pizza ($17) has been so popular for brunch, and justly so, that the Raduno's folks decided to add it to the daily lunch/dinner menu. It's a mouthful — smoked salmon, extra virgin olive oil, cucumber, red onion, capers, tomatoes, fresh dill, chives, black pepper and the house-made creme fraiche on a firm, slightly chewy, medium-thin crust — and a handful. (Having bits of things fall off onto the metal pizza plate is a pretty good indication that there's a little too much stuff on top).

Zeppoles ($6), fried ricotta balls similar to beignets, are a dessert on the lunch/dinner menu and an appetizer for Sunday brunch. They come with a cup of house-made raspberry jam, which helps keep them interesting because otherwise they're pretty much just dough; for an additional 75 cents, you can enhance them with injections of lemon curd, which we recommend.

Raduno's serves "bottled water" — tap water in what used to be wine bottles. You can choose something alcoholic from a list of local brews, a list of on-tap stuff from hither and yon, a list of wines by the glass and the bottle, and a selection of specialty cocktails. Soft drinks, of course, plus iced tea and, primarily at brunch, coffee served in open coffee cups and not mugs, which if customers linger cools off kind of quickly.

Service was exceptionally good on all our visits; we were particularly well taken care of.