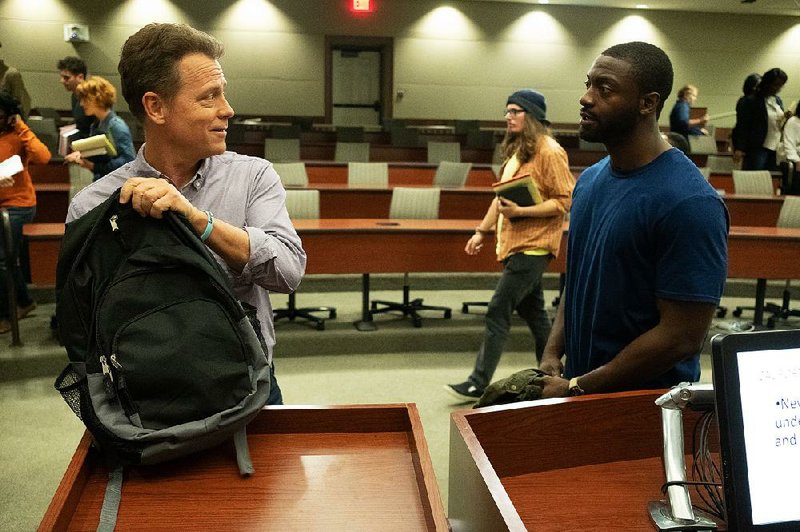 Alfred Hitchcock was famously obsessed with the innocent man, falsely accused. In To Catch a Thief, The Wrong Man, North by Northwest and other films, he used the premise to create tantalizing suspense. Despite a similar setup -- false accusation and its aftermath -- and despite some moments of true suspense, the film Brian Banks isn't quite Hitchcockian in the same way. Based on a true story, and anchored by a charismatic lead performance by Aldis Hodge in the title role, this multifaceted drama uses the framework of a courtroom procedural, not to thrill but to explore how our criminal justice system casts aside some of the same people it should protect.

The decision by director Tom Shadyac and screenwriter Doug Atchison to tell the story out of chronological order is important to the film's success. We first meet Hodge's Brian, not as a scared kid -- at 16, the promising high school football player was accused of rape and kidnapping by a classmate -- but as a sharp, collected adult, one who is striving to succeed despite bad legal advice, a prison sentence and having to register as a sex offender. Hodge's character is an archetype: the soft-spoken hero with values. After smaller roles in such films as Straight Outta Compton, the actor delivers a performance that demonstrates that he has the potential to become a star.

Rating: PG-13, for thematic content and related images, and for language

Brian finds a glimmer of hope in Justin Brooks (Greg Kinnear), an attorney who heads the California Innocence Project. Kinnear is well-cast: Like a jaded game show host, he can appear slick and disaffected, yet can still project emotion. At first, Justin is reluctant to help: the burden of proof to clear Brian's name is extraordinary, and Justin has seen the system fail too many times. An opportunity for redemption, however, presents itself in an unlikely form: Brian's accuser (Xosha Roquemore) reaches out via Facebook to "make amends," as she puts it. This leads to a thorny plan, whereby Brian must convince several reluctant people that he deserves justice.

At first glance, Shadyac -- a filmmaker better known for comedies like The Nutty Professor and Liar Liar -- seems like an odd choice for this material. Perhaps he is dipping his toes into serious material, as Peter Farrelly (Dumb and Dumber) recently did with Green Book. Regardless, it turns out that Shadyac has a flare for plausible melodrama. Brian's story contains several twists, so many that you may gasp more than once.

But it's the quieter, character-driven moments that are so rewarding. All the characters guard their feelings here, and this is never clearer than in a tender, painful scene in which Brian and his love interest (Melanie Liburd) commiserate. (They're both victims, albeit in different ways.) It returns to the theme that piece of mind is the only path to freedom -- even while you're in prison. In a small role as a prison counselor, Morgan Freeman delivers wisdom that echoes the lessons that his character learned in The Shawshank Redemption.

Arriving as it does at the height of #MeToo movement, Brian Banks faces a challenge: we are predisposed, now more than ever, to believe the accuser. Yet the film overcomes that challenge in two ways: not only is history on its side, but the film shows how many of its characters -- even Brian's accuser -- confront pervasive indifference. On one level, Brian's story is meant to be inspirational; the real Banks would ultimately go on to play in the NFL. But it is also a painful reminder of how young black people still face overwhelming disadvantages. The film leaves you wondering: What might have happened if Brian hadn't been a talented linebacker?