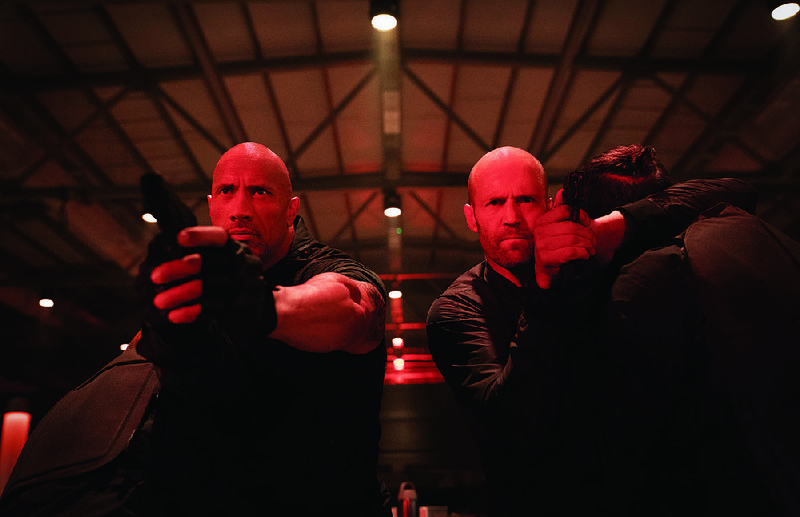 Dwayne Johnson (left) and Jason Statham star as an American operative and an English gun-for-hire in Universal’s action spinoff Fast & Furious Presents: Hobbs & Shaw. It came out on top at last weekend’s box office and made about $60.8 million.

Universal's gas-guzzling action spinoff, Fast & Furious Presents: Hobbs & Shaw, debuted in theaters last weekend to about $60.8 million in domestic ticket sales, easily taking first position as it opened in a period of summer where it is likely to encounter little competition.

Hobbs & Shaw made even more money internationally: It brought in an additional $120 million overseas, according to the studio. Combined, that makes for a worldwide weekend take of $180.8 million.

That's a solid opening with plenty of room for growth. The Fate of the Furious, which is the most recent movie in the main series, opened to about $100 million domestically in 2017. Those figures didn't make for great news at the time -- that release was the first time in years that a movie in the franchise had opened to slower domestic ticket sales than its predecessor.

But Hobbs & Shaw is different in that spinoffs aren't expected to do as well as their main series counterparts. (See Rogue One: A Star Wars Story, which was considered a success when it opened to tens of millions of dollars less than Star Wars: The Force Awakens in 2016.)

"It's super encouraging and really tells about how broad this franchise plays," said Jim Orr, the studio's distribution chief. "We are obviously all extraordinarily excited to see this homegrown Fast & Furious franchise break out down another avenue."

Reviews for Hobbs & Shaw have been somewhat solid -- it currently holds a 67% fresh rating on Rotten Tomatoes. And ticket buyers gave it an A- grade in CinemaScore exit polls.

"The tremendous global result last weekend demonstrates that a potent combination of actors with great chemistry and a director in David Leitch with a strong vision can deliver a loyal fan base a new and exciting chapter," Orr said. "The cast and filmmakers did an incredible job making this movie fun, thrilling and original while staying true to the Fast & Furious DNA that audiences have come to expect."

Finishing at a distant second was Disney's The Lion King, which has been a smash success for the studio but slowed to about $38.2 million in domestic sales during its third weekend, a roughly 50% decrease from its second weekend, according to Comscore, which compiles box office data.

At No. 3, Columbia's Once Upon a Time ... in Hollywood added $20 million in its second weekend, a 51% drop, for a cumulative $78.8 million. Analysts had predicted the film would earn $20 million to $22 million last weekend. The film, which cost $90 million to make, has a way to go before it's profitable. But the film's glowing reviews and early Oscar buzz should lead to a long run.

In fourth place, Columbia's Spider-Man: Far From Home added $7.7 million in its fifth weekend for a cumulative $360.3 million. It stands at $1.08 billion in global receipts.

Rounding out the top five, Disney's Toy Story 4 added $7.1 million in its seventh weekend for a cumulative $410 million. It stands at $959.3 million in global grosses and will likely become Disney's fifth film to cross $1 billion before its theatrical run is over.

At No. 6, Universal's Yesterday added $2.4 million in its sixth weekend for a cumulative $67.9 million.

In eighth, Paramount's Crawl added $2.1 million in its fourth weekend for a cumulative $36.1 million.

The studio's Honeyland expanded into five locations after debuting in two theaters last weekend. It grossed $37,671, for a per-screen average of $7,534 and a cumulative $81,827.

Music Box Films opened Piranhas in one location to $3,049. The film will expand into nine additional locations today and boasts a 50% rotten rating on Rotten Tomatoes.

"While the summer has kind of taken a drubbing, critically and analytically, it has made a huge comeback," said Paul Dergarabedian, senior media analyst for Comscore. "We need to get it in perspective. But it ain't over 'til it's over."

This week, Warner Bros.' debuts the crime drama The Kitchen, Lionsgate premieres the horror film Scary Stories to Tell in the Dark, Paramount opens the family-friendly Dora and the Lost City of Gold, Fox reveals the drama The Art of Racing in the Rain and Bleecker Street opens the drama Brian Banks.