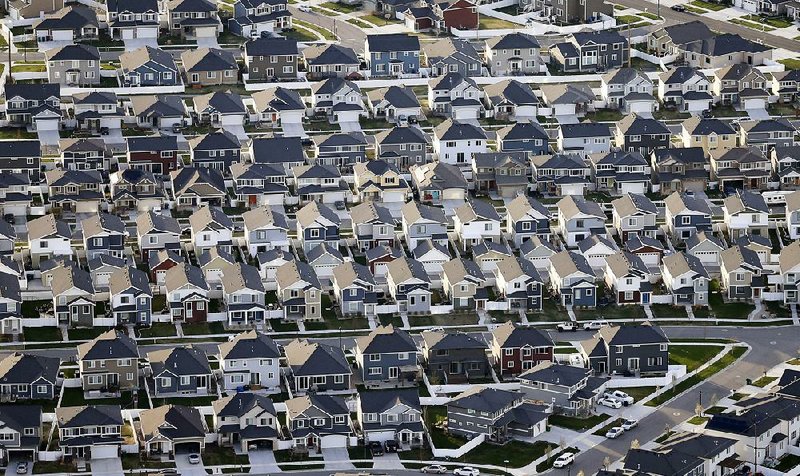 Mortgage rates on U.S. homes like these in suburban Salt Lake City have dropped to levels not seen since November 2016.

Financial markets around the globe have been rattled by anxiety over the U.S.-China trade war, sending investors fleeing from stocks to the safety of bonds and pushing bond interest rates to record lows.

Mortgage buyer Freddie Mac -- the Federal Home Loan Mortgage Corp. -- said Thursday that the average rate on the 30-year mortgage dropped to 3.60% from 3.75% last week. A year ago the rate stood at 4.59%.

The roiling markets reflected fears that trade tensions between the U.S. and China could cripple global economic growth. Before Monday's 3% drop in the S&P 500 U.S. stock index, investors hadn't seen a loss of even half that size since mid-May.

On Aug. 1, President Donald Trump rattled markets when he promised to impose tariffs on Sept. 1 on an additional $300 billion in Chinese imports that haven't already been taxed. China struck back on Monday, allowing its yuan to weaken against the dollar. The weaker currency negated some of the effects of the U.S. tariffs but created the risk that countries could start to competitively weaken their currencies, destabilizing markets and the economy.

Also last week, the Federal Reserve cut in its benchmark interest rate for the first time in a decade. The Fed made the quarter-point rate reduction with the aim of countering the impact of Trump's trade wars, stubbornly low inflation and global economic weakness. The risk of a recession in the U.S. remains relatively low.

Fed Chairman Jerome Powell left open the possibility of future rate cuts, but perhaps not as many as Wall Street had been hoped for. The Fed's rate cut unwound some of the credit tightening from last year, when rates were raised four times.

Freddie Mac surveys lenders across the country between Monday and Wednesday each week to compile its mortgage rate figures.

The average doesn't include extra fees, known as points, which most borrowers must pay to get the lowest rates.

The average fee on 30-year fixed-rate mortgages was unchanged this week at 0.6 point. The average fee for the 15-year mortgage also was steady, at 0.5 point.

"Mortgage rates fell to fresh multiyear lows this week as intensifying trade tensions rattled markets," said Matthew Speakman, a Zillow economist. "This week's escalation of the conflict greatly overshadowed a series of market-moving economic reports, including July's jobs data, typically the most-watched report each month, and pushed mortgage rates down sharply, as investors sought the safe haven of government bonds. With a light dose of economic data on deck for the coming week, the market's attention will likely remain on gauging the impact of the trade war on the global economy."

The yield on the 10-year Treasury note sank to three-year lows this week as trade tensions with China escalated, global economic growth slowed and moves by central banks across the globe made investors anxious. It fell to 1.71% on Thursday and hasn't been above 2% this month.

Bond yields move in opposite directions of prices. When demand for bonds is high, prices rise and yields fall.

Long-term bonds tend to be the most reliable indicators of where mortgage rates are headed. However, home loan rates haven't declined as sharply as the 10-year yield.

"The big move down in Treasury yields has not yet translated into similarly lower mortgage rates," said Michael Becker, branch manager of Sierra Pacific Mortgage in White Marsh, Md. "Mortgage-backed securities have not rallied as much as Treasurys. This often happens when Treasury yields drop quickly."

Bankrate.com, which puts out a weekly mortgage rate trend index, found that half of the experts it surveyed say rates will move lower in the coming week. Becker is one of the experts predicting rates will continue to fall.

Meanwhile, falling rates caused mortgage applications to pick up. According to the latest data from the Mortgage Bankers Association, the market composite index -- a measure of total loan application volume -- increased 5.3% from a week earlier. The refinance index jumped 12% from the previous week, while the purchase index fell 2%.

The refinance share of mortgage activity accounted for 53.9% of all applications.

"The lowest mortgage rates in well over two years led to a surge in refinancing, with activity up 12% last week and 116% from a year ago," said Bob Broeksmit, Mortgage Bankers Association president and chief executive officer. "Purchase applications also continue to trend higher than year-ago levels, but activity has decreased in recent weeks. Concerns about the economic outlook and stock market volatility are likely causing some prospective buyers to delay their home search."

The association also released its mortgage credit availability index this week that showed credit availability decreased in July. The index edged down 0.4% to 189 last month. A decrease in the index indicates lending standards are tightening, while an increase signals they are loosening.

"Credit availability in July decreased overall, driven by declines in the conforming and government indices," Joel Kan, an association economist, said in a statement. "Conditions tightened some for borrowers with high loan-to-value ratios and lower credit scores. One outlier was the jumbo index, which increased to its highest level since the inception of this survey in 2012."

Information for this article was contributed by staff members of The Associated Press and by Kathy Orton of The Washington Post.