Six decades show value of The Diary of Anne Frank 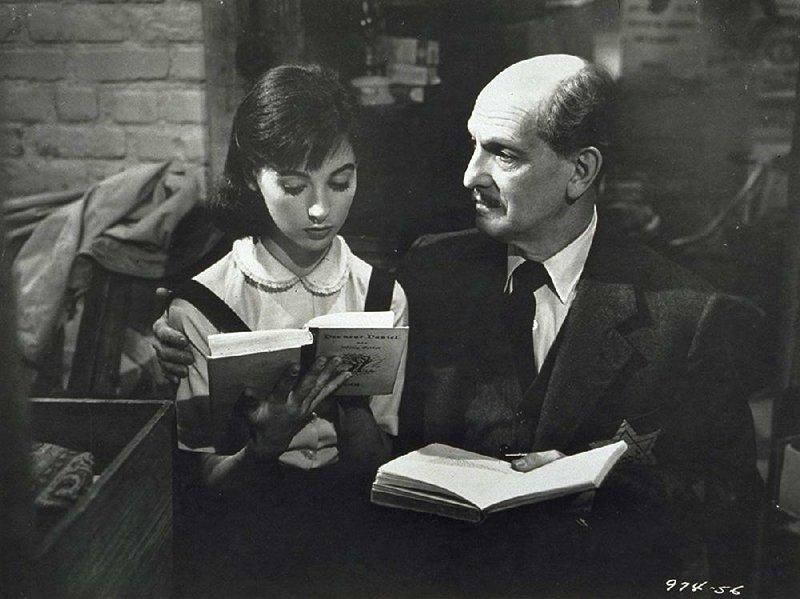 Millie Perkins, who made her film debut in the title role of The Diary of Anne Frank, was a model who had never studied nor aspired to be an actress before director George Stevens saw her photos on the covers of several magazines and convinced her to read for the part. She’s shown here with Joseph Schildkraut, who played her father, Otto Frank, in the 1959 film.

This year marks the 60th anniversary of the release of The Diary of Anne Frank, a film that tells the true story of a young Jewish girl, her family and four others hiding in the attic of an Amsterdam spice factory during WWII.

I saw this film in Augsburg, Germany, in 1959 and, as a 6-year-old, learned the enormity and importance of the Holocaust story.

Perhaps those feelings were reinforced by the fact that we lived some 31 miles from Dachau, one of several concentration camps where Jews and others deemed by Adolf Hitler unfit to live were incarcerated and killed.

My father took us to visit what was left of the infamous concentration camp where thousands were killed or died from starvation and disease. I still get shivers when I recall that visit. Even though he never said it, my father wanted me and my siblings to know what had happened there and that we should never forget it. I haven't forgotten.

As we toured the site the idea that one man could cause so much death and destruction was made evident by the gas chambers and ovens where the Final Solution was put into service.

And watching Diary brings all that horror back -- as I know how the story ends. But the acting, dialogue, music and cinematography are so good, I get lost in the film.

The credits roll with Alfred Newman's beautifully uplifting score, which channels young Anne's positive attitude and optimism about life. Otto Frank (Joseph Schildkraut) returns to the house -- after Germany has surrendered to the Allied forces -- where his and another family went into hiding in July 1942. He breaks down after finding a glove that belonged to Anne. He is heartbroken because he can't find the diary that Anne kept while they were hiding in the attic. The two people who hid the Franks and the others show him where the diary was kept. He starts reading and thus begins the story of the hiding place.

Speaking of Newman's score, he wrote a lovely waltz for incidental music during the intermission, which reminds us of a Europe long gone -- before Hitler came to power.

Producer/Director George Stevens spent several years getting the production in gear. Screenwriters Albert Hackett and Frances Goodrich wrote the film and play based on Anne Frank: The Diary of a Young Girl. It won the Tony award for best play and Hackett and Goodrich won the Pulitzer Prize for drama during the play's run of 717 performances on Broadway.

Stevens had said his World War II experiences changed him, and he never made another comedy or musical after 1943's The More the Merrier.

After World War II began, Stevens joined the Army Signal Corps and was in charge of a combat motion picture unit for two years. The following explains his raison d'etre for making Diary. This is from IMDB: "In addition to filming the Normandy landings, his unit shot the liberation of Paris and the liberation of the Nazi extermination camp Dachau, and his unit's footage was used both as evidence in the Nuremberg trials and in the de-Nazification program after the war. ... Many critics claim that the somber, deeply personal tone of the movies he made when he returned from World War II were the result of the horrors he saw during the war. ..."

"The images of war and Dachau continued to haunt Stevens, but it also engendered in him the belief that motion pictures had to be socially meaningful to be of value. ... The major carryover from his prewar oeuvre to his postwar films is the affection the director has for his central characters, emblematic of his humanism."

Stevens chose to film in black and white as he believed it would heighten the drama, according to IMDB. He also shot some scenes in near darkness, forcing the viewer to really concentrate on the details. And he filmed most of the outside footage in the actual location in Amsterdam where the hiding place was situated.

Starting in 1954, all Fox A-list films were made in CinemaScope, the first widescreen process readily embraced by most of the studios. In order to create the claustrophobic effect needed for the hiding place, Stevens had the sets built with several small rooms, low ceilings and columns on each side of the largest room, so the viewer would feel the tight spaces and the world closing in on the characters.

Stevens even said of CinemaScope: "It's fine if you want a system that shows a boa constrictor to better advantage than a man."

The film runs three hours, and 20th Century Fox reportedly made Stevens cut 20 minutes of running time in order to keep it from being a 200-minute film. But the three hours move swiftly.

Audrey Hepburn was one of the actresses up for the part of Anne, but she turned it down, saying she was too old to play a 13-year-old girl (she was 30) and that her own memories of living through that time in Amsterdam would be too painful for her to bear. Natalie Wood was also considered. Susan Strasberg, who played Anne on Broadway, turned down the part. It eventually went to Millie Perkins, 22 at the time, who had never acted before.

The film won three Oscars: best supporting actress for Shelley Winters as Mrs. Van Daan; best black and white cinematography; and best black and white art/set decoration. It was also nominated for best music score by Newman, best film, best supporting actor for Ed Wynn as Mr. Dussell and best director for Stevens. Ben-Hur was the big winner at the Oscars that year, taking home 11, a record at the time.

According to IMDb, Winters donated her Academy Award to the Anne Frank Museum in Amsterdam, after promising Otto Frank that she would if she won the award. It is on display in the museum still.

The film was mostly a critical success, however some critics were not enamored of Perkins. I think her innocence and naiveté are perfect for the character. But the film was not a commercial success. Some 60 years on, its excellence is obvious, at least to this moviegoer. And it serves as the "before" story with the memory of Dachau as the "after" story.