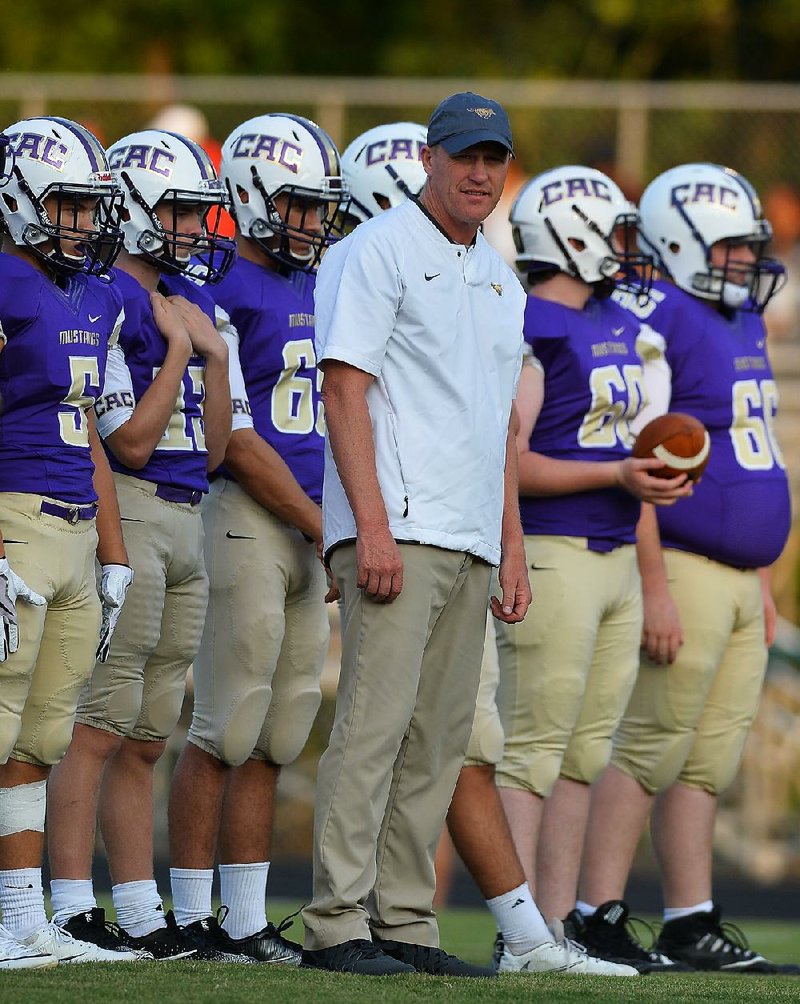 Central Arkansas Christian Coach Tommy Shoemaker said he can understand why the Mustangs have been picked to finish fifth in the 2-4A Conference, an eight-team conference with five first-year coaches.

Mustangs at a glance

CAC (5-6, 4-3) tied for third in the conference but was seeded fifth after tiebreakers and ended the season with a 44-14 playoff loss to Warren.

"That's where we finished last year," he said.

But this team's foundation, Shoemaker said, is strong enough for the Mustangs to challenge for the conference title, and maybe even rival the success of the 2015 team that finished 11-2 and advanced to the state quarterfinals.

"We have experienced guys coming back," Shoemaker said. "And we have some size up front. That year we had some size. This year we're actually a little bigger. Very similar I think."

It starts at left tackle with senior Brandon Bishop (6-6, 300), and spreads across the offensive line to junior right tackle Jeremiah Wingfield (6-0, 280).

Senior Austin Cook (5-7, 180) fills the other guard spot after manning center one year ago.

"They are big," Shoemaker said.

It helps that Shoemaker has 5-10, 160-pound junior quarterback Palmer Gilbrech (1,606 passing, 15 touchdowns, 11 interceptions) running a Spread offense that was reinstalled after a one-year experiment with the Wing-T during that 1-9 2017 season.

"I think he's got a chance to be the best quarterback in our conference," Shoemaker said. "One thing about him is he's really tough. He gained a lot of respect from teammates."

Gilbrech was at the helm last season when the Mustangs returned to the Spread, a transition Shoemaker said took most of last season to perfect.

"The kids got better," Shoemaker said, "but not nearly as good as we needed to be. There's so many details you have to learn and these kids didn't know it.

"Now, you can see it. We're just so far ahead compared to last year."

Shoemaker said he is comfortable with the depth and overall talent at the skill positions despite the loss of several productive players.

Sophomore Tyler Williams (5-7, 170) will be the primary running back after producing on the freshman team, but junior Ethan DeMarco (24-93 rushing, 1 TD) will assist.

Shoemaker said while the Mustangs will run a uptempo no-huddle attack, it won't be just a bunch of quick throws.

"We are probably more of a dropback passing team," he said. "We pride ourselves in being able to screen."

Gentry has been moved from outside receiver to the slot.

"Talented kid," Shoemaker said. "We need to get the ball in his hands, he's one of those guys."

Many of the offensive starters also will play on defense, including linemen Bishop, Wingfield and Morris.

Inside linebacker will be manned by DeMarco and Nathan Velek (5-11, 165). Cole Shoemaker, the coach's son, and Cook are battling for time at one of the outside linebacker positions with Jenkins holding down the other side.

Garrison, Caden McCluskey and Miller will rotate at safety.

The Mustangs will get a lift when Maumelle transfer Carlito London becomes eligible in Week 5.

He will step in at cornerback.

"He can lock 'em up," Shoemaker said.

Put it all together, and Shoemaker said the Mustangs are a confident bunch with a little bit of a chip on their shoulders.

"The kids know what we're doing, and I feel like we can execute at a high level," Shoemaker said. "We've still got a few things to put in, but not much. We're getting real good at it."